Secret filming has exposed a scandal for disabled people - Canary 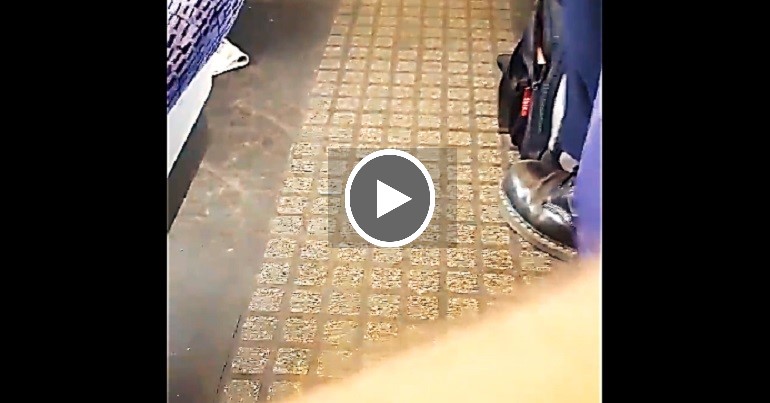 Secret filming by disabled activists has added to a growing controversy over disability rights. It’s also backed up their argument that some of the UK’s biggest companies are breaking the law.

Disabled People Against Cuts (DPAC) activists Paula Peters and Keith Walker were on a Southeastern train to Lewisham, south London. They filmed a driver telling them that he and his colleagues did not know how to work the disabled ramp on the trains:

Straight from the horses mouth . Drivers have keys to disabled access ramps, but @Se_Railway not trained drivers to use them . @paulapeters2 @ABCommuters pic.twitter.com/4JSQ3VDYqr

This admission by a driver highlights a growing issue across parts of the rail network. Because until recently, guards and station staff would support disabled passengers on many train operators’ routes. But now some are cutting these staff to leave only drivers.

Peters told The Canary this is “indirectly” discriminating against disabled people:

Train drivers have a generic key to access the entire train, which includes the yellow wheelchair ramps on the station platform. But train drivers have not had training from the rail companies in how to use the ramps to assist disabled people and passengers who require assistance. Train drivers say it is down to platform staff, train guards and conductors to assist passengers to access the train as it is not their responsibility. So, disabled people are indirectly discriminated against.

As The Canary has been documenting, some train companies are introducing Driver-Only Operation trains (DOO). This would mean the scrapping of guards on services, with only a driver on board some trains. DPAC and the Association of British Commuters (ABC) have been warning about the risks of scrapping guards. For example, disabled passengers would have to book support 24 hours in advance to get on and off trains. Also, Southern Rail is scrapping full disabled access at 33 stations. The groups claim both these measures would breach the Equality Act 2010.

We are determined to improve the facilities and services that are accessible to disabled passengers. We currently offer an Assisted Travel Passenger Reservation Service (APRS) and we also work closely with Network Rail to make as many stations as accessible as possible.

But Peters is not confident. She said:

The role of the train guard is a vital necessity to assist disabled people’s independence. Northern, Southern, Greater Anglia* and South West trains are trying to remove guards. So it’s important now more than ever that people get involved to support the say ‘No2DOO’ campaign. It’s about all passenger’s safety and our access needs. And that is everyone’s fight, as transport is the lifeline of our communities so we can go about our daily lives.

Train operators’ access issues for disabled people beg the question: what century are we in? And why, in 2018, are disabled people having to fight for their most basic rights? The answer is sadly straightforward. Because we have a privatised rail service, train companies are more concerned with profit than passengers. And as is often the case, disabled people are on the sharp end of the drive to make money.

*In some cases guards will remain, but may not have responsibility for opening and closing the doors.

This article was updated at 4.30pm on Wednesday 2 May to reflect a clarification on Greater Anglia’s position.

– Support DPAC, Transport for All and the ABC.

– Join the ‘Oppose Driver Only Operation’ rally at parliament on 25 April.