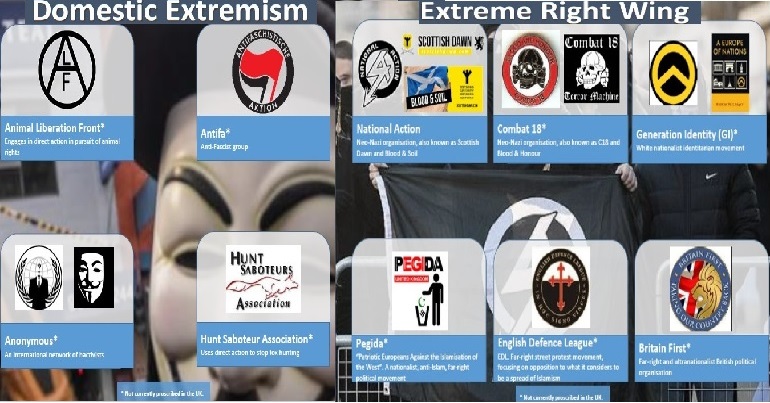 An “official” document from British “counter-terrorism” police lists anti-fascists, animal rights campaigners, and supporters of the Kurdish-led anti-terror fighters of the YPG as extremists – alongside neo-nazi and other far-right extremists.

The Canary appears to be the first organisation to reveal the existence of this document, entitled Extremist Symbols and Flags. We discovered this document online among training materials for the government’s ‘counter-radicalisation’ Prevent programme. 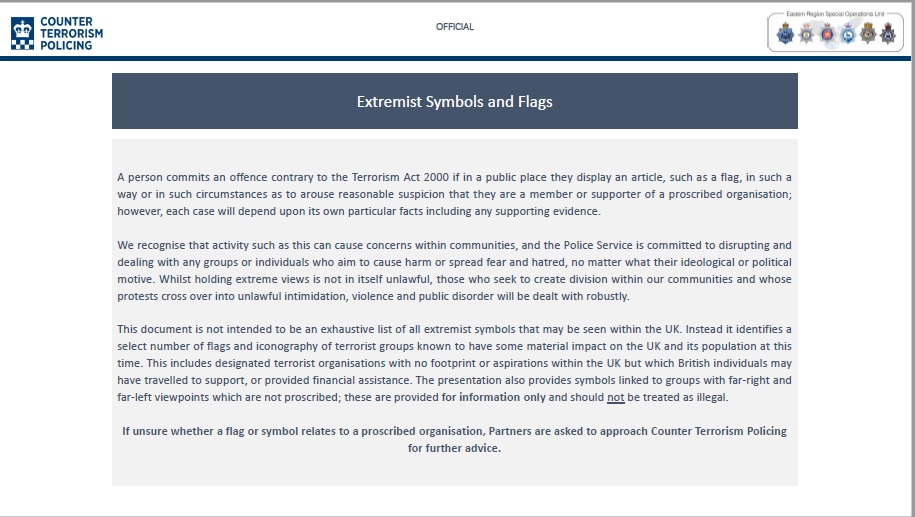 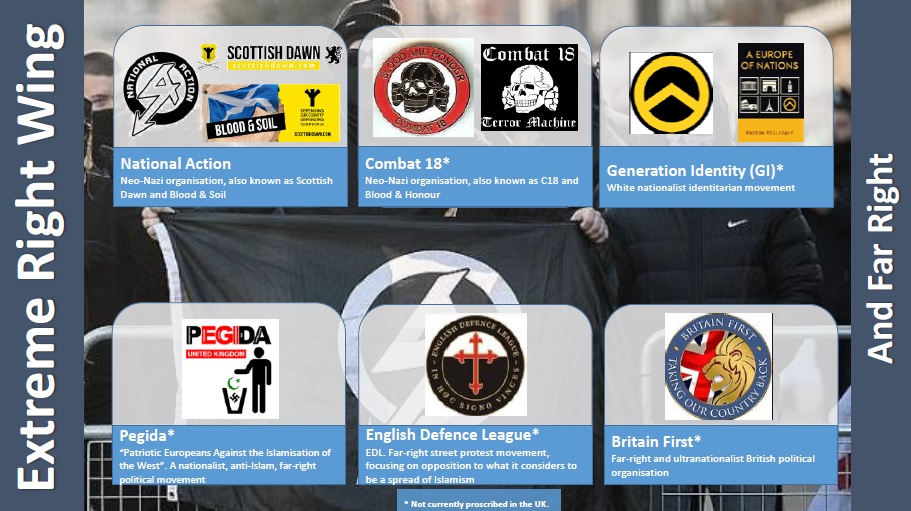 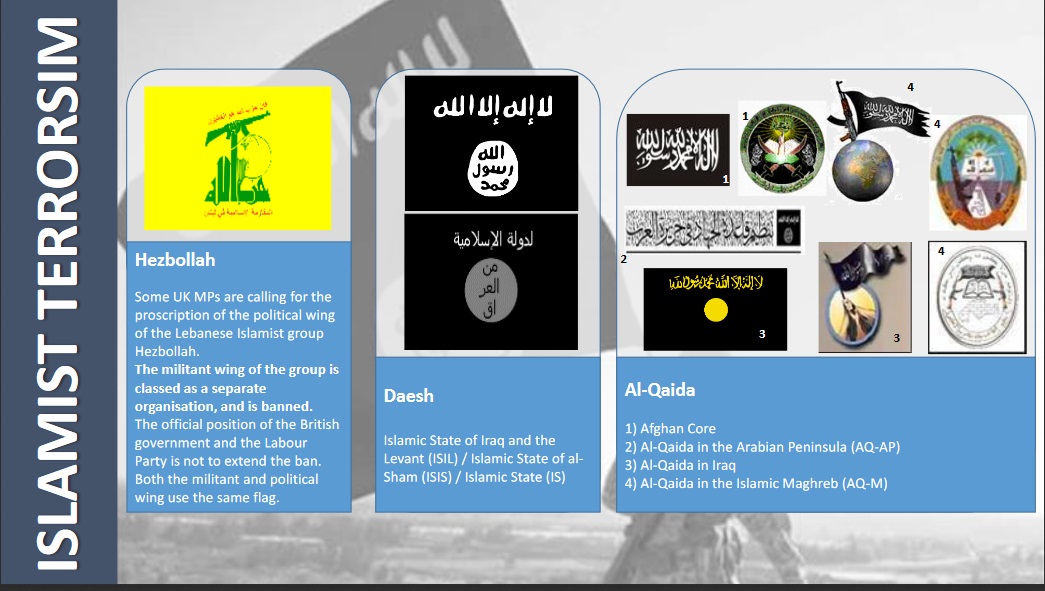 It is unclear whether the document, by “Counter Terrorism Policing” of the “Eastern Region Special Operations Unit”, was produced specifically for implementing the PREVENT strategy.

We found the document within the “Safeguarding Topics” section of the Suffolk Safeguarding Adults Board (SAB) website. It was in the “Resources” section of a page entitled “Prevent and Vulnerable to Radicalisation”.

The British state typically fights tooth and nail to avoid revealing such documents.

We would not issue, in any format, to a member of the public or the media flags or symbols that are used to represent and promote a proscribed organisation. It would not be appropriate to do so.

The organisations that are proscribed, the flags and the symbols often change or evolve and officers would be briefed with the most up to date information when the circumstances required it, for example a demonstration when a proscribed organisation is expected to attend.

The ‘both sides’ argument: when authorities see dissent and resistance as extremism

Alongside far-right Islamist and nationalist extremists, the ‘counter-terrorism’ document also listed the following as ‘domestic extremists’: 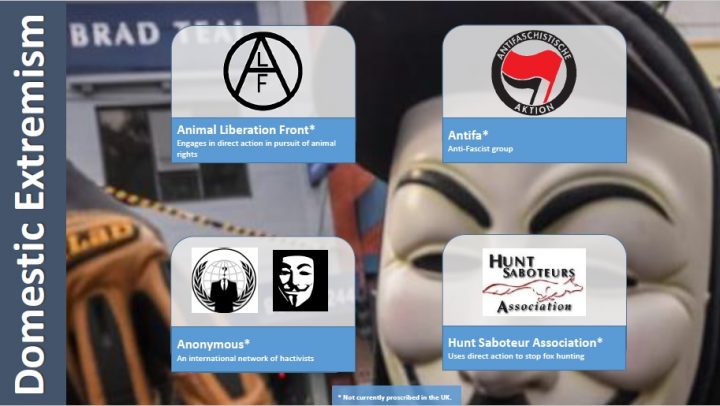 Kevin Blowe, coordinator of the Network for Police Monitoring (Netpol), told The Canary:

This document shows how completely subjective the terms ‘domestic extremist’ and ‘extremist symbols’ are: no wonder the police and the government have failed to pin down a legally robust definition.

Both the Animal Liberation Front and the Hunt Saboteurs Association are included because of political policing’s obsession with animal rights campaigners, but the ALF is now inactive and, since 2005, the focus of hunt saboteurs is on documenting and preventing illegal hunting, although they are still more likely to face harassment themselves from police who turn a blind eye to breaches of the Hunting Act.

Anonymous seems to have made it onto the list solely for repeatedly annoying the Metropolitan Police with the annual Million Mask March.

As for the Antifa symbol, it is widely used by anti-fascists across the world, from individual groups to football supporters. I have one on my diary. Are the police suggesting all anti-fascists are so-called ‘domestic extremists’ and, if so, are they ‘committed to disrupting and dealing with’ all of them?

But it wasn’t just the groups above that the ‘counter-terrorism’ team decided to include in the Extremist Symbols and Flags document. They also attacked some of the main groups fighting against Daesh (Isis/Isil) in Syria and Iraq: 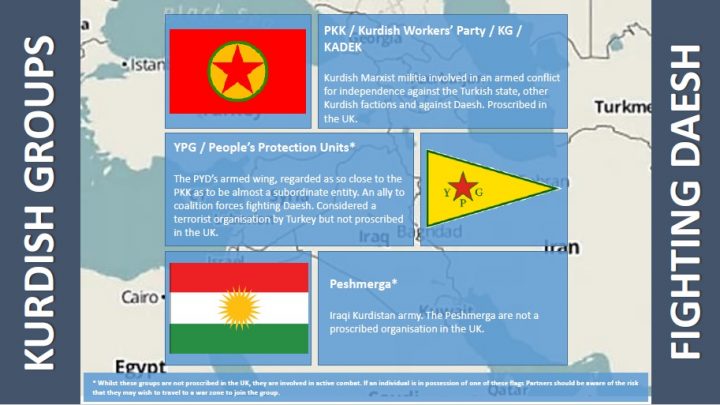 Dr Les Levidow, of the Campaign Against Criminalising Communities (CAMPACC), slammed the document as:

As this guidance illustrates, the vague criteria/requirements of the Prevent programme are predictably turned into an agenda for stigmatising political dissent, perhaps intentionally…

Hence even Andy Burnham has denounced the Prevent programme as ‘toxic’ and has encouraged alternatives.

Arun Kundnani, who specialises in theories of radicalisation and counter-terror policy, told The Canary:

The misidentification of protest and liberation movements as extremist is the logical result of the Prevent policy, which offers no plausible definition of extremism yet seeks to make “extremism” the basis for surveillance and criminalisation.

Possession of some of the images contained in this document, we are told, is itself a criminal offence. Local officials are therefore advised not to do online research on the images for fear they will incriminate themselves. That in itself tells us how Kafkaesque our counter-terrorism laws now are: that even to research extremism might itself be criminally extremist.

Moreover, the document conflates the symbols of legitimate movements, such as Antifa, with groups like al-Qaeda and Daesh. For good measure, the flag of Kurdistan is included as a supposed extremist symbol. And the word “caliphate” is listed as likely indicating an extremist mindset.

This point was also made by Blowe, who said:

The inclusion of Kurdish symbols is a disturbing indication of the largely under-reported interest by counter-terrorism police in Kurds living in the UK. The idea, however, that an individual in possession of a YPG flag is at risk of travelling to a war zone to join the group, rather than simply showing their solidarity with resistance to Daesh, is a frankly absurd leap.

Levidow, who also works with the Peace in Kurdistan Campaign, criticised the labelling of the YPG as “almost a subordinate entity” of the PKK. The YPG is a Kurdish-led organisation made up primarily of Syrian residents, unlike the PKK – which was founded in Turkey. Although they share the same political philosophy – of Democratic Confederalism (not ‘Marxism’ as the document says flippantly), they are separate organisations.

This document provides a crucial and disturbing view into the thinking of the British state and the ‘training’ of increasing numbers of doctors, teachers, nurses and other public servants in the ‘identification’ and reporting of ‘signs of radicalisation and extremism’.

As Blowe told The Canary:

If this is a basis for referrals to the Prevent programme, then it is little wonder that so many people are falsely identified as a ‘risk’.

Although there has been extensive resistance to Prevent, there is still a long way to go before such resistance leads to the dismantling of the state surveillance apparatus that appears to be just as concerned with suppressing dissent and undermining legitimate movements for self-determination as it is with preventing extremist violence directed against innocent civilians.

The more people stand up against this disturbing system the better.

Disclosure: The author of this article also volunteers with CAMPACC.

– Support the work of the Network for Police Monitoring (Netpol).

– Join The Canary to ensure we can keep publishing articles like these. 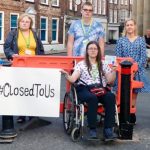