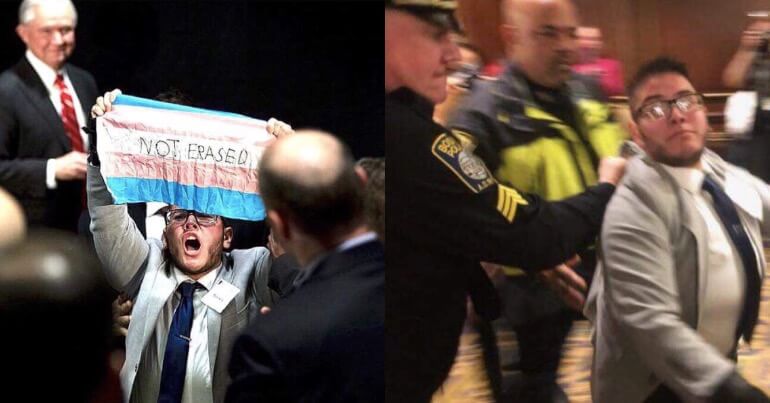 Disabled trans activist Mateo Cox ended up in hospital after Boston Police allegedly removed him forcibly by his neck from the “Future of Religious Liberty” conference. He and two Christian pastors protested peacefully to attorney general Jeff Sessions at the conference. But while the pastors left unharmed, Cox ended up in hospital after sustaining injuries to his neck, ankle and shoulder.

Cox has now spoken out to The Canary about his ordeal, and what it represents in today’s US society. Denouncing the Trump administration’s numerous attacks against him, he insisted “we need our allies more than ever”.

Cox was peacefully standing up for the transgender community following a memo from the Trump administration planning to define transgenderism out of existence by defining gender as strictly either male or female. As The Canary explained previously, this would have a massive impact on both trans and intersex people who wouldn’t fit into that simplistic definition.

The proposed changes are consistent with Jeff Sessions’ stances on transgender legislation. In October 2017, for example, Sessions sent a memo to agencies clarifying that “gender identity, per se” doesn’t apply to the civil rights law prohibiting job discrimination.

Following Sessions’ speech at the Future of Religious Liberty conference, Cox peacefully protested by holding up a transgender flag that had “NOT ERASED” written on it. This is in reference to the #WontBeErased movement for solidarity with transgender people threatened by the Trump administration’s latest memo.

Cox also confronted Sessions, yelling “Mr Jeff Sessions, we will not be erased”. Boston Police then proceeded to forcefully drag Cox out by the neck without his wheelchair, injuring him in the process.

The injury, ableism, and double standards from the police 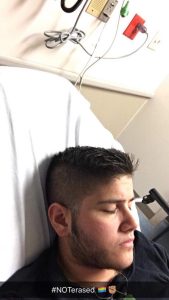 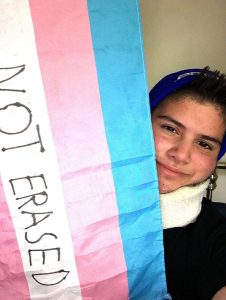 The protesting pastors, meanwhile, appeared to receive different treatment from Cox. They were listened to for almost 30 seconds before simply walking out the room.

Religious leaders interrupt Attorney General Jeff Sessions' speech: "Brother Jeff, as a fellow United Methodist I call upon you to repent, to care for those in need."

Sessions: "Well, thank you for those remarks and attack but I would just tell you we do our best everyday" pic.twitter.com/NUq5HSZZMg

Cox, on the other hand, was almost immediately apprehended and forcibly removed by his neck. He told The Canary:

They escorted the two cis-male Christian pastors who protested peacefully at the beginning out without laying a finger on them and just pointed to the door as they walked them out. I asked on my way out if I could get my wheelchair and leave. The officer refused and said “one of us will get it” and continued to push me out by the neck. 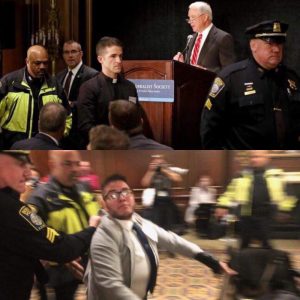 Cox has suffered from fluoroquinolone toxicity since September 2017. The condition is caused by taking certain antibiotics which alter mitochondrial DNA. This can cause tendon ruptures, severe tendinitis, fibromyalgia, rheumatoid arthritis, and even episodes of blindness. So Cox’s tendons, joints and muscles are very weak, making the forceful actions of the police a lot more harmful.

Cox told The Canary he had received ableist criticism from the New Boston Post (which has since been retracted) calling him “the faux handicapped person” following the ordeal. The argument was that he was ‘walking’ during the few steps he took towards Sessions and whilst being dragged out. In response to the criticism, Cox told The Canary:

Being forced to walk by the yank of a neck isn’t walking. Also, that is a form of ableism that wheelchair users often receive. The large majority of wheelchair users are not completely paralysed. There’s countless reasons why someone may use a wheelchair, such as chronic pain, respiratory issues, severe fatigue etc… Me walking a few steps toward Jeff Sessions isn’t the same as me walking around the large room or building independently.

A “painful and unnecessary” response from the police

Cox told The Canary he “wants to make this a teaching moment for law enforcement when it comes to managing citizens with disabilities”, saying that, when “law enforcement sees a person who is visibly physically disabled in a wheelchair, there’s various safe alternative ways you can escort them out, especially if they are being peaceful and compliant”. Stressing that he was “non-violent”, he said his treatment at the hands of the police was “painful and unnecessary”. And he insisted:

I highly encourage law enforcement to have mandatory training for disabilities.

“We need our allies more than ever“

Cox also issued a defiant statement to The Canary, saying:

During these trialing times in our nation and throughout the globe, it is increasingly crucial that we differentiate the definitions of the terms ‘debate’ vs. ‘social justice.’ Social justice is defined as ‘justice in terms of the distribution of wealth, opportunities, and privileges within a society.’ Question 3 on the ballot in the state of Massachusetts and the recent leaked memo that proposes the repeal of transgender Americans having the right to access public spaces free of discrimination and also erasing us entirely as a recognized group is a social justice issue, not a dinner-time debate. Transgender people are not a hot topic, a heated debate, and not a comments section on social media for opinions and devil’s advocacy. It is not an ‘ideology’ or ‘lifestyle’ people can agree or disagree on. When people reduce us to some intellectual exercise as if we are abstract and not your fellow Americans who deserve equal rights, our humanity is being erased.

He stressed in particular the importance of solidarity from the non-trans community:

We need our allies more than ever as the trans community in the United States is under serious distress. Transgender people I personally know and also including myself have had their mental health affected by the anxiety and depression caused by the intensified hate and anti-trans rhetoric and tone in our environments. It’s draining explaining and defending repeatedly why we deserve civil rights.

Faced with attacks on numerous fronts, “I would do it all over again”

Cox also pointed out that it’s not just the trans community that’s under attack in Trump’s America:

I am a Disabled, Jewish, Indigenous, Latino Paraguayan immigrant, autistic, bisexual, transgender man. Many of my identities and communities have been under the attack of the Trump administration…

The increased racism towards Latinx immigrants and antisemitic violence has caused a significant amount of panic as well. I want to sit and pray with the people I love in my synagogue and not wonder if we will be the next shooting, since Pittsburgh’s tragedy has sparked an antisemitic ripple effect targeting Jews across the country.

On Monday in Boston, there was an infuriated Trump supporter who was following me yelling transphobic and homophobic slurs and I had to go into a restaurant to get away from him escalating. Also, just this past Thursday, a white supremacist tried crashing his car into me on the highway. People harass and ask me if I’m a legal citizen since I have a Spanish name and am criticizing Trump’s hostile and repulsive separation of children and families policy. I have been a citizen since 1997…

I’m autistic, in a wheelchair, and have periodic episodes of blindness from my disability too. And I have to worry about how to properly defend myself now that the aggression around election time has especially increased.

Social justice would be building a longer table, not a higher wall. History will not be kind to those advocating to repeal transgender Americans civil rights. We must fight. Even with three sprains, I would do it all over again for the transgender community. We won’t be erased.

Serious questions need to be answered regarding the police’s use of force against Cox. But Boston Police Department didn’t respond to The Canary‘s request for comment.

To stand up for oppressed and marginalised people right in the face of the oppressors takes a serious amount of strength and bravery. And that is so desperately needed in times of such hate and divisiveness. As Cox said:

I put my life on the line for that. I was in a room full of anti-transgender Trump-supporting white cis-men and women. I stood up to Jeff Sessions himself and I was erased. But transgender people will NOT be erased. We will be loud and visible.

Cox is a real inspiration. And his actions have not only helped to amplify the voice of the transgender community, but will have no doubt inspired others to keep the fight going.

– Support The Trevor Project and The Human Rights Campaign.