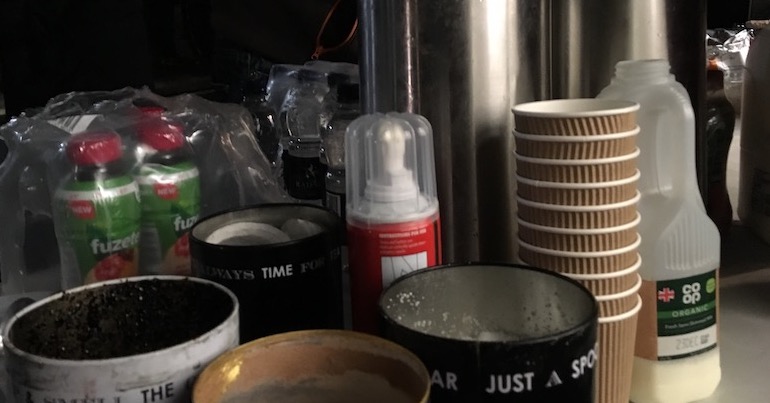 It seems busy at the Penzance Street Food Project in Cornwall. Every night, members of the local community work as a team to feed homeless people. But the team says this is a quiet night. The Canary promised not to use real names or to take photos of people who’ve come here to eat. And rightly so, because earlier this year, the BBC filmed without permission.

“There isn’t any safety in camping”

I live in a tent now. There aren’t many places you can put tents. I’m lucky… I found a little quiet corner somewhere. There aren’t any dog walkers or anyone bothering me.

James is incredibly matter-of-fact when he explains that, despite feeling lucky, he’s far from safe. “Anyone can bother me,” he says, “there isn’t any safety in camping.” Winter in a tent, he says, “is pretty miserable”, but “you just have to accept it for what it is”. James comes to the Street Food Project every night:

It’s amazing. The generosity of people here, and the outpouring of hope, is very telling.

James trusts that someday soon he’ll get rehoused and have his own flat. He’s not sure when that may be. At the moment, he gets Employment and Support Allowance (ESA); “but not for long,” he says, because “that’s going to dry up soon.” ESA is one of the six benefits that Universal Credit replaces.

His perception about the reality of life for too many people living under austerity in 2018, meanwhile, is crystal clear.

“The gangsters are running the show”

James sees a clear explanation. “You can trace it all the way back to Thatcherism,” he explains:

They knew exactly what they were doing when they did it. It’s all by design, isn’t it – the way the population is suffering at the moment? It’s just what the establishment want for our population.

There’s “not really” any sign of things changing as far as James can see. “Especially with this whole Brexit scam,” he continues:

They can now justify anything on the back of ‘it’s not our fault – we did our best’. It’s the biggest scam since the last one, which was the financial crisis. It’s still being called the financial crisis when it was the biggest financial scam the world’s ever seen. We’re being lied to left right and centre. And because so many people don’t want to rock the boat, or are afraid of losing what they’ve got, no one’s questioning it loudly enough. No one in politics is going to change the deal. They’re a nasty bunch. The gangsters are running the show.

As far as James is concerned, “we’re all made to suffer because the rich folk don’t want to share”.

“I think it’s only going to get worse”

James says that he “hasn’t done Christmas for a few years”. He feels that “family and kids are Christmas”; and as he explains, “I’m a single man living on the streets”.

The Street Food Project is serving Christmas meals. “I’ll head up there,” he says, “and that will be my Christmas, as such.”

More than himself, James seems to worry about other people; because he knows “so many people” who are really “struggling just to keep the council accommodation they do have”. He knows people who work but “the price of rents isn’t the same” as the earnings “or top-ups they can get” from Universal Credit. From where he stands, he “can’t see anything changing”. In fact, he says, “I think it’s only going to get worse”. He warns that:

Anyone could find themselves on the street. That’s the reality. The system is geared to put you on the street. And when you’re there, it’s not designed for helping you out.

James finishes his cup of tea and heads back out into the night.