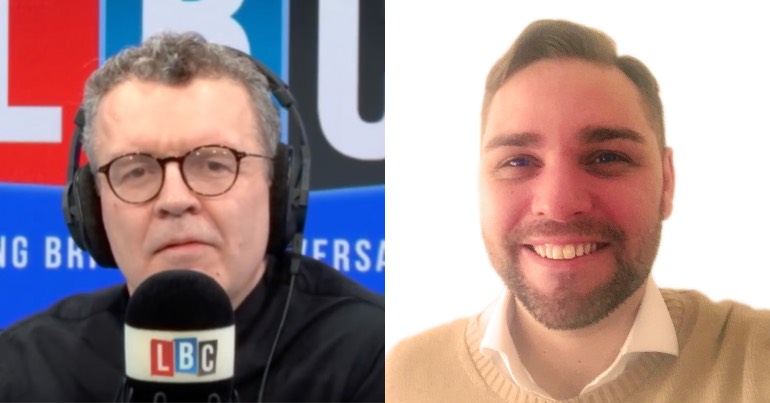 As The Canary covered previously, on 1 March, Labour deputy leader Tom Watson was confronted over his alleged anti-Corbyn sabotage live on LBC.

Now The Canary talks exclusively to ‘Lee from Swindon’. He explains what motivated him to act and what it felt like to take on the deputy leader of the Labour Party.

There is growing anger among many Labour members at Tom Watson’s conduct. Despite being deputy leader, Watson has talked down the Labour Party in media appearances. And if this Twitter poll by Evolve Politics is anything to go by, many want rid of Watson and a new deputy leader elected.

There is now a huge row brewing between Jeremy Corbyn and the Labour Deputy Leader Tom Watson over Watson's claims that there is a 'widespread culture of bullying' within the party.

Do you still support Tom Watson, or would you like a new contest for the Deputy Leadership?

So it’s unsurprising that Lee’s challenge was well received. He spoke for many frustrated Labour supporters who don’t have media opportunities to hold Watson and his colleagues to account.

So, last night I managed to get onto @LBC and tell @tom_watson exactly how hundreds of thousands of @UKLabour members feel, and millions of voters around the country

You can watch Lee’s full confrontation with Watson below:

You are the deputy; you should be bringing people together. But all the time you and your little tribe are jumping up on all these TV stations destroying the Labour party, destroying the movement that’s happening at the moment.

You are, right now, sitting… on a revolution that could transform this country for the better. And people like yourself, all you do is spend your time killing the Labour Party from within. How dare you

There’s 500,000 people that signed up to the Labour party to support it in the movement that’s happening at the moment. And people like yourself, all you can focus on is this antisemitism issue. When you know that the percentage of people in the Labour party that are antisemitic is absolutely minuscule. Why are you not focusing that anger towards the Tory party? Why is it always inward? You come on this LBC show today acting as if this [Chris Grayling] is your main priority. But actually, all the time you’re there in the background trying to destroy the Labour party. How dare you!

This was a brave thing to do in the current climate where many people are fearful of speaking out.

The Canary talks to Lee

Lee describes himself as a “Labour Party voter” and says he’ll be becoming a member soon. Asked what provoked him to phone in and challenge Watson, he told The Canary:

We owe a duty to ourselves, society, and future generations to fight and win this battle. Never before has an opportunity to realign economic, social and wealth inequality been so close. I have been shouting at the TV and radio for the past year. Today I decided, enough was enough – it’s time to fight back.

Lee said what he thought of the way Watson spoke to him:

Throughout the exchange, he was smirking as if the issues I made weren’t worthy of being taken seriously, if not ridiculed. Insulting not just to me, but the many hundreds of thousands, if not millions of people who share my perspective. He even made a comment about the place I live, saying “…however angry you want to be ringing in here, being a big big voice from Swindon…”, which I take offence to. Sorry Tom, do people from Swindon not deserve the same voice as people from London, West Brom [Watson’s constituency, West Bromwich] or Sheffield? Quite uncivilised and demeaning.

Lee then spoke of his concerns regarding Watson’s approach to issues of racism:

The key point I was making to him centred around the fact he makes no attempt to call out the scourge of Islamophobia, antisemitism and racism in the Tory party, whilst perpetually campaigning and demonising the Labour movement for apparently being institutionally racist. I wanted to know why he doesn’t attack the Tories with the same energy as he does his own party. It was telling that legions of the Tory faithful were calling in to offer their support to him.

So what does Lee think Watson’s real agenda is?

Tom Watson is a threat to Labour and the socialist movement. He is killing the Labour Party from within.

And he said Watson:

Tom is diametrically opposite to current Labour values. For example, he has consistently voted in support of war (Iraq, Afghanistan, Syria), opposed investigations into Iraq, and supports nuclear weapons. I believe Tom Watson’s agenda is a relic of New Labour / Tory Lite, and therefore will do anything to see those archaic, neoliberal values perpetuated.

Lee also found one of Watson’s questions during the radio show concerning:

I noticed in the phone in, he asked the question ‘will the TIG group be a positive force for change in British Politics?’ I was thinking, hang on a minute, the TIG group are Labour’s political opponents! You sound like a TIG supporter with a loaded question like that!

Watson is also a supporter of Labour Friends of Israel. The group was criticised in 2018 for a now-deleted tweet, which seemed to excuse the massacre of Palestinian protesters. And Lee questions whether Watson is concerned with Palestinian rights:

Tom does not want to talk about human rights abuses in Palestine (such as UN Human Rights Watchdog this week stating Israel has likely committed war crimes by shooting unarmed journalists, medics and children in Palestine)

Lee also stressed that he has Jewish family members. And he flatly refutes the suggestion that Labour is institutionally antisemitic:

Members of my family are Jewish, one of which survived 3 years in Mauthausen concentration camp. They are huge Labour supporters, who actively campaign and knock on doors, and do not buy into the notion Labour is an institutionally antisemitic party.

Lee is also motivated by political idealism and sees Watson as an obstruction to that:

I cannot stand by any longer and allow people like Tom Watson to destroy the movement that has inspired our nation. I have dreamed of living in a fairer society, where poverty is genuinely eradicated, social / cultural capital is celebrated to its fullest, and we work to live, not live to work. It was an idealistic dream that I felt could never become a reality, but now that reality is within our grasp.

There’s no way I can stand by… and allow the likes of Tom Watson to destroy everything the hundreds of thousands of Labour members, and millions of voters across the country, have fought for.

With all this in mind, Lee imagines a different type of Labour deputy leader:

The Labour Party deserves a passionate, devoted and committed deputy who will do anything to further the agenda that the 600,000 members want, and our country needs.

We live in a media environment in which Labour Party supporters and members are frequently spoken about negatively, but rarely spoken to. Meanwhile, right-wing Labour MPs are given regular media access and use it to smear Labour members. But during his encounter with Watson, Lee spoke for many who are ignored and are outraged by the conduct of Watson and his colleagues.