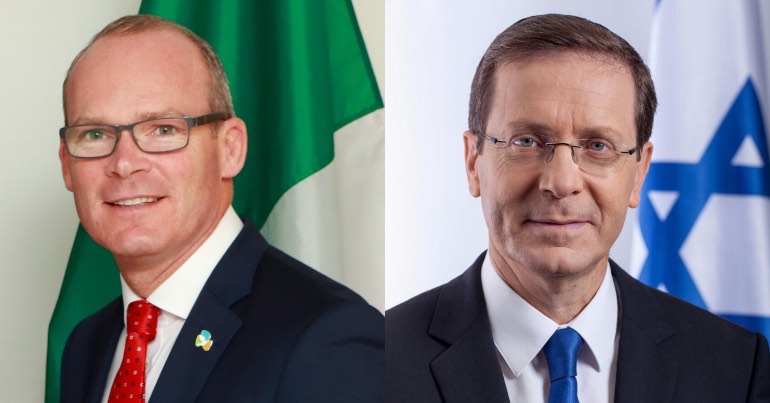 An Israeli agency has written to the Irish government stating its “concern” about an Irish bill that would ban trade with illegal Israeli settlements in the Occupied Palestinian Territories.

Isaac Herzog, chair of the Jewish Agency for Israel (which encourages Jewish people to emigrate to Israel), wrote to Simon Coveney, the Irish minister for foreign affairs and trade, in January. The Canary obtained a copy of the letter via a freedom of information request.

Concerns about the bill

Members of the Irish parliament recently voted in favour of the Occupied Territories bill. The bill would ban trade with illegal Israeli settlements.

Herzog states in the letter that, “as a faithful friend of Ireland”, he wants to discuss his “deep concern” about the bill. He writes:

This proposed legislation, which singles out Israel for penalization of trade, is not only unfair and unjust, but it also sets a dangerous precedent which is detrimental to the relations between our countries.

As a result, he claims, it would undermine:

the chances of resolving the Israel Palestinian conflict by a negotiated compromise.

Herzog also tells Coveney that, if the bill becomes law, “a general boycott of Israeli Irish exchanges would extend itself to all walks of society”. He says this would mean:

most [people] would deduce it’s open season on Israel.

this singling out of Israel would only spread demonization and double standards with respect to my country, but probably, as is all too often the case, with respect to Jews in general.

What’s more, he claims that the bill could inspire people to attack Israel and Jewish people, causing:

a violent turn by extremists who would interpret it as an official encouragement to more hostility, and indeed more hostilities.

Herzog: “We need to join efforts to block this Bill”

He closes his letter by pointing out that he knows Coveney and his government “oppose this Bill”. Even so, he writes:

I am offering my help to try and prevent it. We need to join efforts to block this Bill.

The Ireland Palestine Solidarity Campaign (IPSC) spoke to The Canary about the letter. It called it an attempt “to interfere in Irish democratic processes [that] is simply outrageous”. The suggestion that the government and Herzog “join efforts” to block the bill is “sinister”, it said. And this:

should be of concern to everyone who believes Ireland should be supporting international law and standing with our Palestinian brothers and sisters in their struggle against Israel’s racist and apartheid policies.

The idea that the bill would encourage increased hostility towards Jewish people, the IPSC said, was “abhorrent scaremongering of the worst kind”. And it went on to say it:

hope[s] the Irish government rejects undertaking any joint efforts with either the Israeli government-linked Jewish Agency or its deeply anti-Palestinian chairman Isaac Herzog, and instead ask it to listen to the democratic will of the Oireachtas [legislature] by supporting the passage of the Occupied Territories Bill, which will ensure Ireland complies with its obligations under international law.

Other concerns from Israel

An Israeli thinktank has also expressed its concerns about the bill. The Institute for National Security Studies (INSS) said the bill:

reflects the illegitimacy many international actors attribute to the settlements and their willingness to take concrete action against them.

Alongside Chile, it says, Ireland has “long been a platform for global anti-Israeli activity”. And although it admits that Israeli trade with Ireland is negligible, it claims the bill:

might motivate anti-Israel organizations and activists to promote similar campaigns in other countries and forums, some of which might be more important to Israel and could also lead to the adoption of more severe decisions.

As a result, it argues that:

In Ireland, discussions should ensure that the government is indeed against the proposal and that it is committed to take action to remove or significantly stall the legal proceedings, to soften its wording, or to avoid its implementation.

The INSS also describes the IPSC as “one of the most prominent Israeli delegitimization organizations in the international arena”.

When the IPSC spoke to The Canary, it said the INSS article:

shows that the Israeli establishment continue to fear the Palestinian-led BDS Movement and its global campaign to apply pressure on the apartheid state to grant Palestinians’ their inalienable rights.

Proof that BDS is working?

The bill is unlikely to become law because of the Irish government’s ability to block it. But in spite of this, Israel still seems to be worried about it. And the letter from Herzog is evidence of this. This, meanwhile, is on top of pressure that US politicians have already placed on the Irish government.

This level of pressure suggests that Israel does not want any country to support basic Palestinian rights. And it reveals just how scared the state is of the ongoing achievements of the Boycott, Divestment, Sanctions (BDS) campaign.