Barry Gardiner tells The Canary we can 'do this together' to protect the planet, create jobs and fix the economy - The Canary 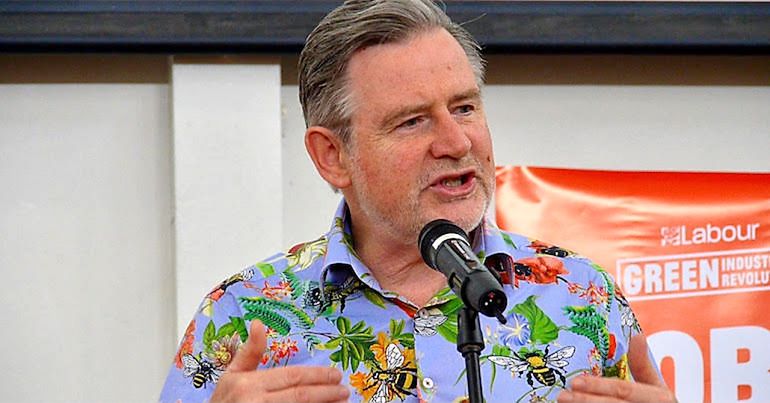 On 22 June, shadow ministers Barry Gardiner and Rebecca Long-Bailey spoke at a community event in Cornwall. They were there to launch Labour’s Green Industrial Revolution. This is a radical but vital plan to protect the environment. It’s also community-based to create local jobs and transform the UK economy. Gardiner spoke to The Canary and discussed these plans in more detail.

“We all own the water and the air”

Gardiner pointed out the ludicrous situation in the UK when it comes to public ownership of key utility companies. As Long-Bailey explained, Labour’s Green Industrial Revolution proposes a radical “new form of democratic ownership”. But in some ways, this new model isn’t as radical as it may seem. “I think,” Gardiner said, “it’s important to remind people that most of our utilities are owned by nationalised companies”. But, what’s significant, he explained:

It’s just they’re not British nationalised companies, they’re French or German nationally owned companies. And that makes you think, well why is it our utility bill payer and our citizens [that] are subsidising their national industries?

As he explained, elsewhere in Europe, “it’s against the law for anyone to try to own the water industry”. Many countries support public ownership of public utilities. He said Labour’s model is “the best way” because:

We all own the water and the air.

“We have to do this together”

In October 2018, the UN Intergovernmental Panel on Climate Change (IPCC) released a devastating climate report. It concluded that global warming must be kept to 1.5°C to limit the most severe effects of climate chaos. Reducing emissions to zero by 2050 is crucial to meet this target. Gardiner said, “the easiest way to achieve” this is “to close down all manufacturing industry, to stop people from driving and to stop doing anything that is causing emissions”. But he explained that wouldn’t create a sustainable economy, yet in part, this is what the current government is doing:

So the more the Tories can push this country into a recession, the more manufacturing industry they close down, the more they’re able to claim ‘look how much we’ve reduced our emissions!’. But that’s not a path to sustainable success. And that’s why we’ve put together the Green Industrial Revolution because it’s saying, look, we have to achieve the emissions reductions along with the economic growth – we have to do this together.

By some idiotic no-deal Brexit that is going to decimate industry, decimate manufacturing. We’ve got to do it in a way that is creating [not only] new jobs but the jobs… for tomorrow: renewables jobs, the sustainable future.

He outlined the way that Labour’s Green Industrial Revolution is completely tied in with rebuilding the economy and creating “high-quality jobs”. Changing the “structures of the grid” means greater engagement at local and community level to transform existing hierarchies. He continued:

And that’s why Labour’s looking at this not from some hair-shirt perspective but absolutely from the perspective of a clean industrial future where there’s really good wages, really good jobs, and a very strong economy.

Gardiner echoed Long-Bailey in presenting a model to challenge the power of fossil fuel multinationals. He explained that there are a growing number of people, including “Mark Carney, governor of the bank of England” who are examining not only “climate-related risks” but the associated “financial risks”. This comes, he said, from “using the shareholder clout you have now”. He explained:

It’s not simply ‘oh we’ve got to take all money out of fossil fuels’ because if you do that, you lose jobs, people’s pension funds collapse. What we need to do is… transition the economy.

Gardiner outlined a “transition pathway” that some pension funds, such as the environment agency, have already taken. This is built around “activist shareholders” who force “greater transparency” about the risks of investing in fossil fuel-based companies. Given the urgency of the current climate crisis, those companies are set to have “stranded assets in the future”. Once investors start to recognise that they won’t “get a return on investment” in the shift away from fossil fuels, the current power of those companies shrinks.

Donald Trump “is not a reliable partner in international negotiations”

The Canary asked Gardiner about the environmental risk posed by Donald Trump’s administration – not least since Trump stated he’d withdraw from the Paris Agreement. Gardiner laughed and said:

Trump pulls out of all sorts of treaties. NAFTA [the North American Free Trade Agreement], the Iranian nuclear treaty. He is not a reliable partner in international negotiations – I think that’s very clear.

But Gardiner explained that, having spoken with “Obama’s climate adviser” in 2016, he feels Trump’s power isn’t quite what it seems. The adviser warned that “the federal programme will go and he may well pull us out of the COP”. Conference of the Parties (COP) is the UN’s annual climate change conference. It’s an intergovernmental body that meets every year to set and assess targets on climate action. The Paris Agreement came from COP21, and so “of course” Trump’s now trying to leave COP. But Obama’s adviser told Gardiner that “actually business in the US understands” the threat of climate breakdown and “that this is the future”. He continued:

Action at local level is vital, and this is one of the key drivers behind the Green Industrial Revolution. As Gardiner noted, Trump’s actions could lead other countries to ask why they should:

Ratchet up… emissions reductions when America, one of the biggest polluters in the world, won’t.

He agreed that how this “plays into the international negotiations” is “really significant”. But he explained that non-federal action against climate chaos shouldn’t be underestimated. Gardiner thinks that the US “will make… progress” but that it “won’t make it quite as fast, because the federal programme has gone”.

Globally, the US is still the “second largest emitter of greenhouse gases”. But with US progressives working for the Green New Deal, and Labour’s Green Industrial Revolution, new community-based models for taking action despite inept world leaders are taking hold.

On 20 June, Campaigners won a landmark legal challenge against the UK government. In a historic judgment, the Court of Appeal ruled that the government “must now stop issuing new arms exports licences” to Saudi Arabia. The government stood accused of “serious, ongoing violations of international law by Saudi Arabia”. Because those arms were used in its ongoing war on Yemen.

As shadow international trade secretary, Gardiner responded to Liam Fox on 20 June. He clarified his position further to The Canary and said that the UK is “supposed to be the guardian for the world of humanitarian law”. He continued:

It’s appalling that the courts have ruled that our system was so flawed – actually illogical as they called it – that we could have arrived [at] a decision that we knew to be incorrect. And if you can’t arrive at a decision that you know to be correct then there has to be a reasonable risk of breaching international humanitarian law.

And that means that we should not have sold the arms. It’s as simple as that. Follow the logic.

With this line of argument and such clear commitment to environmental and economic change, the difference between Labour and the sitting government couldn’t be more stark.