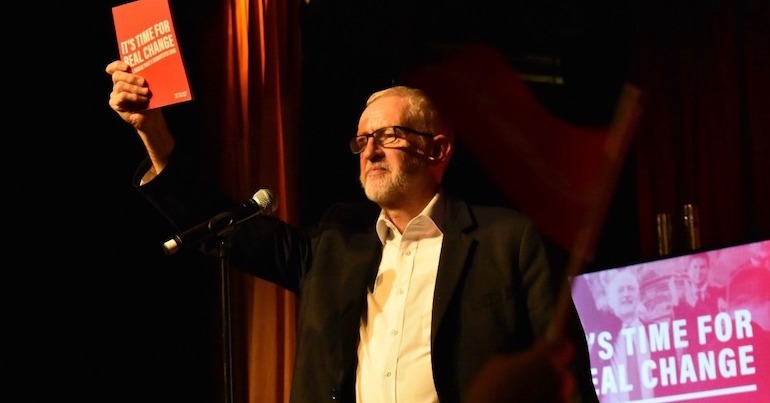 With only 48 hours to go until the general election, the Progressive Democrats of America (PDA) issued a powerful statement in support of Jeremy Corbyn and the Labour Party. The PDA’s Alan Minsky sent this letter to The Canary and it’s a powerful and important show of solidarity.

The Canary is sharing the letter in full:

“A clear pathway to a more just and equitable society”

“On Thursday, the British public has a historic opportunity to elect a truly pro-worker, pro-environment, anti-war and anti-racist government by voting for Jeremy Corbyn’s Labour Party in the UK general election.

“A Labour victory would represent a sharp break with neoliberalism, the failed economic orthodoxy of the past four decades, which makes an idol of the “market” and re-distributes wealth and power ever-upward.

“The neoliberal project was launched by Margaret Thatcher in 1979, and Ronald Reagan a year later. The record is clear: neoliberal economic policies deliver society’s wealth into the hands of the few, condemns the rest of us to lives of struggle and debt peonage, rips apart worker’s rights, maintains structural racism and permanent wars, and generates ever-greater environmental degradation.

“The Labour Party Manifesto, in brilliant contrast, lays out a clear pathway to a more just and equitable society. It calls for the revival of tried and trusted policies that produced the most prosperous societies in human history in the Post-World War II era. At its heart, the Labour program is about redistributing wealth, empowering workers, and allocating resources to social necessities (health, education, housing, and green energy infrastructure) that the market won’t fund. The plan creates jobs and puts money into the pockets of people who need it and will spend it, generating further wealth. Don’t believe anyone that says it isn’t possible.”

“Contempt for the constitution and democratic principle”

“The choice that British voters face on Thursday is stark.  We in the United States know first hand the results of the neo-liberal austerity that the Conservatives will continue. We have lived under that regime for decades and the situation in the United States is dire. Poverty and homelessness are rampant. Housing and healthcare unaffordable. Debt loads are soaring. It’s almost impossible to make ends meet with a basic job. The once vast middle class is evaporating. All wealth goes to the already wealthy. Democracy is in serious peril.

“Opposing Labour is a Tory Party led by the UK’s Trump, Boris Johnson; a man as self-serving as the U.S. President, with equal contempt for the constitution and democratic principle. Johnson will join the growing ranks of ethno-nationalist autocratic rulers: Erdogan, Modi, Bolsonaro, Putin, Orban et al. Have no illusions, a Johnson victory will be seen as the greatest triumph yet for global Trumpism.”

“A new era of economic prosperity and justice for all”

“How does Brexit figure into this? It’s simple: would you rather have a relationship with Europe designed to favor the interests of international finance Capital and the wealthy (as put together by Johnson); or one that foregrounds the concerns of average people and workers, as Corbyn would pursue? Even better, Corbyn would allow a final public vote on the deal he negotiates.

“There is a cacophony of noise being raised against Labour and its leader by the elite and their courtiers. There is a reason for this. They know that a Corbyn victory means the end of the reign of high finance, the end of the Oligarchy.

“The neo-liberal era began in the UK forty years ago. On Thursday, British voters can launch a new era of economic prosperity and justice for all. In an uncanny act of historical symmetry, we in the US can join with you next year.

“A Labour victory will be a beacon for the world.”