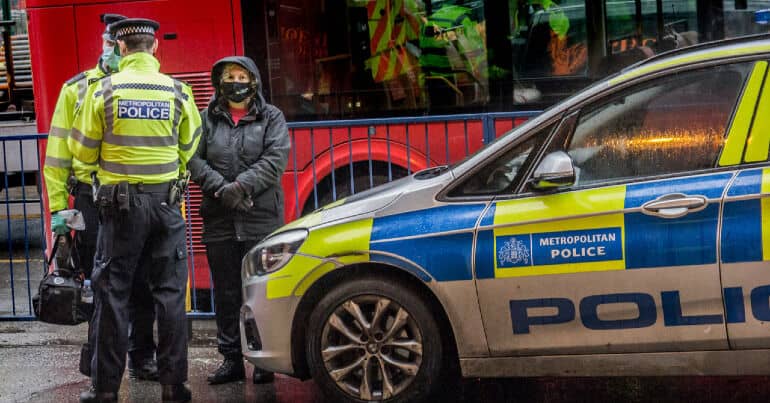 The UK government likes to brag about how we live in a democratic nation that “supports human rights, democracy and good governance around the world”. But its support for democracy doesn’t seem to stretch to upholding the rights of journalists.

In the past week, two journalists were arrested trying to go about their jobs, reporting on protests in different parts of the country.

Meanwhile, the UK continues to score badly in rankings for World Press Freedom. At 35th in the world, it lags behind much of Europe. And in September 2020, The Council of Europe issued a Level 2 “media freedom alert” after the government blacklisted journalists from Declassified UK.

Taken together, this paints a grim picture of press freedom in the UK. And it’s one that should worry us all.

Threatened with a Covid fine & then arrested

Denise Laura Baker was arrested on Saturday 30 January as she attempted to cover the police evicting anti-HS2 activists from their protest tower in Euston.

Baker is an accredited photo and video journalist who has been making a long-term documentary about the resistance to HS2’s high speed railway line. Police and National Eviction Team bailiffs began to evict activists on Wednesday 27 January, and Baker had been there daily documenting it.

She told The Canary that there were lots of police on the Saturday of her arrest. In Baker’s opinion, the police were trying to remove anyone that could witness and document the actions of police and bailiffs. Baker said:

I was approached by a female officer who told me to leave the area. I informed her that I was working legitimately and showed her my NUJ press card. She told me that it was not a recognised card and that it did not prove I was working. I informed her that I had been there since Wednesday with no issues. She called over colleagues who said they were going to issue me with a Covid fine. When asked for my details I refused and explained that in accepting the fine I would legitimise their accusation of me being unlawfully in the area and give them free rein to keep moving me on. I then walked away from them and continued working.

They followed me, insisting that they were issuing a fine and if I didn’t give my details they would arrest me, which is eventually what they did. They then cuffed me, put me in the police car and took me to Kentish Town station.

It is my belief that they simply wanted me out of the way so there were less witnesses to their work on that day.

Journalists are classed as key workers in the coronavirus pandemic and Baker should, legally, have been allowed to carry on doing her job.

The second arrest of the week

But Baker wasn’t the first journalist finding herself in police cells last week. Freelance photographer Andy Aitchison was arrested on Thursday 28 January. The police came to his house more than six hours after he photographed a protest at Kent’s Napier Barracks, where hundreds of asylum seekers are currently being imprisoned. The police seized Aitchison’s mobile phone, as well as the memory card from his camera, and arrested him under suspicion of causing criminal damage.

Mine is the second recent incident where a reporter has been arrested while working. It’s extremely concerning that if a photographer or journalist appears to be on good terms with the activists, they are at risk of being targeted. These actions set a dangerous precedent.

Aitchison’s case is particularly concerning given the seizure of his phone and memory card. Journalists not only do not have to reveal their sources, but they are also obligated to protect them. As the NUJ states:

The NUJ ethical code of conduct stipulates that a journalist must protect the identity of sources who supply information in confidence and material gathered in the course of her or his work.

Normally if the police want to view a journalist’s footage for evidential purposes, they have to do it through the courts. In 2012, media organisations won a High Court battle against the police who wanted their footage of the eviction of Dale Farm. On winning the case, head of newsgathering at the BBC stated:

Journalists must maintain their independence, must not be seen as evidence gatherers and must not have their safety compromised.

Unfortunately, these are not isolated incidents.

In 2019, The Canary reported how the Metropolitan Police arrested freelance journalist Guy Smallman while covering an environmental protest. And in September 2019, journalists from The Canary were obstructed and assaulted while covering protests against the London arms fair.

At the end of 2020, the National Union of Journalists reminded the police to respect journalists’ roles as key workers after “hostility towards reporters and photographers” who were covering anti-lockdown protests.

The Canary contacted the Metropolitan Police for comment on Baker’s case. But it had not responded to the specific case at the time of publication and instead referred us to the guidance from National Police Chief’s Council.

UK press freedom is a “cause for concern”

Reporters Without Borders releases an annual World Press Freedom Index. It highlights that while the UK “champions” media freedom, the reality is different for reporters on the ground. The organisation argues that:

Despite the UK co-hosting a Global Conference for Media Freedom and assuming the role of co-chair of the new Media Freedom Coalition, the UK’s domestic press freedom record remained cause for concern throughout 2019.

And it pointed out that:

During the general election campaign, the Conservative Party threatened to review the BBC’s licence fee and Channel 4’s public service broadcasting licence if the party returned to government.

Reporters Without Borders has also highlighted how the current government has done its best to shut down the dissenting voices of what it calls “campaigning” media. In particular, it argues that government bodies have used:

heavy-handed responses to reporting on stories related to the Covid-19 pandemic.

We are alarmed by the UK government’s dismissal of serious public interest reporting as ‘false’ and coming from ‘campaigning newspapers’. These Trumpian tactics are only serving to fuel hostility and public distrust in media.

While high-profile cases like that of Julian Assange fill newspaper headlines, many lesser-known journalists, whose work is absolutely vital in holding the government and corporations like HS2 to account, are also facing persecution. We should all be horrified at these attacks on press freedom.