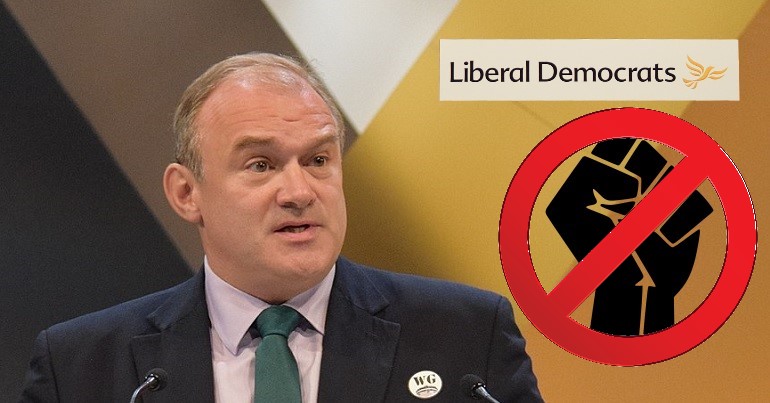 The Lib Dem leader Ed Davey is at the centre of a growing storm. It involves a councillor for his party accused of racially abusing a child. Residents of the Lib Dem-led council have accused it of ‘covering up‘ its investigation into the incident. And so far, the councillor in question, who works alongside Davey’s wife in his own constituency, has kept her job and party membership.

Meanwhile, a Lib Dem spokesperson told The Canary that the case is subject to an “internal investigation”. However, residents said that the party had not responded to them and they were not aware this investigation was taking place.

But what’s not in question is the racist abuse. Because an independent investigation by the ombudsman found that the councillor “did not dispute” the alleged racism.

Lesley Heap is a Lib Dem councillor. She sits on Beverley Ward in Kingston upon Thames. In 2019, she also taught swimming at a local leisure centre. It was there that the incident in question took place.

Reports emerged on Monday that Liberal Democrat Councillor Lesley Heap was suspended from her job as a swimming teacher at the Malden Centre after a parent made a formal complaint that she verbally and physically abused a child whilst in her care.

Former Kingston deputy mayor and Kingston Independent Group (KIG) affiliate Mary Clark announced… that she wrote to the Kingston Council demanding Councillor Heap is also suspended from her role as councillor while the investigation is ongoing.

It also noted that at the time Heap was:

council ‘mental health champion’ for housing and a member of the reserve committee dealing with child safeguarding issues.

The verbal abuse was racist in nature. Mrs B [the mother] alleged the physical abuse was as follows:

the swimming teacher [Heap] had pressed her fingers into both sides of her daughter to straighten her legs.

She provided the leisure centre with a photo of the resulting scratch. So far, no one has made public the exact details of the racist abuse.

Places Leisure, the company that ran the leisure centre launched an investigation. But at the time, the council did not act. The Surrey Comet reported that it ‘dismissed’ people’s calls for it to investigate. It cited a ‘lack of evidence’ as the reason. But from here onward, the situation escalated.

The company held an investigation into the incident. The result of this did not uphold Mrs B’s allegation of physical abuse. But Places Leisure also refused to let her see the results of its investigation. It cited ‘data protection concerns’. So, Mrs B complained to the council.

It effectively did nothing. The council said what the leisure centre did: that it couldn’t show her the investigation. It too claimed this was because of data protection. So, Mrs B then went to the Local Government and Social Care Ombudsman. It’s an independent body that looks into complaints against councils. It investigated the situation. And it found multiple faults with both the leisure centre and council’s conduct.

The ombudsman found that overall:

Specifically, it noted that faults occurred because:

But the ombudsman’s report contained two other major concerns.

The start of a cover up?

Firstly, it said that both the leisure centre and council were at fault for not telling Mrs B the outcome of the investigation. It wrote that:

Mrs B had raised a serious concern about safeguarding issues relating to her daughter. She therefore had a reasonable expectation both the leisure centre and Council would tell her the outcome of its investigation. I see no reason the Council could not have done that without breaching data protection regulations.

Failure to tell Mrs B the outcome of the investigation, even if it had to be in vague terms, is fault. It is unsurprising in those circumstances Mrs B does not believe the Council and leisure centre have dealt with her concerns properly and is not reassured they have followed the correct procedure.

But moreover, one section in the ombudsman’s report raises serious issues. These are not only with the council but also the Lib Dems.

The leisure centre manager finished the investigation on 3 June. I do not have a formal record of the decision but other documentary evidence suggests the manager decided the evidence on physical harm was inconclusive. Based on the fact staff at the centre have received antiracist/equalities training I have taken it the second part of the complaint about what the swimming teacher said to Mrs B’s daughter was upheld, given the swimming teacher did not dispute it.

In other words, Heap did not deny that she was racist towards the child in question. It’s this which has now brought the incident back to the spotlight.

The Kingston Independent Residents’ Group (KIRG) has got involved. It said in a statement that it’s:

calling for Councillor Heap to come clean and admit any involvement and… to resign. They are also writing to Liberal Democrat Leader, Sir Edward Davey, calling on him to take action and for the Lib Dem group to undergo training in issues of equalities and diversity if, as it would seem almost certain, one of their number was involved in racial abuse.

In a statement seen by The Canary, KIRG said the council and leisure centre had:

covered up the results of the investigation and did not reveal the results to the mother.

It’s contacted Davey twice via email. The emails were sent to two of his email addresses. KIRG sent the first email on Monday 8 February. It sent the second on Tuesday 9 February. And so far, he has not responded to either. The Canary has copies of the emails. Due to the sender’s tracking app, you can see that the emails have been read by someone with access to Davey’s emails. Someone has read the first email 13 times; the second six times.

If the Liberal Democrats have been sheltering Cllr Heap for nearly two years their silence would make them complicit in this racist act.

James Giles from KIRG also has serious concerns. He said in a statement:

Davey made great noise last year in the wake of the tragic killing of George Floyd to stamp out racism in British society. The fact that he has failed to address this serious issue in his own constituency is of very grave concern indeed. He must now take immediate action, if indeed he is serious about tackling the cancer of racism in his party.

I am utterly shocked at the behaviour of this councillor and the council. The council said two years ago that there was nothing to see. Now we find out from the Ombudsman that Cllr Heap admitted racially abusing the child, that the council failed to record evidence properly and when they did review the evidence they attempted to sweep it under the carpet. Anyone who admits racial abuse would be disciplined at work – and it should be no different for elected representatives. She must now resign.

What do the council, the leisure centre, the Lib Dems, and Heap say?

We asked the council for a response to allegations that it covered up its investigation. We also asked it why Heap has not faced action in her role as a councillor (the investigation was based around her role in leisure). It acknowledged our request, but had not provided answers or a response at the time of publication.

We asked the Lib Dems if Davey is aware of the incident and subsequent communication from the residents group; why Heap has not faced disciplinary action from the party, and also its response to allegations of a cover up. A Lib Dem spokesperson told The Canary:

Both Ed Davey and the local party take these allegations extremely seriously. An internal party process is still ongoing and until it is fully concluded it is not possible to comment any further.

We also asked Places Leisure for a response into allegations that it covered up its investigation, and the criticism into the leisure centre’s handling of the situation made by the ombudsman. It had not responded at the time of publication.

The Canary asked Heap for comment regarding the incident and her conduct; whether or not she considers it appropriate that she has kept her position as a councillor, and also as a member of the Lib Dems. She had not responded at the time of publication.

The ombudsman’s report was released a year ago, in February 2020. The original incident took place in April 2019. So if, as the Lib Dem’s claim, the investigation is “still ongoing”, there are serious questions over what KIRG referred to as ‘complicity in inaction’. Meanwhile, the fact that local people’s complaints haven’t been answered by the party and its internal investigation not revealed to them before this article, gives weight to their belief that it looks very much like a ‘cover up’.

The Lib Dems and Kingston council should now act swiftly. Both need to provide full disclosure over the incident. And if Heap is guilty, both need to address her continuing roles in their respective organisations.