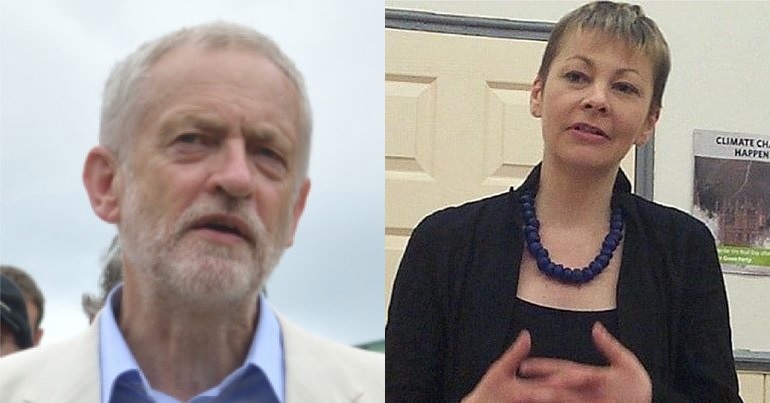 Labour Party leader Jeremy Corbyn and Green Party co-leader Caroline Lucas have backed a photographic book about people whose lives have been hit hard by austerity.

Corbyn and Lucas show their support

In a statement seen by The Canary, Corbyn and Lucas praised Invisible Britain: Portraits – which will share the stories of people who have suffered significantly as a result of austerity, deindustrialisation and cuts to public services.

One of the most shameful legacies of this Government will be the way in which it gave rise to a nasty culture of stigmatising working class communities and looking down on those just struggling to survive, who could be any one of us in different circumstances. These stereotypes don’t just demonise some of Britain’s most deprived communities, they are actively used to justify and excuse the damaging policies that are making people’s lives worse. This book powerfully gives voice to the experiences and perspectives of people who we are used to seeing marginalised and silenced.

This collection of photographs will capture both the struggle and survival of the people across the country who have been hit hardest by austerity. In an era when the media frequently fails to show the impacts of government policy, this kind of book is particularly important.

In 2015, filmmaker Paul Sng co-directed a documentary called Sleaford Mods – Invisible Britain. The film visited broken down, neglected, and boarded up parts of England in the run-up to the 2015 general election. As Sng explains:

what we were seeing wasn’t ‘Broken Britain’, but rather the frontline of nationwide resistance to the breakdown of the places they live.

Now, Sng is editing Invisible Britain: Portraits. This photography book will share 40 untold stories and portraits of marginalised people across the UK. These people feel that the media misrepresents them and that politicians fail to represent them. So the aim of the book, says Sng, is to allow them to “tell their stories in their own voices”.

Some images from the book

The book is currently fundraising to meet production costs. And people who donate can receive rewards like copies of the book and limited edition prints, depending on their contribution.

But Invisible Britain: Portraits is just the beginning.

The plan is also for the book’s sales receipts to be “the first step towards creating a platform that will showcase a diverse range of creative projects by individuals and communities”, which would include “workshops on the creative arts, a mentorship scheme and practical support and advice regarding creative opportunities”.

The British Journal of Photography‘s Colin Pantall has described how Invisible Britain will put “social justice to the forefront by directly confronting the cruelties of Austerity Rule and putting the forgotten people of Britain at its heart”. And the book will indeed be a valuable tool for citizens and politicians alike to understand Britain’s marginalised communities better.

With that increased understanding, we could be witnessing the start of a new, more inclusive form of politics.

– See The Canary‘s report on Dispossession: The Great Social Housing Swindle; a 2017 documentary from Paul Sng about the political failures that have led to Britain’s chronic shortage of social housing. Also see our original report on Sleaford Mods – Invisible Britain.