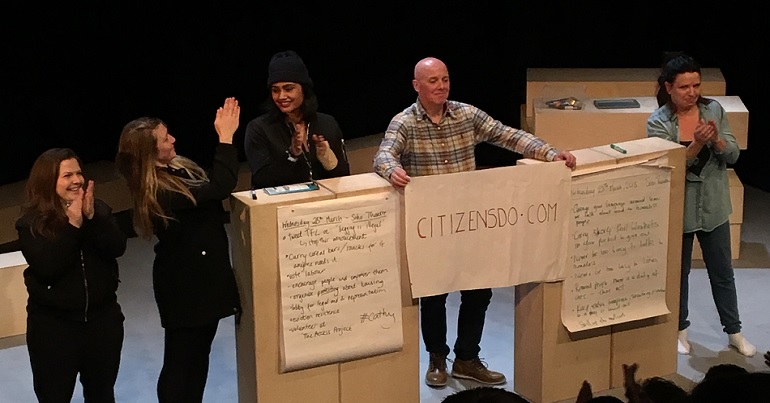 An award-winning theatre company has launched a new movement to help end homelessness and rough sleeping. Its message is a straightforward one: it wants citizens to ‘do’ something.

As The Canary previously reported, theatre company Cardboard Citizens has toured the UK with its production of Cathy; a play inspired by the critically acclaimed Ken Loach film Cathy Come Home.

After every performance the cast discussed the issues raised in the play with audience members. They asked them for suggestions on how to empower the public to make a difference and tackle homelessness. Now, the results have been collated and the campaign ‘Citizens Do‘ has been launched.

The idea is straightforward. People who want to help make a difference to homelessness and rough sleeping sign up to the Citizens Do project. Then, on a weekly basis, people receive an ‘action’ or ‘mission’ to complete, to try and make a difference in their local communities. They range from speaking to acquaintances about homelessness to try and end the stigma surrounding it, to offering a spare room to a rough sleeper.

We must act on homelessness

The actions in Citizens Do do vary from the personal, to the practical to the more political… But it is also about removing the stigma and humanising the issue of homelessness. Part of what we do… is about challenging prejudices attached to homelessness – homeless people are people just like you and I, and it could very easily be you or I having that experience. The more people understand that, the more they will empathise, and the greater the appetite for change.

Change can’t come quick enough, because the figures on homelessness and rough sleeping speak for themselves.

Art as a force for good

But while the figures are devastating, there has been a resurgence in direct action of late; not least in the arts. From photographers and artists to rappers and poets, art is increasingly being used as a force for political and social change. This is something Chandler welcomes:

There’s a lot of interesting work being developed across the arts, and a lot more talk… about arts being used for social change. We’ve been exploring and evidencing our own role in that – from personal and community level change… to systemic and political change…

We’ve also had a lot of conversations over the last few years with artists frustrated, angry, politicised, wanting to do more and say something; as well as campaigners keen to get their messages seen and supported by wider audiences.

Arts, culture and creativity, in the broadest sense, is how we interpret this world… It’s how we connect with each other, how we translate and perceive the world around us – and it therefore has a massive role to play in how attitudes are created and changed. If we reflect on where Cathy and Citizens Do started – 50 years ago, Cathy Come Home was an enormously powerful film that led to the creation of numerous charities and housing associations across the UK. It changed how society broadly understood homelessness…

Be the change you want to see

Citizens Do is a fascinating idea. By moving away from the idea of the bulging third sector charities to more community-led action, we can immediately make an impact. As Chandler said to The Canary:

We as citizens can make personal changes – it’s a cliché, but we should all ‘be the change we want to see’.

We could – and should – be that. And it is needed more than ever.

Featured image via Citizens Do