What happens when hip-hop meets the honeybee? This ingenuity does. - Canary 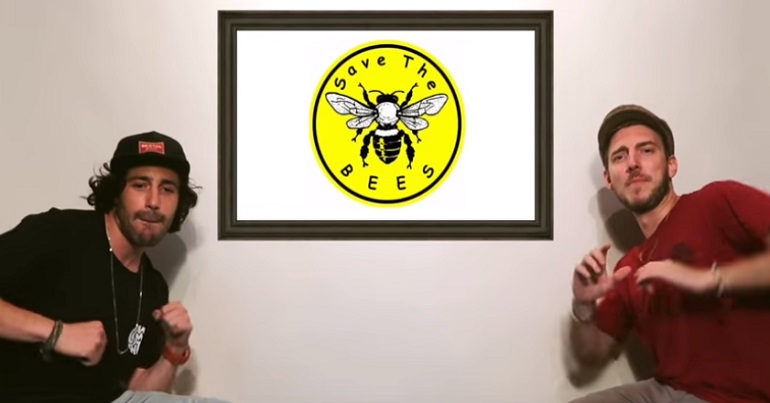 Hip-hop and National Honeybee Day may seem like unusual bedfellows. But a musical duo from south London have released a storming track in support of our buzzing friends; not least because the situation facing these insects is looking increasingly precarious.

Too Many T’s are Leon and Ross, a hip-hop duo from Camberwell, south London. They’re an established act. They’ve had millions of plays across online platforms, toured both the UK and Europe, and opened for global artists such as Snoop Dogg, Public Enemy, Wu Tang Clan, and Grandmaster Flash. Their mixture of humour, self-released material and impressive rhyming skills has drawn the attention of BBC Radio 1, BBC 6Music, and led Huff Post to call them “Britain’s answer to the Beastie Boys”.

Most recently, they released a tongue-in-cheek, grime-led track about beer. But much of their music has political and social messages behind it, with the odd nod to Labour leader Jeremy Corbyn. Now, Too Many T’s have turned their attention to bees. So The Canary caught up with the duo to find out why our buzzing friends caught their eye.

National Honeybee Day, also known as World Honeybee Day, started in the US in 2009. It intends to raise awareness of why honeybees are so crucial to us and the planet. As Greenpeace notes:

Bees and other pollinating insects play an essential role in ecosystems. A third of all our food depends on their pollination. A world without pollinators would be devastating for food production…

Since the late 1990s, beekeepers around the world have observed the mysterious and sudden disappearance of bees, and report unusually high rates of decline in honeybee colonies.

Greenpeace says that industrial agriculture, pesticides, and climate change all play a part in the decline of bees. And it notes that since 2010, a staggering 45% of commercial honeybees have been lost in the UK. It’s this potentially devastating situation which got Too Many T’s attention. So, they’ve released a track in support of the honeybee.

Too Many T’s – getting down with the bees

The duo told The Canary that Not Enough Bees is admittedly a bit of a departure from their last track, Beer Rap. The idea for it came about after a chance meeting at a gig:

Yeah the beer rap was a homage to all the beer brands we could fit in in under two minutes – you got to write about what you know! The bees track idea came from a conversation we had with a bee conservationist after one of our shows. They said how we’ve gone from one million hives in the UK in 1900 to 250,000 today. That’s a 75% drop, whilst there are billions more people. We saw it was World Honey Bee Day coming up. So we wrote, produced, shot and edited this track in a week…

The track and the project behind it are a great example of musicians doing something direct to make a difference. Too May T’s, along with Bees for Business, are raising money via IndieGoGo. People can donate towards setting up Too Many T’s-branded bee hives, with the duo giving out some exclusive rewards in return. As they say:

Let’s not wait for the Government or for someone else to do something about it – let’s make the world a better place together – NOW.

But the real queen in this campaigning hive is the track that goes with it.

Not Enough Bees is the perfect example of wry music with a social message. The track is reminiscent of the golden era of hip-hop. It has stripped-back production, synthetic bass, and cymbal and hi-hat led drums. Leon and Ross rhyme slickly throughout the track, showcasing their vocal dexterity. But it’s the lyrics which stand out and show the duo’s ingenious brand of music, as they mix facts with humour:

The duo’s music is often tongue-in-cheek, with tracks like Neighbours – a tune besmirching the people who’ve ‘moved in next door’. Their music could often be regarded as ‘conscious’, with Too Many T’s trying to get across political and social messages. The track Tearing Us Apart is the perfect example of hip-hop meeting something deeper. It deals with political disenfranchisement and the social divisions that are becoming more entrenched:

Too Many T’s told The Canary they feel humour is a useful tool to get across deeper messages:

Well you got to laugh haven’t you? The world is in a precarious place politically. But it’s even more so environmentally – a product of the former to many extents. So we’re trying to raise some awareness and knowledge with what we have! Music is a perfect medium to tackle serious issues, as you can get around the boringness of everything. And have some fun too…

The duo fit perfectly in a growing movement of conscious artists. From the current roots reggae revival with artists like Natty and Kabaka Pyramid, to political theatre and film, via photography, satire and grime, politically and socially challenging art is experiencing a renaissance. Too Many T’s told The Canary the effect of the arts on the world around us is “all important”:

Most musical movements, hip-hop, punk, grime alongside art movements… all stemmed from either oppression or corruption of some kind. Having an artistic medium to connect with thousands of people feeling the same way as you is vital to change. Art has the ability to transform whole districts into desirable locations to live. It also has that power to change things that are just plain wrong in society. And it’s well away from the influence of corporations and controlling powers.

Too May T’s are not fresh faces on the conscious/hip-hop music scene. But they are becoming trailblazers in using music to further political and social messages. Not Enough Bees is a standout example of this; even more so because the track will directly help the cause it’s showcasing. Hip-hop and bees are not something you’d usually hear in the same breath. In this case, Too Many T’s are once again breaking ground, in the name of the planet.

– Support Too Many T’s IndieGoGo campaign and find out more about the honeybee.