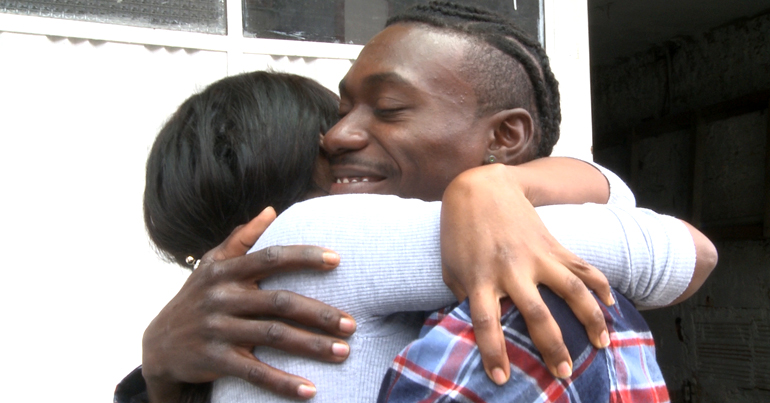 A new film has tracked the impact of Colombia’s historic peace process on one former fighter from the country’s 52-year civil war.

From FARC to film

Rapper Esteban Pérez hit headlines in 2016 because of his connection to the Revolutionary Armed Forces of Colombia (FARC). The left-wing guerrilla group signed a historic peace agreement with the Colombian government on 23 June 2016 and marked the event later on with a major conference. teleSUR described Esteban as one of its “highlights”. And a new documentary goes behind the scenes of the “FARC MC“.

Esteban was spotted at the FARC concert by Pablo Araoz, a famous Colombian reggae producer. Pablo offers Esteban the opportunity not only to record music but to perform in the country’s capital Bogotá. And the film Listen to My Song follows the rapper as this path goes in unexpected directions.

The film opens up with director Danny Mitchell accompanying Pablo into the transition camp where Esteban lives at the time. We hear of how poverty and armed conflict between “paramilitary and gangs” led Esteban to join the FARC at the age of 13. Esteban also states an ongoing commitment to the rebel group’s ideals beyond the peace process, saying:

The film rejoins Esteban and Pablo six months later in Bogotá. While the rapper is recording new music with Pablo, he makes contact with his sister for the first time in more than a decade. As a result, Esteban abandons recording to spend time with his family for the first time since he joined the guerrilla group. Mitchell follows the rapper to his hometown of Cali as he reconnects with his sister, dad, auntie and wider family. Esteban’s mum, however, remains a haunting absence throughout.

Listen to My Song ends as Esteban returns to the capital and climbs on stage for his long-awaited performance.

Listen to My Song is a film about connection: Esteban’s connection to the FARC because the group saved him from a life of poverty and crime; the connection that music gives Esteban to a life beyond the peace process; and the deep family bonds that welcome him back after more than a decade in the wild.

On the other hand, the film also shows disconnection: an ever-weakening link between Esteban and the FARC as he reconnects with his family; the absence of his mother, which impacts not just Esteban but his whole family; and one scene shows the radical disconnect between FARC actions and the public narrative around the group. Regarding the latter, Esteban’s auntie asks him about an incident in which police officers were reportedly lined up and executed by FARC guerrillas. But the rapper explains that two FARC units mistook each other for military forces. They both opened fire and the officers were killed in the crossfire. She exclaims:

The news and media make you hate the FARC… to make people think they were murderers, soulless people. I didn’t know my nephew was in the FARC!

She then recounts how a “teacher” taught her how the FARC fights for equality for the poorest people, showing at once the power of both familial connection and media disconnection.

Listen to My Song, like Mitchell’s previous film Reykjavik Rising, tells a personal story behind one of today’s most historic events. Unlike his previous film, Mitchell has this time focused on how one person’s emotional journey can reflect that of an entire movement’s. As the Doc’n Roll Film Festival, which hosts the premier on 18 November, says in its programme:

If his achievement is possible, perhaps it’s conceivable that [the] country can move on, too, from its troubled past.

Speaking briefly to The Canary, Mitchell said that Esteban:

is doing pretty well. He’s a positive person and seems to keep a positive outlook on life most of the time. He is no longer getting all the attention he received during the height of the peace process, which I’m sure is difficult for him. But he is still doing some concerts… He regularly goes through to Cali to see his family and is obviously enjoying rekindling those connections.

Listen to My Song gives depth and emotion to an event that, for many in the UK, may just be a series of headlines. And it may help draw attention back to a situation that hasn’t yet been fully resolved.

– Find out more about the film on its kickstarter page.

– Make it to the premier in London, if you’re able. It includes a Q&A with Mitchell.

– Read more from The Canary about Colombia.