Austerity Christmas: 'If you're a person of colour in Cornwall you're f***ed' - The Canary 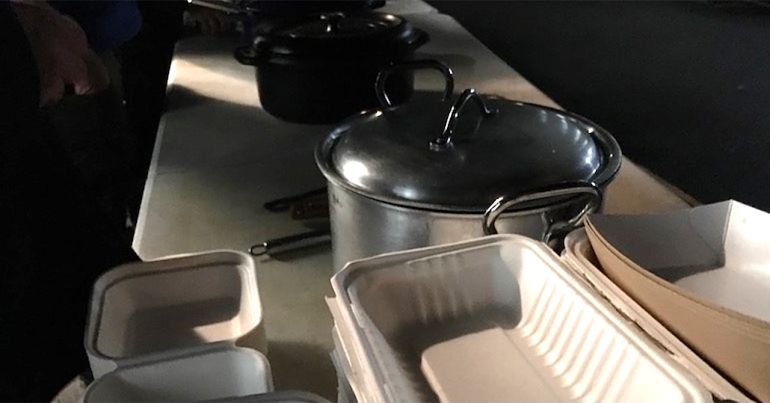 The Canary has been speaking to real people on the ground at foodbanks and street homeless projects in Cornwall. 17 neighbourhoods in the county “are among the most deprived (worst 10%) in England”. In 2016, over a quarter of Cornish children were identified as living in poverty. Cornwall also has the third-highest rate of homelessness in the country, and it faces the specific challenges of rural deprivation and poverty.

The Penzance Street Food Project is open. Every night, members of the local community work as a team to feed people. A cold wind whips along the side of a carpark in this Cornish seaside town, but within ten minutes they’ve set up tables filled with hot home-cooked food and drinks. Over twenty people quietly queue up for food. Despite statistics in January claiming that homeless numbers are falling in Cornwall, the story out on the streets appears to be very different. Initially Adam (not his real name) says he really doesn’t want to speak to The Canary. Later, he says, “I think I would like to tell my story after all”.

“I got court-ordered out of my home,” Adam explains, before claiming “but the lead-up to that was racially motivated”. After his kids left home, Adam admits that he tipped over the edge after dealing with “lots and lots of racist shit for years”. Two years ago, he faced criminal charges for a drugs offence and lost his home. He’s “been sofa surfing ever since”.

As The Canary reported, the number of hidden homeless people is rising, and it’s nearly impossible to record statistics accurately for the number of people affected. Many, like Adam, sofa surf. Adam used to be self-employed. After losing his home, he tried to keep working, but he was living in his car and it became impossible. “I couldn’t get enough work to keep things together”, he explains. “I had tools here, tools there, clothes in another place, it really messed me up”.

After applying for Universal Credit, Adam received an advance loan. He’s got to repay this over the next year. So he doesn’t have enough money to even think about trying to rent somewhere. “It’s one of those things they do to muck you up”, he says. Adam desperately wants to get out of this situation. He wants to get his life back on track, but says he doesn’t know how to. “I don’t know what the hell I’m going to do actually”, he says quietly.

“If you’re a person of colour in Cornwall…”

Adam moved to Cornwall in 1999. His children were born and grew up here. But looking back, he says he experienced continual racial abuse. “I had a swastika drawn on my wall once”. He continues:

I’ve been accused of everything over the years, they make so much rubbish up about you. If you’re a person of colour in Cornwall, you’re fucked.

The most recent data available shows that a significantly lower number of Black and Ethnic Minority (BAME) people live in Cornwall than the rest of the UK. Only 0.1% of the people living here identify as Black African with another 0.1% identifying as Black Caribbean. Since the EU referendum, recorded incidents of racially motivated hate crime have soared.

Adam feels that the lack of support he’s had is “part of a purposeful policy to keep people of Colour away” from Cornwall.

Adam needs to move again soon; to find another friend and another sofa. He’s not sure how to turn things around. More than that, he feels silenced because he’s Black and fears being targeted because of this:

Adam’s hope is that some “genuine, level-headed people” move into positions of power to enact change. He feels that “the wrong people hold the resources” so “let’s get some nice people in”. But that won’t change things immediately. Not having a home, he explains, “impacted on my health”. He can’t cook, so the hot meal at the Street Food Project is a lifeline. Adam says he doesn’t even want to think about Christmas:

I just want my life back. It’s terrible. This year I don’t know what the hell’s happening. It’s unnerving and disconcerting.