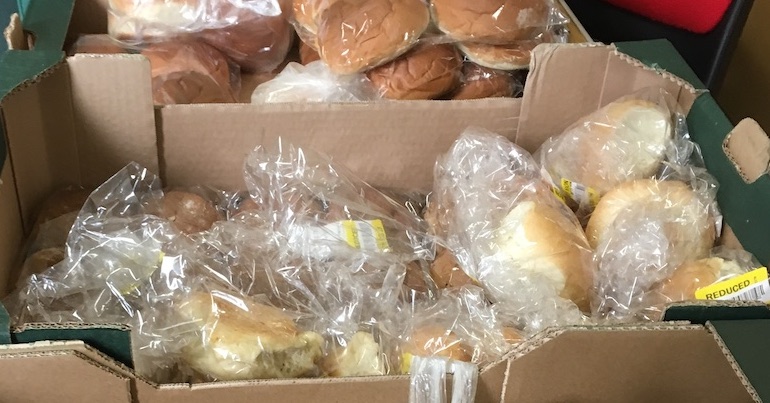 Across Cornwall, all the foodbanks The Canary spoke to reported an increase in demand since Universal Credit has been rolled out. They all rely on donations of food from the public. But as demand soars, they’ve also found ways to redistribute vast amounts of food that would otherwise go to waste.

“The broccoli was too big”

According to Fareshare, “1.9 million tonnes of food is wasted every year” across the UK supply chain.

Fareshare is part of the Global FoodBanking Network, “an international movement working to reduce hunger by tackling food waste”. In 2017, it “redistributed enough food for 36.7 million meals”. Many of these went to elderly people, homeless shelters, school breakfast clubs, or the rising number of people facing food poverty across the country. But it only handles “approximately 6% of the surplus food available in the UK”. Through Fareshare, some food directly is directly redistributed to foodbanks.

At the Wadebridge Foodbank, volunteers explained how the Trussell Trust stipulates that out-of-date food can be offered as an extra, but can’t be included in the three-day food packages. So they came up with an ingenious idea. They gave any remaining out-of-date food to a local farmer. He fed this to his chickens and then supplied the foodbank with fresh eggs.

Foodbank boxes are filled with food that won’t go off: through necessity. So many people forced to use foodbanks won’t have fresh food. At Wadebridge, one volunteer explained that a local farmer approached them and offered his crop of broccoli because:

The supermarkets said it was too big. So they wouldn’t take it.

And as seasonal demand for turkey crowns soars, the volunteers also told me that one local farmer “donated three freezers full of legs and wings because supermarkets won’t sell them”.

Donovan Gardener, meanwhile, has been running the independent Camborne Foodbank for ten years. When the foodbank opens, there are boxes of bread freely available on the tables. It may have run out of date yesterday, but those people visiting are free to take as much as they need or want to. He says he’s seen the volume of food waste rise continually since he’s been there:

Not so long ago, we were able to share out 9,864 Cornish pasties. ‘A supermarket’ wouldn’t take them because the delivery was seventeen minutes late. Another time, we had 3,000 boxes of salmon en croûte – they’d been rejected because they were loaded the wrong way round in the box. And then there was the time we had 16,000 sausage rolls. The shop tested them and found that the pastry rose 2mm too high. So they wouldn’t sell them.

Meanwhile, across Cornwall, reports are emerging of people going through bins to look for food.

As Cornwall Community Foundation (CCF) reported: “more people from all walks of life are having to use food banks now and more and more children go to school hungry”. And as The Canary reported, UN investigator Philip Alston stated that foodbanks were essentially turning into a “safety net so that [people] don’t quite starve”, in the absence of effective government support. And he stressed that the government risked sending out the message that it “can just outsource these things” in the “hope that a private community is going to take it up and keep people alive”.

These are stories from just two of the UK’s foodbanks. And it’s a shocking insight into the amount of food that’s wasted across the country. Yet food prices continue to soar and supermarkets continue to clamour for ever greater profits.