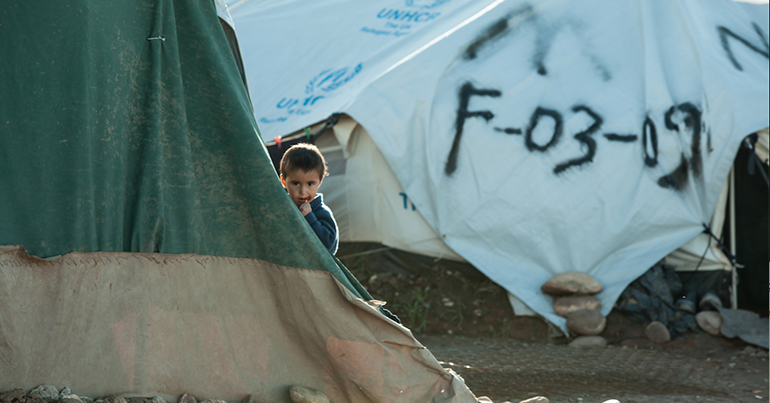 On 10 December this year, 164 of the United Nations’ 193 members adopted the Global Compact for Safe, Orderly and Regular Migration. The UN called it:

a ground-breaking UN-led global migration compact which is designed to make the growing phenomenon safer and more dignified for millions on the move.

But while it may be “ground-breaking”, receiving overwhelming support, it isn’t legally binding. It’s therefore difficult to see how it can make life “safer and more dignified” for Syrian refugees living in northern Lebanon today.

Possibly because the war in Syria appears to be nearing an end, it isn’t hitting the mainstream headlines anymore. But Syrian refugees, displaced all over the world, are still suffering. So The Canary travelled to northern Lebanon to speak to those still affected by the war.

Lebanon is roughly the same size as Devon and Cornwall combined, with a population of around 5.5 million people. This includes an estimated 1.1 million Syrian refugees.

While the country’s so-called ‘civil war’ ended in 1990 – so-called as international forces were also involved – conflict is still close at hand. The threat from its southern neighbour in Israel is still very real. And the scars of that ‘civil war’ are immediately visible as derelict buildings still artistically pierce the skyline. But the art, coupled with a hipster Beirut, mask the fundamental problems Lebanon has to deal with. Running water in the city is undrinkable and, unless you can afford a private electrical generator, you face several electrical power cuts in a day. In addition, the 2015 refuse crisis still affects Beirut today.

Lebanon also has a public debt of over $85bn, meaning it has the third highest public debt in the world. Despite these statistics and parliamentary elections in May this year, political parties have still failed to form a government. This places the economy in further difficulty.

In short, it’s not the ideal place to seek refuge. And of the 1.1 million estimated Syrian refugees in Lebanon, 266,000 live in the governorates (provinces) of North and Akkar. This area is one of the poorest and most deprived in the country.

The course looks at nonviolent communication, conflict management, and dealing with gender-based violence among the refugee and Lebanese communities. And these men have joined the course seeking behavioural change and support.

Course facilitators told The Canary that some of the men who have attended these courses may have used violence at home. So this course helps them understand the effects of their behaviour and the different types of violence women suffer; violence that is not just physical but also sexual, verbal, psychological, and even financial. There is also support for women suffering from domestic violence.

A past participant told The Canary how he spent 18 days in prison in Syria because someone reported him for following anti-government media. He said he’d seen some “very ugly things”, including the hanging of children. A current course participant – a former Lebanese soldier – still bears the marks of war. He has severe skin burns from the fight against Fatah al-Islam, a militant Islamist group, in Tripoli in 2007.

The way of life they once had in Syria is gone and it may never come back. And Syrian males in Lebanon have little in the way of employment opportunities. In any case, the political rhetoric is anti-refugee. These men told The Canary they left with little more than the shirts on their backs and now live in crowded and squalid conditions. But despite this, the pressure to provide for their families is still there. The traditional male finds this difficult to cope with.

Today, the remnants of the 2007 fight mentioned above can still be seen, as military checkpoints mark strategic areas in Lebanese cities and highways. But these checkpoints are a source of concern for Syrian male refugees. It’s here where they’re most likely to be stopped by Lebanese security, asked for IDs, and (should something be out of place) deported. Given the political situation, this is a very real fear.

While Lebanon is a near neighbour of Syria – they speak the same language and many visited and worked there before the war – they still described a feeling of isolation. It’s a traumatic existence.

These men have sick and injured children to care and provide for, but little income to do it with. Socio-economically vulnerable refugees can receive assistance from the UNCHR, the UN’s refugee agency, under the Multi Cash Assistance Programme (MCAP). The UNHCR told The Canary that each family receives 260,000 LBP (£136.31) per month. But some families stopped receiving this income “because of the limited resources available”.

There was also a payment of $27 (£21.30) per person per month from the World Food Progamme. These men received this payment, but told The Canary it was discontinued in September 2017.

In addition to covering essentials such as food and rent, refugees use this assistance to cover medical expenses for severe illness and disabilities. And as survivors of war, these expenses aren’t trivial. This payment, along with dwindling savings from Syria and the meager amount they earn from odd jobs, is all they have to survive on.

The 24-year-old son of one of these Syrian men needs major facial surgery, for example. He was shot in the face during the war in Syria in 2013. According to a letter seen by The Canary, surgery would cost between $5,500 and $8,500. As the family cannot afford this, he has been living in pain for the past five years. These letters are in English despite Arabic being their first language.

Another man’s six-year-old daughter has a neurological problem, which the family describes as “dandy walker syndrome”. She is paralysed from the knees down so she can’t walk. She needs specialist treatment, which is expensive, and each bus trip to the hospital costs 20,000 LBP (£10.50); a significant sum in Lebanon as it’s equivalent to one day’s pay. This girl’s father occasionally works in construction. They are waiting to get help from a local NGO called Restart, which helps victims of violence and torture.

A sister-in-law of one of the men, who appears to be little more than 10, is in fact 29. The family told The Canary she has meningitis and lies curled up in the corner of the room on a cushion needing a diaper. She is waiting for assistance from the same NGO because the Lebanese health system is so unaffordable. But the family told The Canary this NGO has to deal with 5,000 cases every month.

There is no support from the Lebanese government either, as they don’t recognise Syrians as refugees. So help is not coming soon.

International agreements that highlight the plight of refugees are welcome. But they must have teeth. And the recent Global Compact agreement has none.

The international community needs to spend much less time on the photo ops afforded by toothless global agreements. Instead, it needs to get real and direct resources towards rebuilding the lives of the many people who need urgent support. People’s lives have been ruined, maybe irreparably; so a non-legally binding agreement will do little for the safety or dignity of refugees.