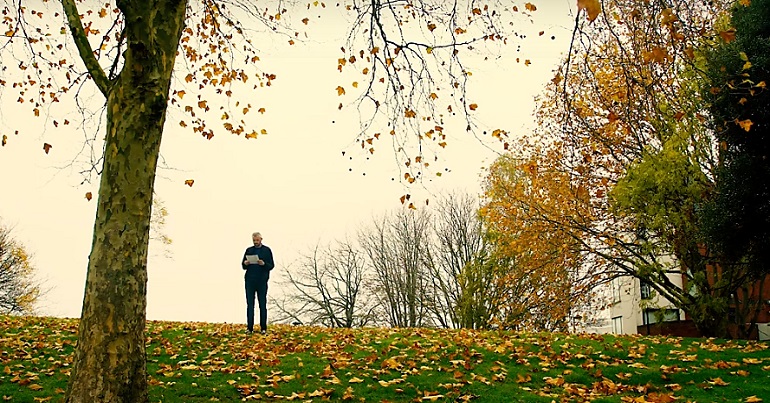 An author is releasing his most personal work to date. And it’s a very brave move from what he’s previously penned, as he’s best known for writing award-winning children’s books.

Giles Paley-Phillips is originally from East Sussex. After spending time as a musician, he turned his hand to writing. A successful career followed in children’s literature. He wrote books such as There’s a Lion in my Bathroom and The Fearsome Beast. But now, he’s drawn on his own experience of childhood grief and penned a novel for an older audience. So The Canary caught up with him to discuss loss, writing, and the cathartic nature of being a novelist.

One Hundred and Fifty-Two Days is a novel about a teenage boy coping with his mother’s terminal illness. As its website says:

Following a bout of pneumonia, the boy isn’t allowed to visit his mum who is receiving end of life treatment in hospital. His home life feels just as detached as his father turns to drink to mask the pain and escape the challenges they face as a family.

The book is based loosely on Paley-Phillips’ own experience, although he was much younger when his own mother died than the character he has created. He was six when he lost her to leukaemia. He told The Canary that writing One Hundred and Fifty-Two Days wasn’t an easy process:

I knew I always wanted to write this book and share my story, so the actual decision to write wasn’t a hard one. However, once I started to write it, I knew it wasn’t going to be an easy process and I did have to take long breaks – sometimes months between sittings to get through it as it was painful at times.

In the book, the main character turns to someone to help him cope with his mother’s traumatic situation. The author explained:

As a coping mechanism, he develops a powerful bond with his sparky and free-thinking physiotherapist, called Freya. Unlike anyone else in his life, Freya is able to lift his spirits and fill the void left by a distant father, a scatty grandmother and of course his dying mother, and finally open his eyes to a world full of possibility, hope and love.

One Hundred and Fifty-Two Days is part-fiction. While the circumstances in the book are not dissimilar to the author’s, he has created some of the situations. But what stands out is his style of writing.

Paley-Phillips has used what’s known as “free verse” in the book. As Literary Devices describes, this is:

poetry that is free from limitations of regular meter or rhythm, and does not rhyme with fixed forms. Such poems are without rhythm and rhyme schemes, do not follow regular rhyme scheme rules, yet still provide artistic expression. In this way, the poet can give his own shape to a poem however he or she desires.

It’s exactly this freedom of expression that Paley-Phillips was looking for. He told The Canary:

I’ve always loved poetry and lyrics. Having played in bands and written music, I love the musicality of language the poetry is, and so I always wanted to write this story in verse, as it would allow me to tap into my love of that. But also, I feel that it has allowed me far greater freedom to express the emotions I wanted to convey than a prose piece.

Expressing how he felt about the traumatic events of his childhood wasn’t easy. But the free-verse style, coupled with Paley-Phillips’ instinctive ability to convey emotion juxtaposed with everyday situations, has produced some moving results. For example, one section reads:

Today I said goodbye to mum.

She is going in

just for a little while

She’s sat on the sofa, dressing gown on

the sun burning a glow on the side

of her face, through the curtain.

Nana Q was going to walk with me

walk with me to school

even though I’m old enough,

I usually walk on my own, but today

they thought Nana Q should go

Writing One Hundred and Fifty-Two Days has taken its toll on Paley-Phillips. There would have been elements of reliving many difficult moments during the process. And while he said parts of this have been cathartic, it has been so hard that he currently isn’t sure if he even wants to write again. He told The Canary:

The experience of writing and getting this book published has been bruising, and I’m currently wondering if I want to delve into writing again currently. Not to say I’m not grateful to see this book finally going to print, but it’s been a battle for sure, as the themes of the book have really found it hard to place.

It has been cathartic and, at times during the process, I’ve found myself in quite a low place. But it has allowed me to talk about these memories and start conversations about grief and loss with a wide range of people. And that has been a very humbling experience. I would say I’ve found out a lot more about myself from writing this book and I feel like I’ve become a better person for it.

Crowdfunding is paying for the book’s publication. And Paley-Phillips has already met his target. So you can pre-order the book here.

But there is a positive point to the book. Paley-Phillips hopes it will start more conversations about grief. He believes that it’s something we’re “quite bad” at discussing in the UK:

I just hope that it opens up more discussion around grief, particularly in the UK. We’re still quite bad about talking to one another regarding death and what it means to us. It feels like we still have a long way to go. So if it opens up discussion and reflection, that’s more than I can wish for.

One Hundred and Fifty-Two Days looks set to be an extremely powerful work. While the publication date hasn’t been set as yet, all the signs are pointing to a work of accessibility and searing honesty. But moreover, Paley-Phillips may well have created a book that goes much further than telling a story. It may, as he hopes, spark much-needed conversations about grief up and down the country.