Jeremy Hunt must take action to save refugee lives, insist rescue crew in the Mediterranean - Canary 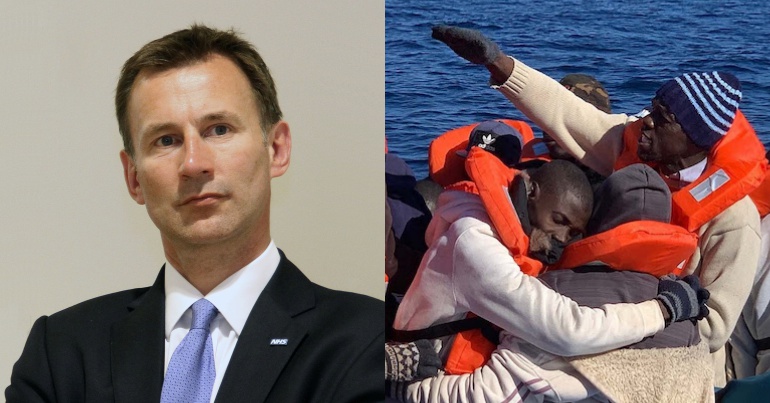 As The Canary recently reported, the only refugee rescue boat in the Mediterranean is currently stranded in Santa Panagia Bay, Italy. On 19 January, the SeaWatch 3 crew rescued 47 people, including eight children, from a dingy off the Libyan coast. But since the rescue, Italian authorities have refused to allow anyone off the boat. The situation is critical. The crew has now issued a direct call to Jeremy Hunt and the UK foreign office to take action. Two members of the Sea-Watch 3 crew spoke to The Canary to explain just how difficult and dangerous the situation is. They also had a very clear message for Hunt and the government.

“Everything is running out fast”

Sea-Watch 3 is now in its “fifth day of anchor”. But as Dan Bebawi explained, it’s a rescue vessel: it’s not set up for people to live on board long-term, so “everything is running out fast”. He said that they have little food, fresh water is running low, and “the next crisis will be sewage” because the facilities “for rescued people are not designed for long-term use”. Despite frequent calls to the Italian coastguard, there’s still no help. Bebawi said:

One by one, all of our systems are collapsing. We’ll hit crisis in the next 24 to 48 hours. There’ll also be a health crisis at some point if this continues.

Although everyone on board is healthy – for now – the people they’ve rescued “are slowly deteriorating, mental health-wise”.

But despite “big demonstrations of solidarity throughout Italy“, the Italian government won’t allow anyone off the boat, and has accused the crew of “criminal actions”. As the BBC also reported, far-right Italian minister Matteo Salvini has:

accused the captain and crew of ‘a crime and a clear desire to use these immigrants in a political battle’ and said evidence will be handed to judicial authorities.

Bebawi explained that crews from other rescue boats have been accused of “aiding illegal immigration and human trafficking”. He said they’ve heard “alarming” but “conflicting” reports about what may happen next. The crew’s biggest concern, however, is that – while the boat is stuck – it can’t “carry out rescue missions”. Sea-Watch 3 is the only rescue boat in the Mediterranean.

“We need a solution”

Whilst all of this is going on, people haven’t stopped leaving Libya. We are the only civilain rescue ship, the others have all been detained or tied up in bureaucracy… For the long-term crew… beyond the immediate problem, that’s what I’m really worried about. We need a solution. And we need it now.

And the crew has made an unequivocal call for Jeremy Hunt and the UK government to take action.

“The UK government is absolutely complicit”

As Sea-Watch 3 captain Kim Heaton-Heather said, “the UK government is absolutely complicit” in this crisis. As The Canary reported, refugees are too often intercepted and returned to Libya, where they’re allegedly locked up, trafficked, and face “every horrible, disgusting thing you can imagine”. The UK government, he continued:

is part of this system which equips the so-called Libyan coastguard, which is actually just armed militia… and literally are no more than people traffickers. The UK has facilitated them becoming equipped and getting trained. That means we have a responsibility here. The Libyan coastguard is categorically part of the human-trafficking system. And they profit from both sides when they capture people and return them to Libya, which is illegal… under the Convention of Human Rights.

“Of course,” Heaton-Heather said, “we’re partially to blame.” And he explained that it’s also vital for people in the UK to recognise that this situation is so close to home. It’s “not something that’s happening on the other side of the world”.

We’re talking two or three hundred miles from Malta – where so many people go on holiday – people are drowning… people are washing up on Tunisian beaches… It’s literally on Europe’s doorstep… We seem to be pushing people away. And the consequence is that people drown. It’s absolutely not acceptable. This is happening in part because of the UK’s interaction with this situation.

Hunt “can make a change”

“The UK,” Heaton-Heather said, “is doing nothing.” But he called on Hunt to act because:

He can make a change here and can affect this situation positively. [Hunt] can realistically have a large impact to resolve this situation in a way that doesn’t lead to unknowable amounts of death. These deaths happen all the time, and they’re not reported by the Libyan coastguard.

“It’s impossible,” he said, “to get a handle on how many people are dying.” So “the only humane reaction” is to act and rescue as many people as possible.

But for that to have effect we need the backing of the UK government as well.

As Bebawi also said, Britain and the EU “must stand by the principles they claim to uphold”. These are basic human rights because “rescuing people at sea is an obligation”:

It’s nothing new. It’s a long-standing law of the sea. They must defend human rights… Allowing people to die at sea, and allowing people to suffer after they’ve been rescued, obstructing rescue operations – it’s not only morally wrong, it’s thoroughly criminal. It’s time they stood up for their supposed ethics, to support us rather than hinder us.

Although this situation is “negative, difficult”, as Heaton-Heather said, our continued support and solidarity is vital. The crew and the refugees on board have found it “so surprising and heartwarming… inspiring”. He continued:

I wish that people in the UK could see the faces of the guests… when we show them pictures of people gathering in solidarity… the difference that made.

He explained that this “totally changes the narrative to the one they’ve been shown in such an explicit way by being imprisoned off the coast of Italy”. He said that the crew sometimes:

feel like we’re out here totally by ourselves with no one really watching or listening. So things like this prove that we’re not a minority. There’s a huge majority of people that respect human rights… That should be more important than borders.

Two petitions, meanwhile, demand urgent action to prevent more deaths and to ensure Sea-Watch 3 can continue its vital work. And it adds to the growing pressure on Hunt and the UK government to act. These may seem like small steps, but they’re vital. As Heaton-Heather said, “we’ll win in the end”. Because it’s too important not to.