The Canary spent three weeks in Venezuela. Here's what we saw. - The Canary 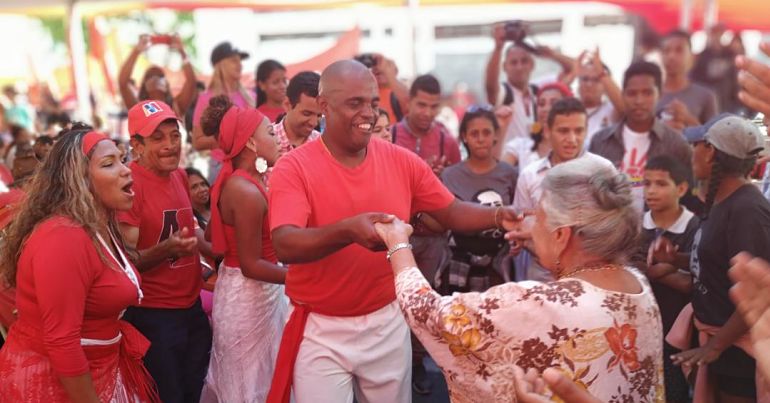 The Canary spent three weeks in Venezuela speaking to parts of the population largely ignored by the Western media. This is the ‘other’ Venezuela – in photos.

On Saturday 16 March, tens of thousands of Venezuelans took to the streets to support their government in the face of ongoing external threats. As the coup attempt continues, the Venezuelan government is trying to keep the population mobilised.

Some Venezuelan left-wing groups lament that many protests are organised by the government and not more spontaneous demonstrations of popular power. 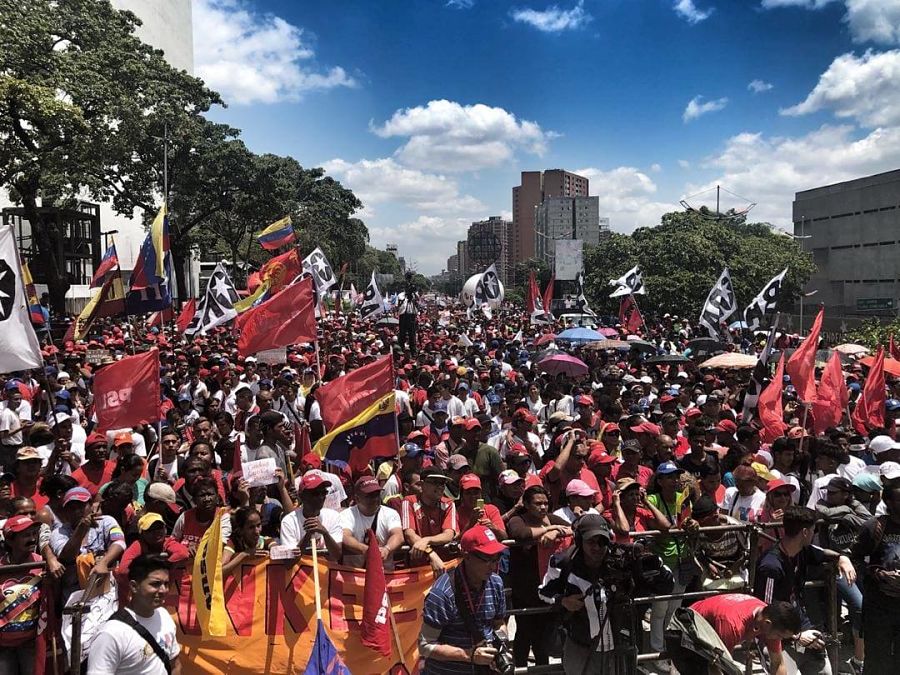 The foot protests are joined by protesters on bikes. Pictured below, the organiser is saying: “Trump, hands off Venezuela”. 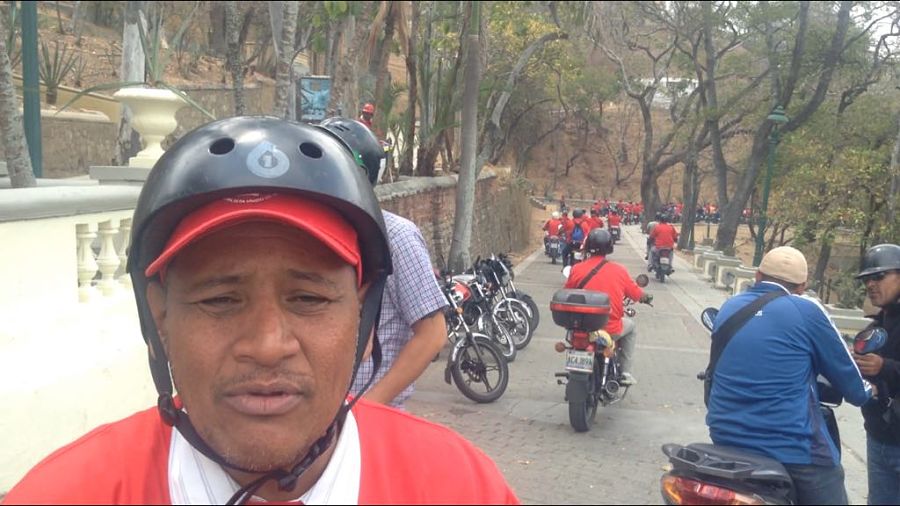 Following Saturday’s protest, Sunday saw a pro-government rally with music and Tambor – an Afro-Venezuelan dance which has its roots in the era of slavery. Until the election of late president Hugo Chávez in 1998, Venezuela’s Black and Indigenous populations were largely excluded from political decision-making. Chávez, on the other hand, was proud of his African and Indigenous roots. 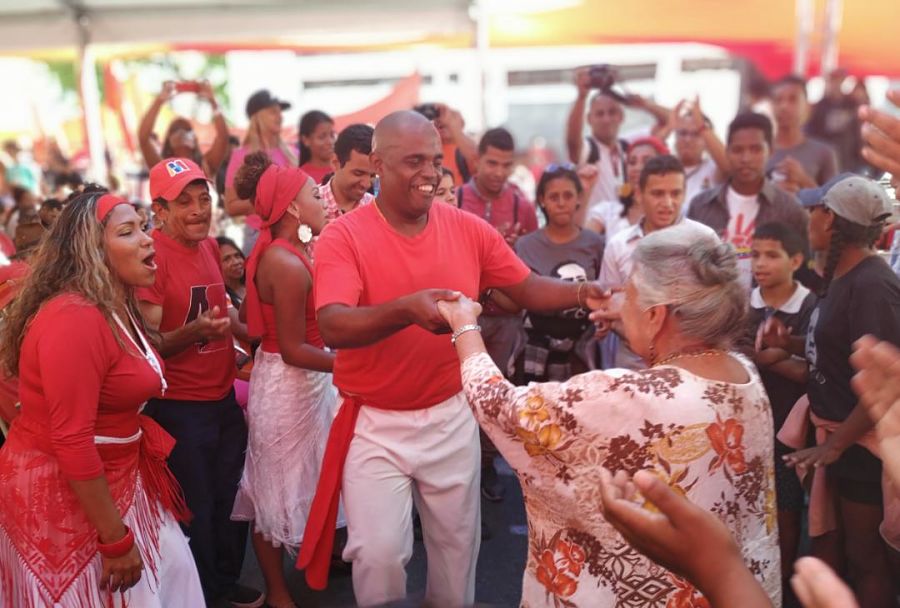 The same day, one of the capital’s main streets was converted into a pop-up sports complex with boxing, football, biking, and other activities. A child rides a bike in a red Chávez-style beret, and a group from Miranda are about to go-kart down a hill. 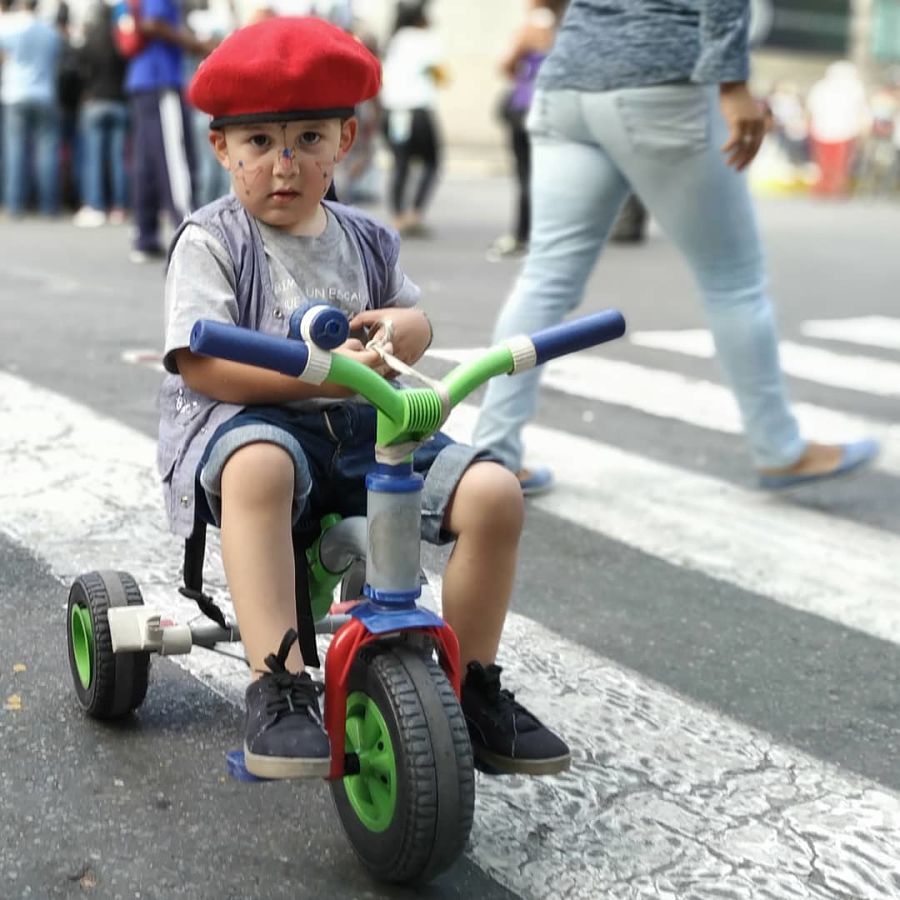 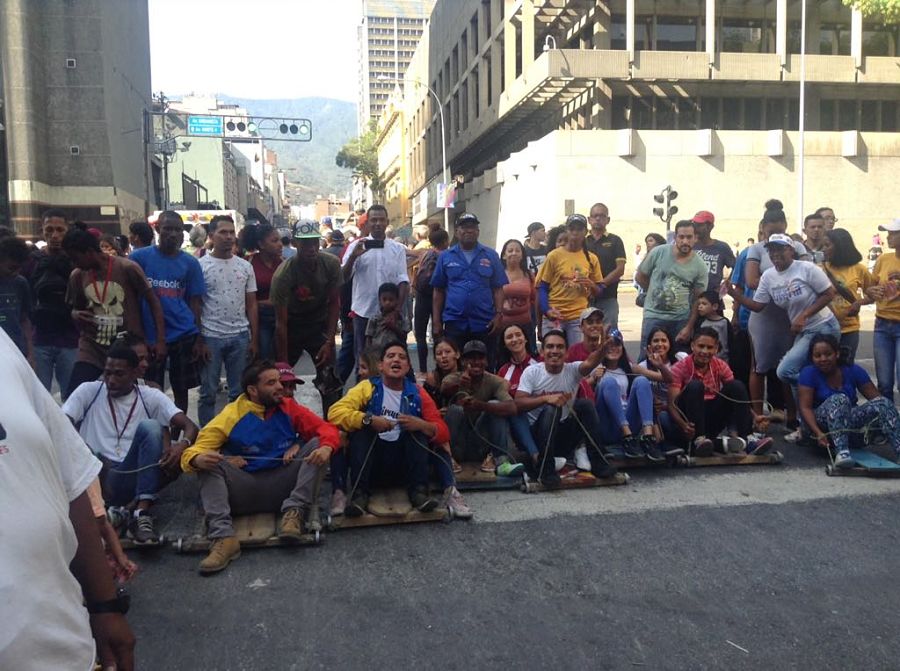 At this training ground, meanwhile, Venezuela’s civil militia is mobilising and preparing for a possible external attack. 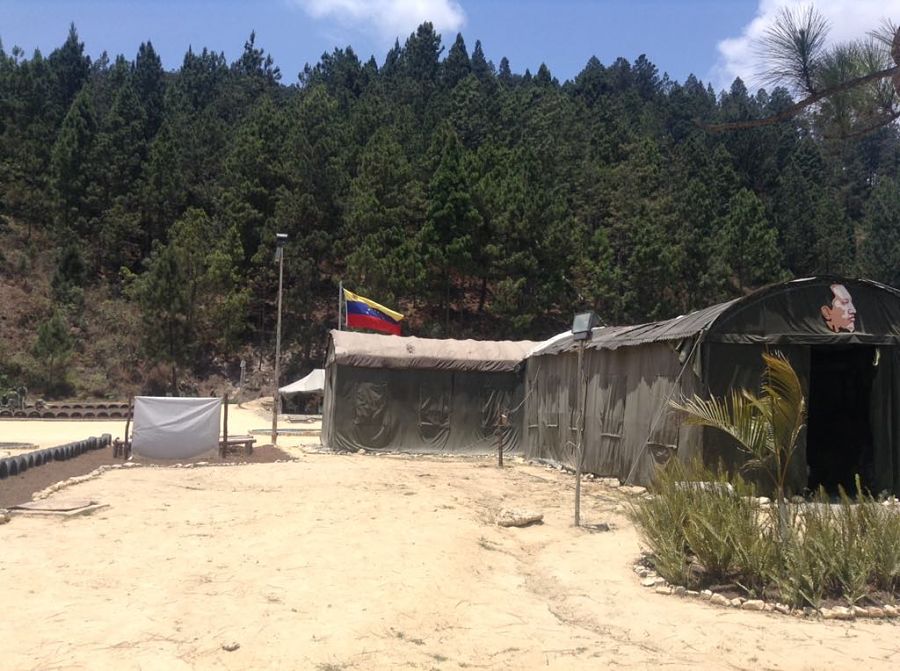 Saturday night in Caracas, and street parties are starting in the city’s poor neighbourhoods (barrios). Beef soup, rum, and Cocuy – a Venezuelan liquor – are shared. From the 1920s, Cocuy was demonised and criminalised. Wealthy rum producers in Venezuela saw Cocuy – cheap and simple to distil – as a threat to their business. They launched a campaign to associate Cocuy with Venezuela’s poor ‘underclass’ – “a cheap liquor only for drunks”. Today, Cocuy holds a fond place in popular Venezuelan culture. 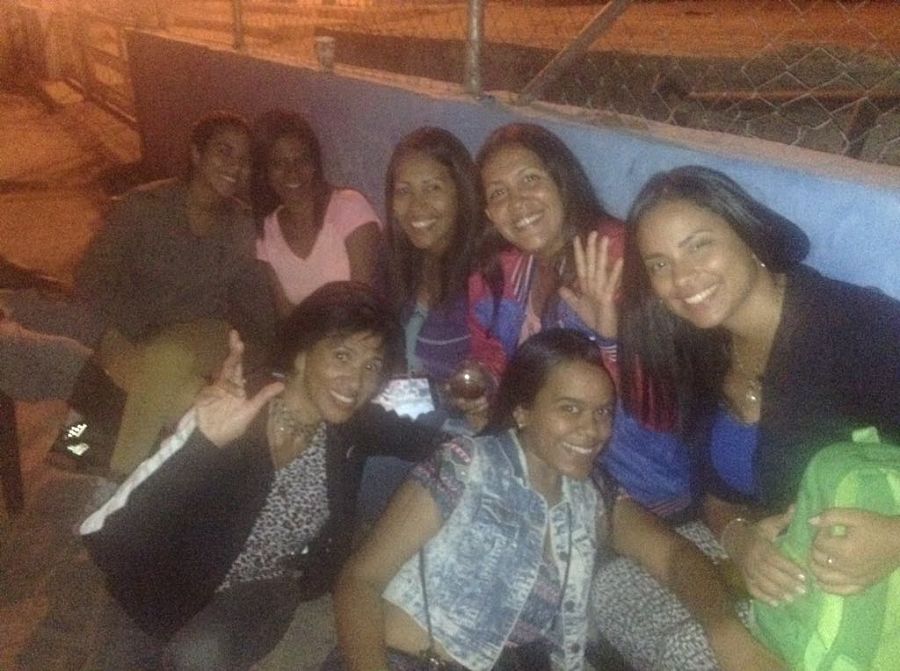 Venezuelans celebrate their carnival roughly a month before Easter. Afterwards comes the Octavita de Carnaval, a prolongation of the party. To celebrate Octavita, various youth colectivos (social organisations) organised a street party followed by a cultural event for children with acting, singing, and dancing. 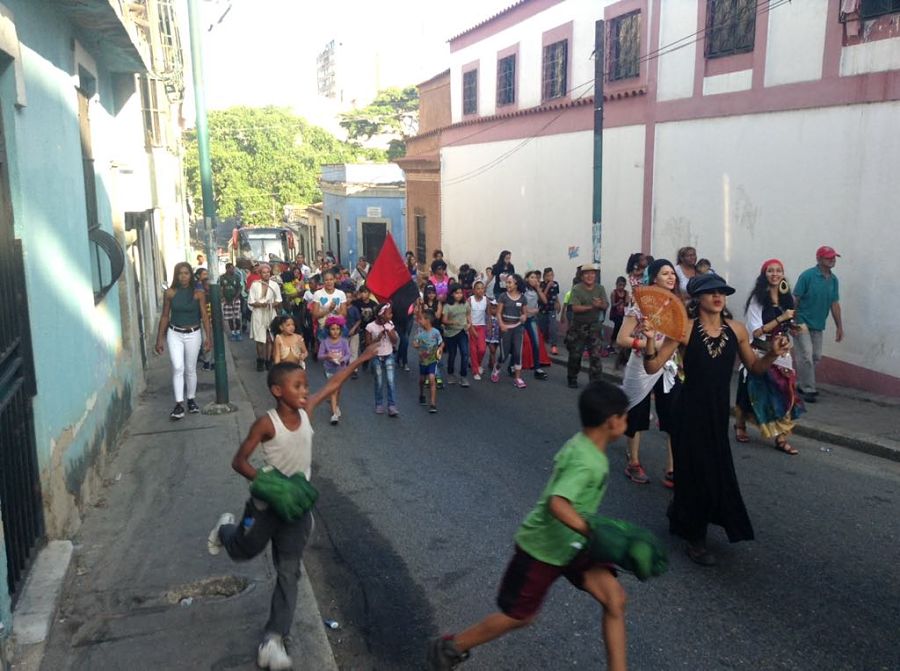 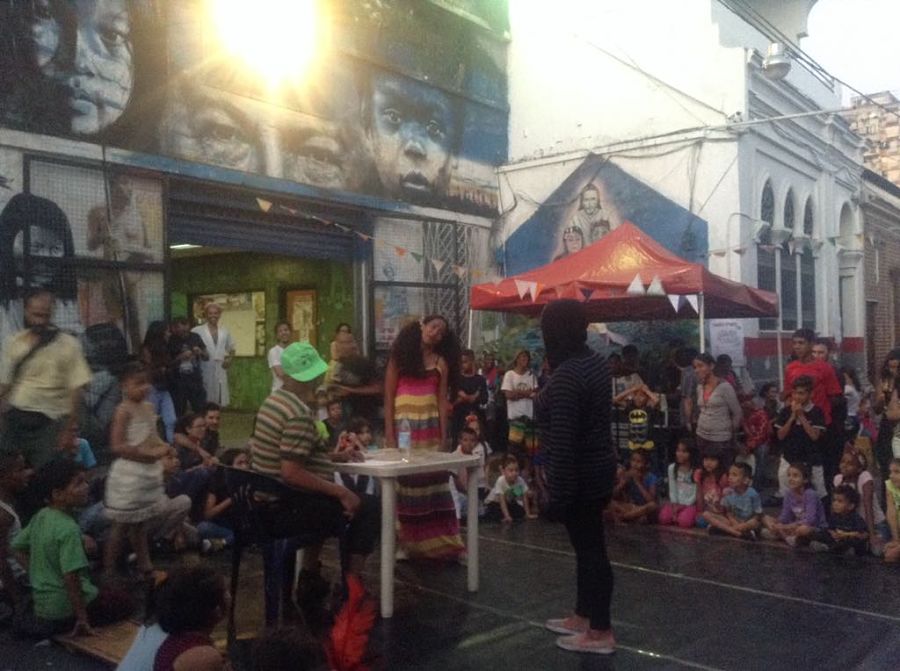 Before the local community renovated Alameda Theatre in 2013, the building was just rubble and debris. It’s now the cultural centre of San Agustín, Caracas, and host to an alternative radio station. “Even when there isn’t activity, there’s activity,” a local organiser and musician said. And the activity’s not just confined to the theatre’s walls. Here, a group of children cheer-lead to a packed crowd outside the theatre. 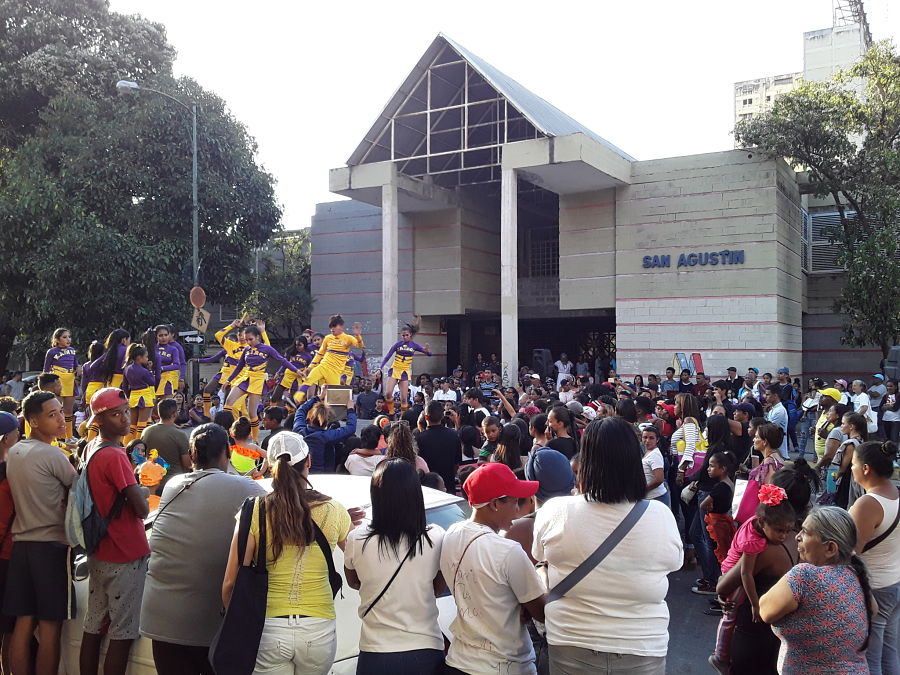 The Caracas metro system, which transports roughly two million people per day, re-opens after days out of service. 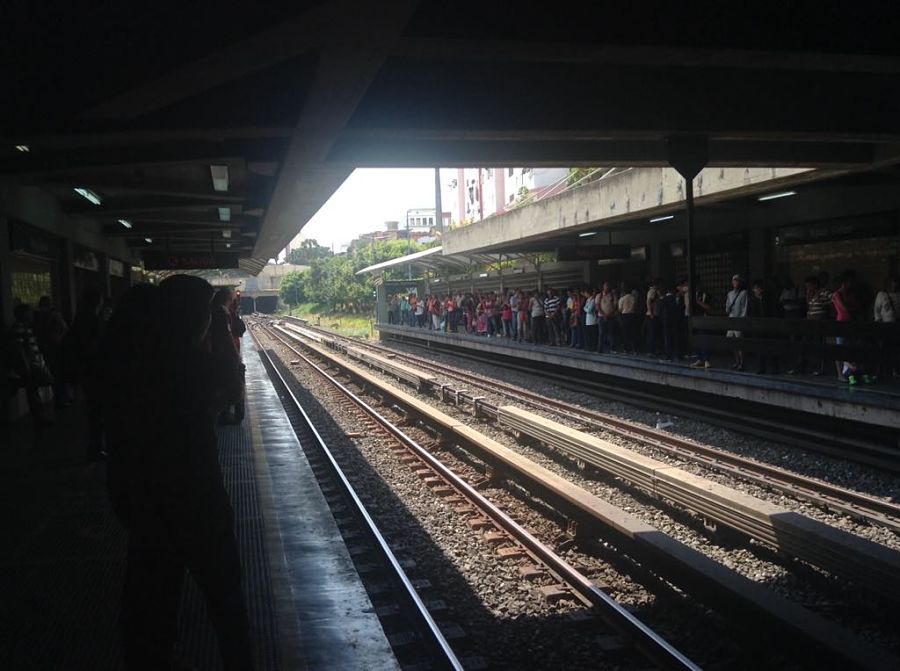 Venezuela’s economy is considerably inflated – due in part to brutal US sanctions. After paying for a soft drink with a US$10 bill, the change in Venezuelan Bolívars wouldn’t fit in my wallet. 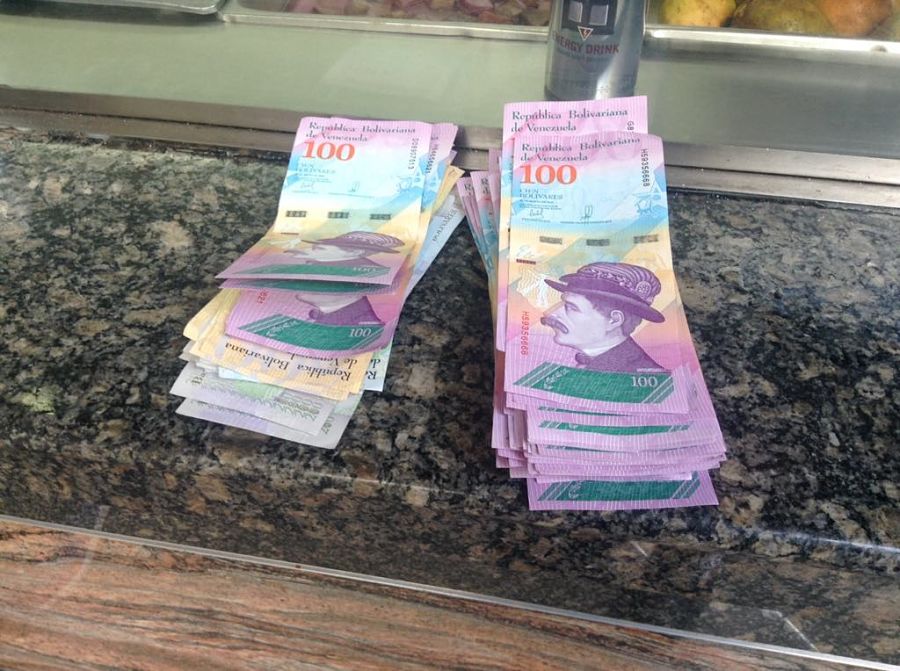 Since the economy is so unstable, the bigger supermarkets have introduced scanning systems to help shoppers monitor regularly changing prices. 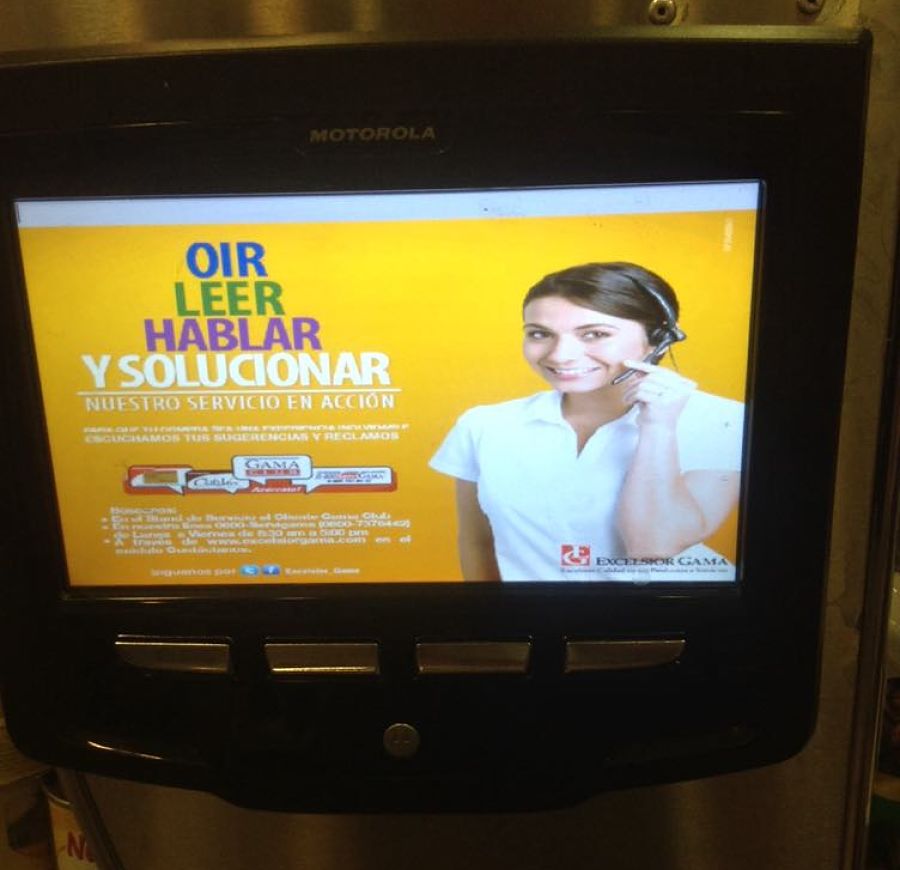 Night closes in in Antimano, a poor barrio on the outskirts of Caracas. At the time, electricity was still out following a series of nationwide electrical blackouts. Residents look over the hillside to see that, in other neighbourhoods, power is already returning. “We’re usually the first to lose electricity,” they complain, “and last to get it back.” 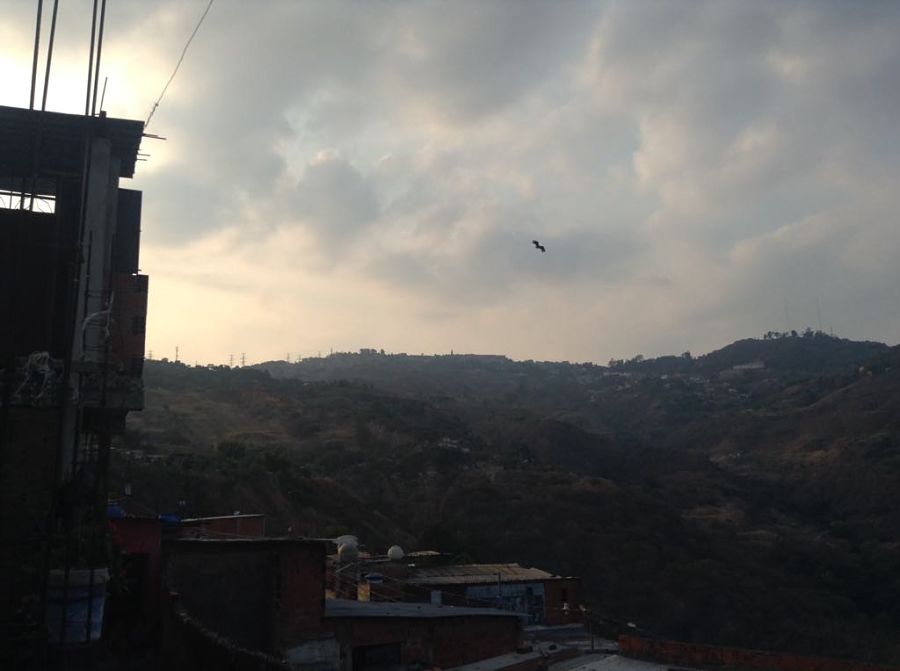 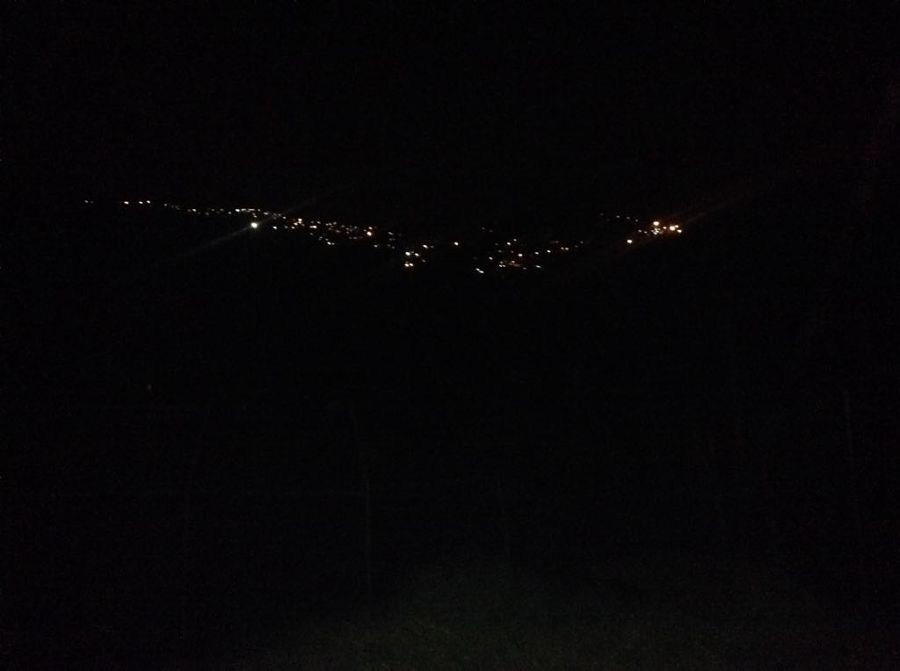 During blackouts, schools and universities are closed. The local youth are filling their time making home-made kites (part of Creole culture), and gambling small amounts of money on sports games. In better economic times, a local told me, cows could be wagered on games of Creole boules. 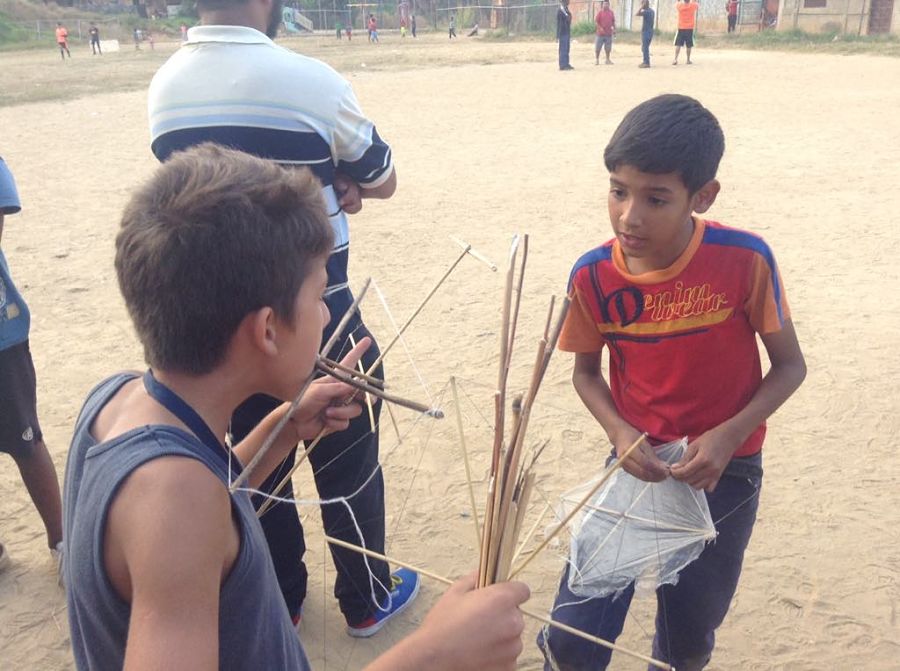 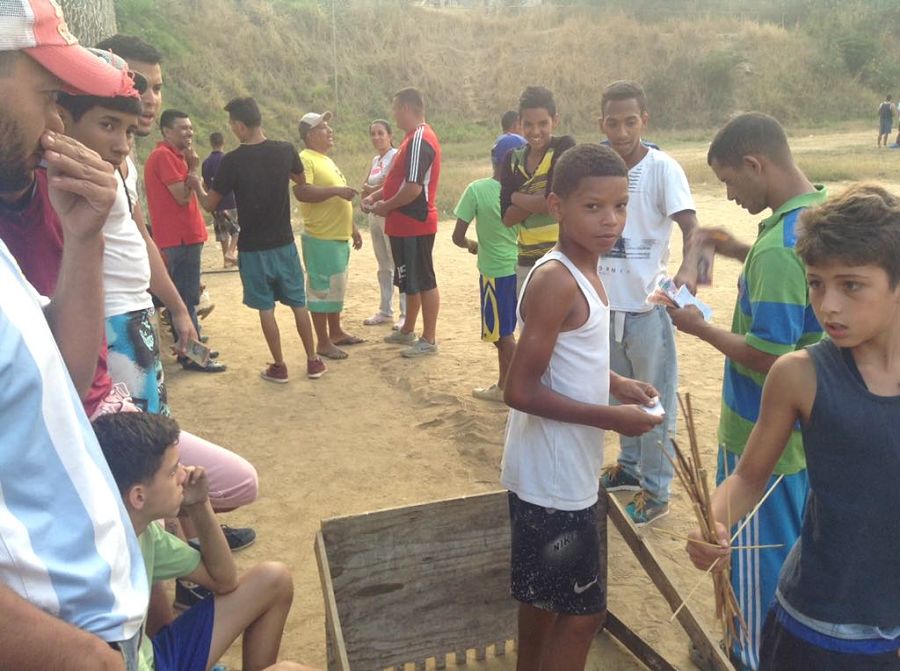 There’s no visible shortage of food in Caracas. Despite international media coverage of supermarkets filled with empty shelves, this market looks like any other. The real problem is the price. The minimum monthly salary in Venezuela is incredibly low, while food prices remain high. Helped by a huge volunteer base, the Venezuelan government is distributing food packages to over half of the population. 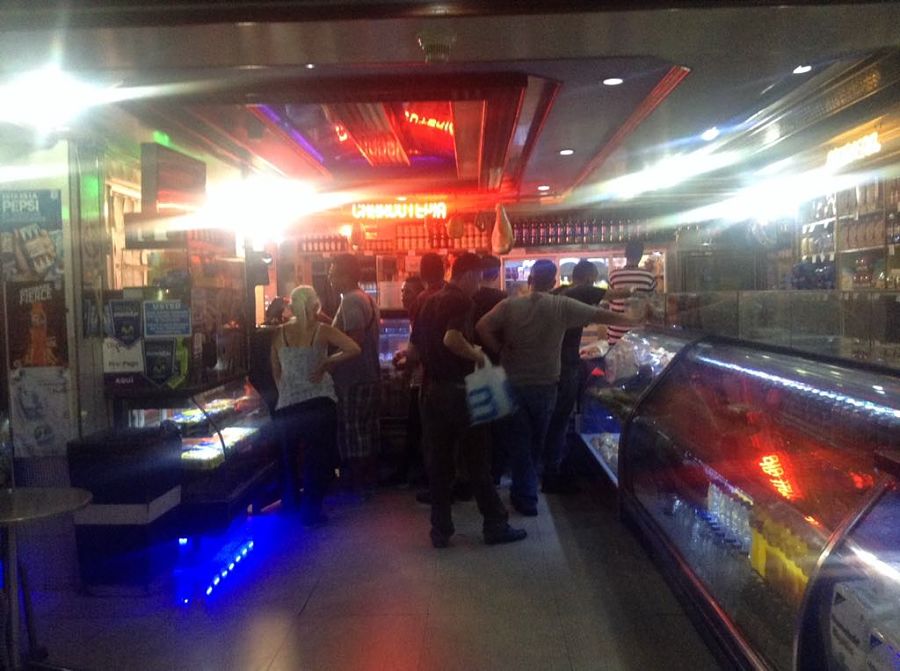 Alpargata Solidaria is one of many collective food markets that have popped up across Caracas. Here, organisers are finding ways to insulate themselves and their community from the worst effects of Venezuela’s economic crisis. 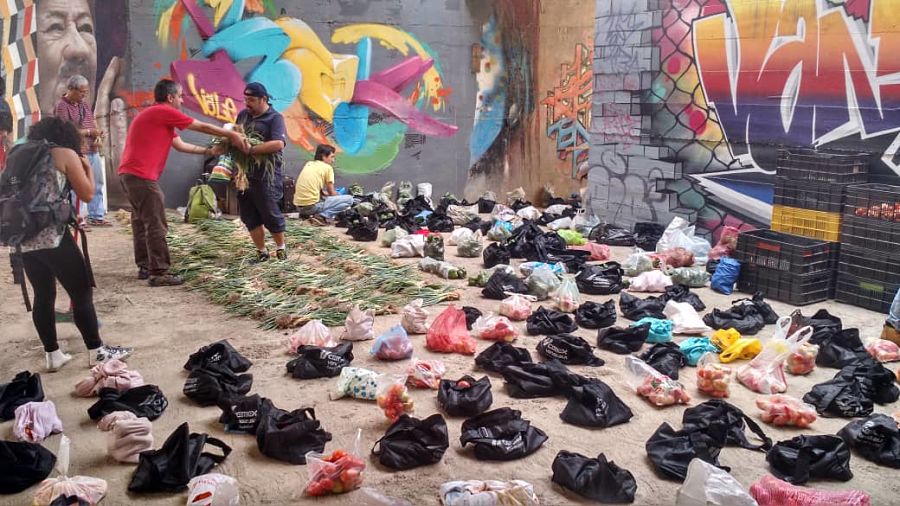 It’s a significant operation: Alpargata Solidaria feeds roughly 900 people, each receiving a 20kg bag of food. The food is distributed by local community members, who have also set up a dance and arts studio here. 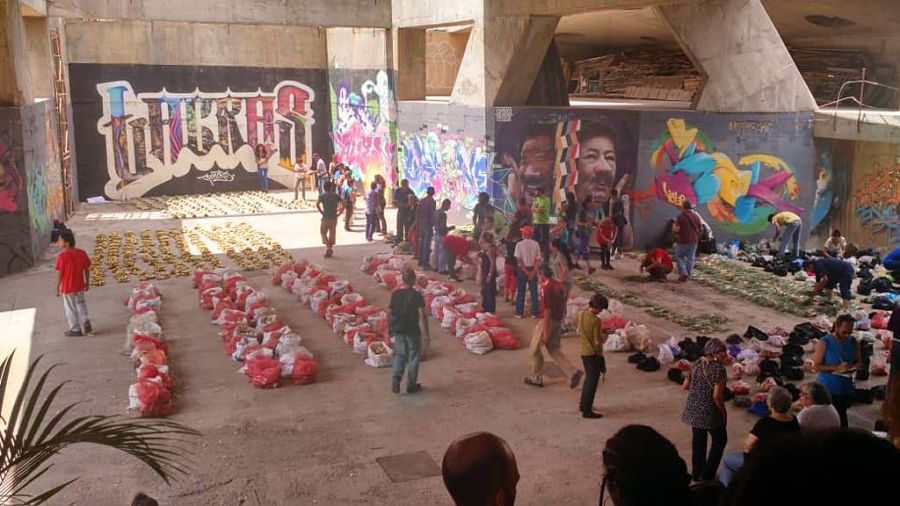 Communes are also a means of autonomous political action. I met with commune leader Herminia Ladera in Vargas, outside of Caracas. As we spoke in front of one of the community’s Food Houses, she explained: “If we don’t have community, we have nothing”. 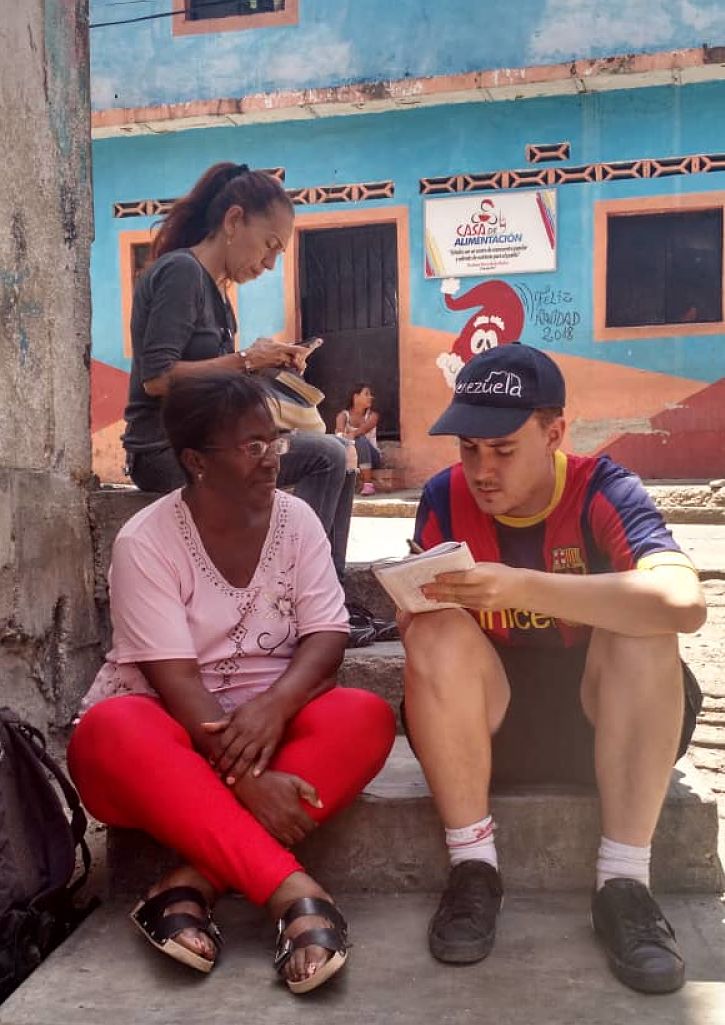 Petare is one of Venezuela’s largest and poorest barrios. A local explained that many poor Venezuelans came to Petare during the country’s oil boom during the 1970s and 1980s, and set up their lives in precarious housing conditions. There was little time for urban planning; residents set up their own electrical systems, meaning hundreds of wires line Petare’s streets. Neighbourhoods like Petare are marginalised, say locals, and the international media focuses on instances of crime while ignoring their strong sense of community. 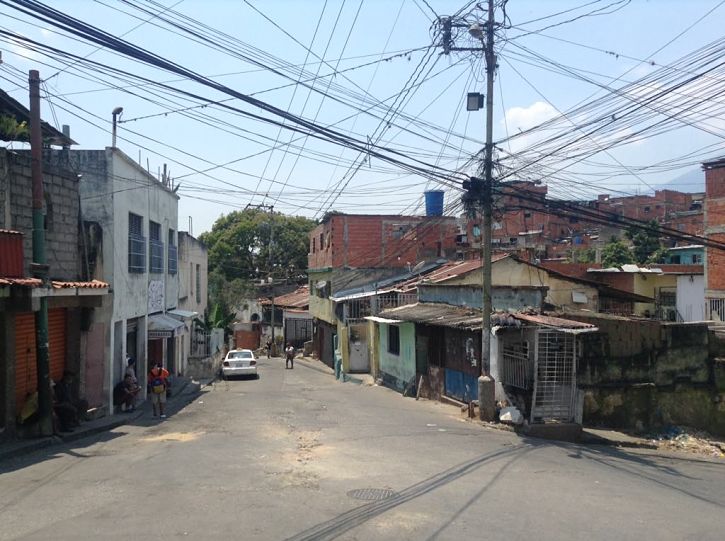 In housing project Ciudad Mariche, Petare, organisers gather in the local school on Saturdays to offer free educational courses. One local commented: “Chávez gave us the opportunity to study – to make something more of our lives”. The group read poems and sang songs. 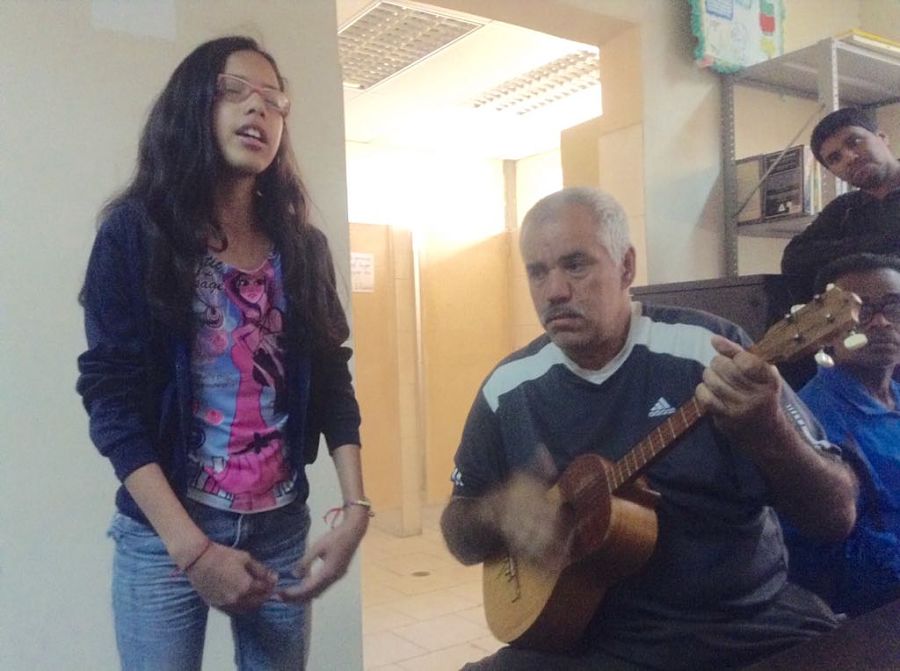 There is undoubtedly suffering in Venezuela. What you don’t see in the international media, however, are these stories of community, solidarity, and resistance.

All images via the author