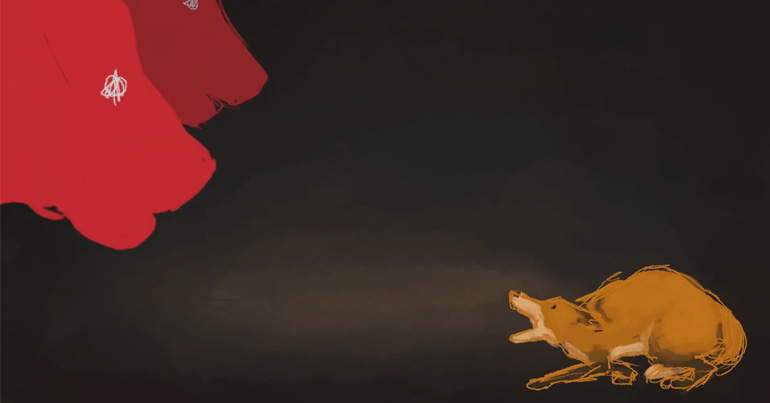 Anti-hunting campaigners have praised a new animated film about sabotaging hunts. Its creator spoke to The Canary about making the short and the impact he hopes it will have.

Sabotaging Cruelty is a three and a half minute documentary looking at why people still disrupt hunting more than 14 years after the government banned it. In the film, striking visuals accompany an audio interview with a hunt saboteur:

Its creator Ben Sinclair is 19 and studying illustration and animation at university. He told The Canary that the film deals with a subject matter very close to his heart. “Some of my closest friends and family are very invested in hunt sabotage, so I grew up with a strong connection to it,” Sinclair said. But it was a belief in compassion that struck the strongest chord. He described hunting as a “bizarre, antiquated and cruel activity” that he opposes because of his belief in animal rights. As a result, what began as just a university project “became more and more important” to him as it developed.

Sinclair based some scenes on real life hunt sabotage footage. One mirrors footage from 2012 when a West Midlands Hunt Saboteur pulled a fox from hounds, for example. And the final scene is based on video from East Kent Hunt Sabs. Sinclair explained why he felt this method was important:

I hoped [it] would bring authenticity into the film. The difficulty with animated documentary is that sometimes people fail to take it seriously when everything is technically hand drawn and ‘imagined’, in a way. The artistic license of an animation can cause people to trust it less in comparison to live action. So, by including these animations that are almost rotoscoped versions of real footage, I felt I could implement a sense of reality for the viewer.

This was important because Sabotaging Cruelty is an effort to raise public awareness around hunting and the people that take action against it. “I hope it spreads awareness about the cruelty that is going on in British countryside,” Sinclair said. “Not enough people realise the truth behind fox hunting in the UK, or even realise that it’s happening at all.”

The Canary asked Sinclair why animation is a good medium for delivering this message. He explained that it appeals to a different, wider, audience to live footage:

Animation makes it so much more accessible for the average viewer. With a topic as contentious as fox hunting, people are very easy to switch off when faced with intense, and perhaps gory, live action footage. With animation, you can remove that barrier but still send an equally powerful message. The more engaging imagery makes it easier to send this message and hopefully makes it easier for the viewer to understand it as well.

But he also pointed out that it offers flexibility in telling a story:

The freedom of animation also allows me to portray ideas and concepts that are difficult to do otherwise – such as a fox’s experience during a dig out. The more abstract animation techniques help to show the intensity and trauma that a fox experiences in that moment. Freedom with the imagery and sound design means that I can focus on making these scenes as powerful as possible, and not be restricted to existing footage.

As a result, Sabotaging Cruelty puts the viewer into the perspective of both hunted animal and saboteur. It explains why people across the UK choose to put themselves in emotionally tough and sometimes violent situations.

The video has been widely shared and praised by hunt saboteur groups and the public. Sinclair said people’s feedback has been “completely positive” and “very supportive”. Sabotaging Cruelty is Sinclair’s first animated documentary. And he believes it has “certainly accomplished its goal” of creating a beautiful and engaging film about difficult subject matter. Furthermore, it’s unlikely to be his last:

I believe I can make some more powerful stuff in the future… I’ll certainly be occupied with my University course over the next couple of years, but I would love to create similar pieces for other animal rights subjects, as I think animation is a very powerful tool for spreading awareness about these issues. Wildlife will always be a passionate topic of mine, so I’m sure I will create more work in the future to support it.