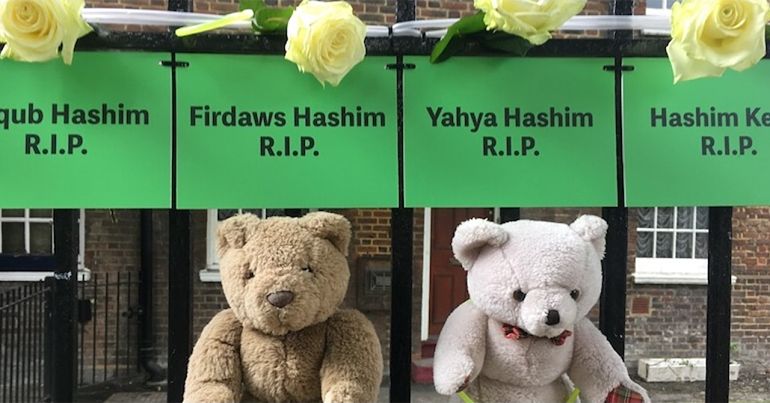 On 14 June 2017, a fire at Grenfell Tower in London killed 72 people. Two years later, bereaved families and survivors gathered to honour the memory of those lives lost. But after all this time, those same families and survivors still have no answers, and no one’s been held accountable for the tragedy. The Canary met campaigners, family members, and people from the Grenfell community. They told their stories and explained why they are still campaigning for justice. The anniversary may have passed, but it’s vital that we never forget the Grenfell tragedy.

“It could happen again”

Beeton said this was “a solemn occasion”. And as he explained, “two years down the line” there’s been no “outcome from the inquiry on the ‘what’ or the ‘why’ it happened”.

But he also warned: “It could happen again”. Because, he said:

We’ve got over 300 tower blocks around the country, still with flammable materials on the outside of them and it could happen again at any point in time.

As a firefighter, he said this is “distressing”.

Beeton doesn’t feel that the message firefighters tried to send out after the fire “has been heard”. In part, this is also down to cuts. As he explained:

A lot of fire brigades around the country have different standards of attendance and different levels of cover. And the cuts that have happened nationally… cuts to the fire services in resources and in attendance times – it’s a very, very troubling time.

He also explained that there have been significant cuts in the local area. “Knightsbridge fire station was initially a two-appliance station,” Beeton said, but “that was closed”. He continued:

Kensington fire station was a two-appliance station, and that went down to one appliance. Chelsea lost a fire appliance as well. So we’ve had a lot of cuts over the years to this area, yes.

Many significant cuts took place when Boris Johnson was London’s mayor. Beeton explained that, between 2013 and 2016, under London Safety Plan Five, “we lost ten fire stations”. He continued:

“Those were,” he said, “the biggest cuts in London’s fire brigade history”.

Two years after the tragedy, Beeton doesn’t think there’s “any kind of justice”.