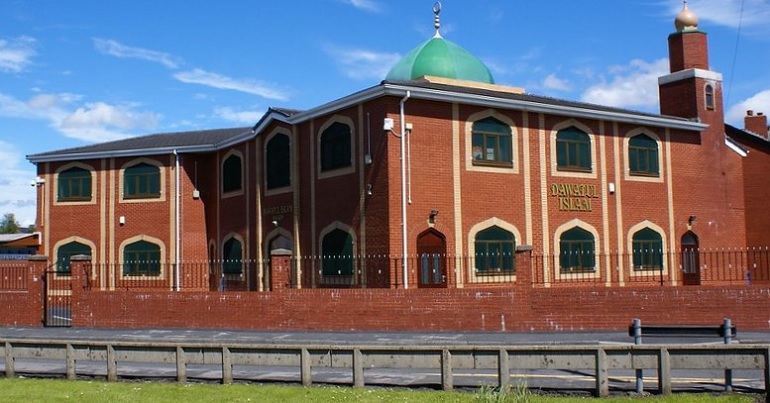 As Ramadan, the Islamic month of fasting, draws to a close, Muslims everywhere are preparing for their most significant annual celebration. Eid-al-Fitr, shortened to Eid, will likely be observed on 24/25 May by Muslims in the UK.

However, this Eid will be like no other due to the coronavirus (Covid-19) pandemic, given the celebration is usually marked with shopping, congregational prayers, and visits to family and friends.

Earlier in the week, 10 Downing Street put out promoted tweets encouraging Muslims to “Celebrate Eid at home this year and help control the virus”: 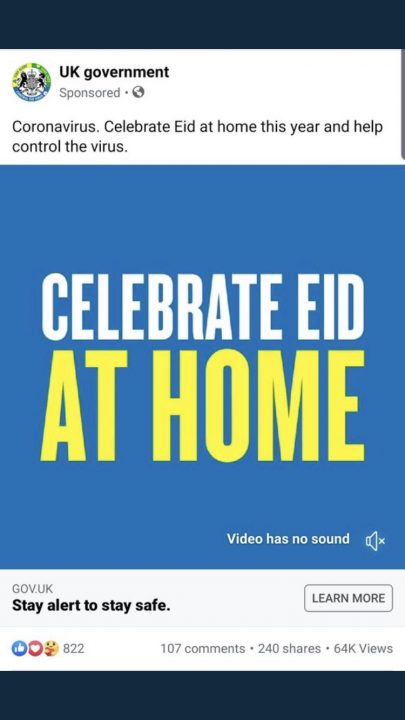 More recently, people were apparently sent texts from the NHS with more of the same:

Don’t remember getting one of these for the last Bank Holiday… or VE Day? Hmmmmmmm pic.twitter.com/0iCCjmcc63

But the double standards aren’t lost on British Muslims, who noted the absence of such messages for VE Day celebrations.

Muslims have been sharing their experiences this year using the hashtag #EidAtHome. The movement to stay home and stay safe already appears to have considerable support. The Canary spoke with some British Muslims to ask how their celebrations this year are different to previous years.

Sonya from London said normally they’d visit her uncle’s home for Eid but won’t be doing so this year. She’s put up decorations in her home, because it’s important for her to make Eid feel special for her daughter Nailah, and said:

I’m going to cook the traditional dishes that my aunts would usually – prata and chicken curry for breakfast, dalcha, fried chicken and biryani for dinner, as well as a few Malaysian sweets. Going to get Nailah dressed up, and my parents are going to come by for some socially distanced food. We’ve got a Zoom arranged with our family in Singapore for us all to share our food.

Shy, from Birmingham, has similar plans:

The plan is to be close to our loved ones from afar. Lots of video calls and maybe a garden visit keeping within social distancing. But we know the media will report us having house parties etc.

Meanwhile Shadaan, also from London, said he and his family members aren’t planning any in-person visits at all:

We’ve not left the house for weeks and we don’t plan on risking that now. The two halves of the family will be celebrating over zoom. Usually we are all together but both parts of the families in both cities have vulnerable people so we won’t risk it, both houses are staying indoors as much as possible.

Zairah from Manchester said her family would normally come together, share food, and exchange presents. They’re still planning on delivering food and gifts to one another in keeping with their tradition, but won’t be meeting in person:

This year, we all bought and posted our gifts to one another in advance and will be opening them together on a Zoom call… We will also still eat the same, as each house will distribute enough of their food to the others. The best part of Eid is all of us being together and although we’ve come up with ways to share it still, it won’t be the same and we’re quite upset about it. We did discuss breaking the rules or trying to do a garden party and keeping social distance, but there are too many of us and the risk is just too high, both for our health and because of government guidelines.

Asked how she feels about not being able to celebrate Eid as normal, Sonya said she was “absolutely gutted”; she went on to say:

It’s one of the few times a year that we all get together, and a chance for Nailah to experience the Indian Muslim side of her family (my husband is Jamaican/Nigerian). And I’m especially sad because I’m pregnant, and have not seen my family for them to [give] blessings and love for the bump.

Shy similarly feels upset about being cut off from family:

It’s pretty depressing tbh, I live in Birmingham and originally from London… This will be the first Eid where I won’t be seeing my family. BUT I would rather go through this and keep them safe than risk anything happening to them.

Zairah agreed, saying “Eid is going to suck, but we’ll all be safe”.

Shadaan emphasised ‘making the best of it’, again saying safety was the most important consideration:

It is what it is. Can only make the best of it. Risking further lives by celebrating irresponsibly is worse. Want all the people we love to be able to see the next Eid.

In terms of the general panic in British media around Muslims celebrating Eid, Shy said:

Someone will break the lockdown rules somewhere and get caught (it’s normal it will happen) but the whole religion will get tarred with it. It’s like we have to take accountability for every single Muslim.

Shadaan expressed concerns around people targeting Muslims as a result:

There are way too many warnings about Muslims not meeting for Eid. It’s a bit annoying to be honest. We at least don’t plan on leaving and can’t think of anyone who is! …

Islamophobia is on the rise and I’m worried about people targeting Muslims, including those who are staying within the guidelines.

A lot of the media messaging is making it seem like we are all having massive parties and such. I’m sure someone will take a picture of my backyard and claim we are having a party – there are 6 of us locked down together though we are a party on our own!

Sonya said someone had put a leaflet through her door encouraging street parties for VE Day. So she also felt the reporting around Eid was Islamophobic and “hypocritical”:

Islamophobia in the media (and everywhere) is just disgusting, and so hypocritical. I didn’t see any faces of colour in those pics of people celebrating VE Day, or gathered at the beaches. And interestingly, there weren’t any major warnings for people not to congregate on the hottest days of the year. In fact, I got a leaflet through the door encouraging me to have a VE Day street party with neighbours.

The Muslim Council of Britain (MCB) has issued guidance urging Muslims to spend Eid at home. In a press release, MCB said:

Muslims have shown great resolve throughout Ramadan and this pandemic, adapting to a different way of life and making the best out of the month by attending virtual iftars with friends and family, and live streaming religious services to their homes…

Whilst Eid away from the mosques and from our loved ones is unprecedented and will be a source of great sadness in communities across the country, Muslim communities will adapt and find the best way to still celebrate this holy day whilst aligning to the latest guidance.

Having spoken to Muslims who all expressed similar views, this certainly seems to be the case. This is despite the fact lockdown restrictions have officially been eased, and everyone else isn’t being held to the same standard. But regardless of what Muslims might actually be doing, this has never stopped the media from speculating and spreading panic. When the government chimes in too, that’s even worse.

Unsurprisingly, Middle East Eye reported Islamophobic comments in response to news about Muslims congregating for Eid. Among them was: “Have your party and catch the virus, will help thin the numbers”. Meanwhile, we have a prime minister who’s made numerous Islamophobic remarks, and the Equality and Human Rights Commission has refused to pursue an investigation into Islamophobia in the ruling party.

Both the government and the media fail to acknowledge how Islamophobic messages harm Muslims and create real risk in their lives. The very least they can do now is let Muslims celebrate their religious holiday in peace.