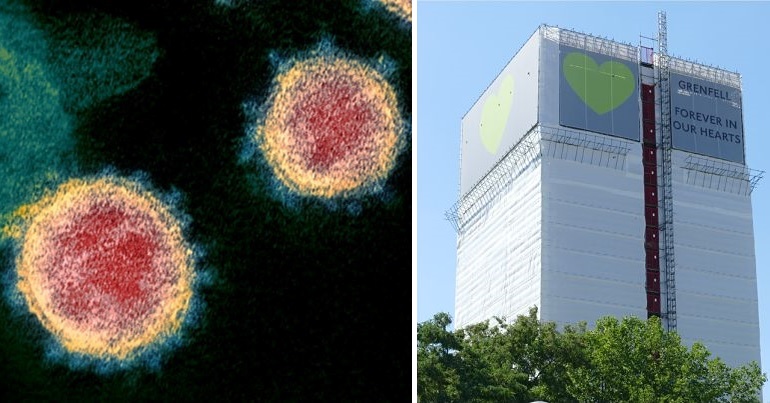 Performer Potent Whisper dedicates a new Spoken Word video to NHS staff and to a grassroots campaign to distribute protective equipment to key workers. He also reflects on the state failure that links the UK coronavirus death toll and the Grenfell Tower disaster.

In the years leading up to the fire at Grenfell Tower, the Kensington and Chelsea Tenant Management Organisation – which was responsible for the tower – received countless warnings from the resident-led Grenfell Action Group about safety risks at the tower. Residents were ignored before being threatened with legal action for expressing legitimate concerns for their safety. This silencing of terrified voices, and the apparently conscious decision not to act, ultimately led to the preventable deaths of 72 people and was followed by a shameful lack of support for survivors and bereaved family members. It is profoundly disturbing to now see this very same violent pattern of inaction being inflicted on healthcare professionals during the coronavirus (Covid-19) crisis.

For years, I have watched highly qualified and widely respected doctors speak out against the deliberate underfunding and privatisation of our NHS. Many have dedicated their lives to protecting our country’s most important institution, only to be ignored by consecutive Conservative-led governments whose ideological dismantling of the NHS – enabled through the austerity narrative – has caused untold amounts of unnecessary deaths and left our health service exposed in a way that we are now forced to view through the lens of coronavirus.

It’s abhorrent to conceive that the same healthcare professionals who have dedicated their lives to protect our NHS are the ones now dying largely because of the government’s failure to provide enough personal protective equipment (PPE) for workers.

Now with this virus, the NHS is dying

There’s doctors and nurses in coffins and hearses

And these are our friends, and we’re watching them dying

Because they’re all exposed with no protection from the virus

Because the British government has failed to supply them

There’s no masks, aprons, no gloves or visors

We’re not talking high tech, these are basic items

So why are there nurses forced to wear bin bags?!

Like Grenfell, deaths are preventable. But this time, it’s on a national scale.

In the same way that residents from the Grenfell Action Group were threatened with legal action for raising concerns about living conditions at the tower, it has been reported that NHS staff are now being threatened with disciplinary action for raising concerns about unsafe working conditions and lack of PPE. This is in my view a story not dissimilar to that of non-essential workers across society currently being forced to attend unsafe workplaces for fear of losing their jobs and income. Essentially, the government is forcing millions of people to choose between their safety and their security, often leaving us more frightened of becoming destitute than contracting the virus itself. The government’s failure to facilitate the application of its vaguely-worded and mildly-enforced lockdown rules to workplaces is a very real and ongoing threat to workers across the UK.

When NHS workers beg the government for protection, I cannot help but hear voices of residents from the Grenfell Action Group warning of danger. When I see the names of those who died in the tower, I cannot help but see the faces of these NHS workers whom the state is failing today – sometimes fatally. And as with the deaths at Grenfell, this loss of life was forewarned and preventable.

What we are witnessing now, on many levels, is the same state failure of Grenfell – but on a national scale. Ultimately, what was true then is true now: our safety has been compromised by those whose job it was to protect us, and we have no option but to save ourselves. We face this harsh acknowledgement in all areas of society; not least within the NHS, where healthcare professionals are forced to launch initiatives to protect themselves when the government will not.

Dr Lamis Latif is one of the people taking matters into their own hands. She recently founded the Anything is Better than Nothing campaign, supported by rapper and activist Lowkey, which procures PPE and materials via the public and distributes them directly to frontline workers. She told The Canary:

We understand that the government have promised deliveries of PPE, but whilst we wait for that to come through it is important to stay protected in the current climate. And that doesn’t only mean NHS staff on the frontline – it means all key workers. These are people working in care and nursing homes, transport, education and supermarket workers to name but a few. So instead of waiting for supplies to be brought in I decided to start a campaign to procure PPE to protect workers today, here and now. We are not relying on monetary donations, only physical PPE, and through the help of volunteers have been able to get this distributed out. Although I set out thinking this would only be a local campaign, it has grown exponentially by the day with key workers increasingly reaching out and asking for help in the way of PPE. I know this is only a temporary fix, but as the campaign goes – Anything Is Better Than Nothing.

As a Spoken Word artist, I recognise an ability and duty to amplify key information from grassroots campaigns such as Anything is Better than Nothing. For this reason, I produced the video Doctors and Hearses, which I hope will go some way to promoting this important and urgent initiative.

They’ve put a public call out, a call for all equipment

And there’s no time to waste, they’ll take whatever we can give them

This needs to be our mission, we can put the ‘great’ in Britain

Cos if Boris won’t, then we’ll have to show them that we’re with them

So for everybody watching now, stop and ask yourself:

Do you have access to items that could help?

Do you own a shop with this equipment on the shelf?

Or do you have materials for them to make themselves?

If you have equipment, you can make a massive difference

They’re ready to collect it, if you just click the link

It’s not an ultimate solution, but we don’t have an option

Once again, it’s up to all of us to fix the problem

1. If you have personal protective equipment, or materials that can be used to make it, please message the Coronavirus Frontline. They will arrange for your items to be collected and distributed directly to key workers: