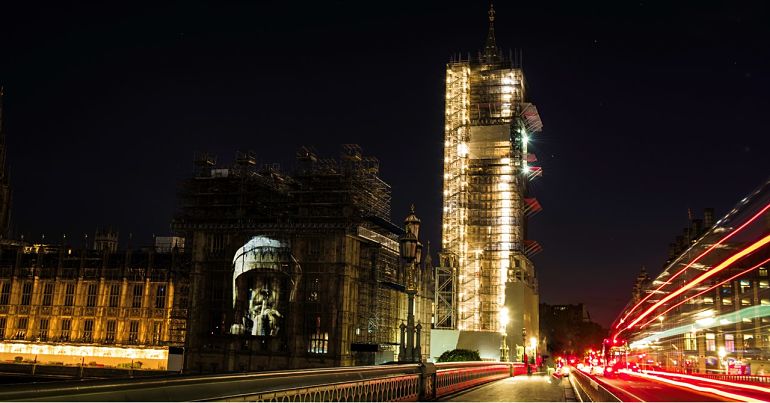 UPDATE: This article was amended at 10.45am on 16 June to clarify the roles of the groups involved and add some additional detail on the action in Santiago.

Guerrilla artists and activists have used iconic buildings in central London as their canvasses. On Saturday evening, they projected an image of a riot police officer in a helmet with his index finger pressed against his lips. A member of independent art curators a/political explained to The Canary that their work seeks to highlight artistic projects which might otherwise not see the light of day.

The Canary was present for the projections at the Houses of Parliament and the Royal Courts of Justice, which were designed and created by Democracia, a Spanish-based anti-authoritarian “agit-prop” and artistic collective. As part of the project, the collaboration secured a van with a giant electronic billboard to drive around the capital, displaying the words “Enjoy the Collapse”. 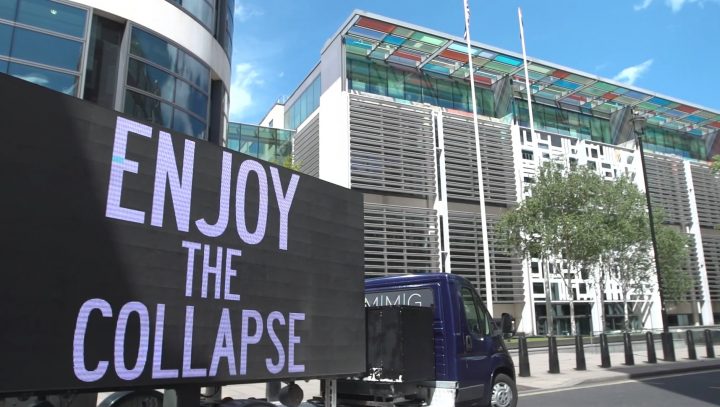 After the sun set, a/political, with technical assistance from Media Gang, proceeded to the next stage of their activities by projecting the image of a riot copper onto the Houses of Parliament. Only a few minutes passed before a police boat approached the team via the River Thames and instructed the artists to cease their activities. Officers from a police car took down the details of every one of the group. The police action was “something that had never happened before”, a member of the production team told The Canary. 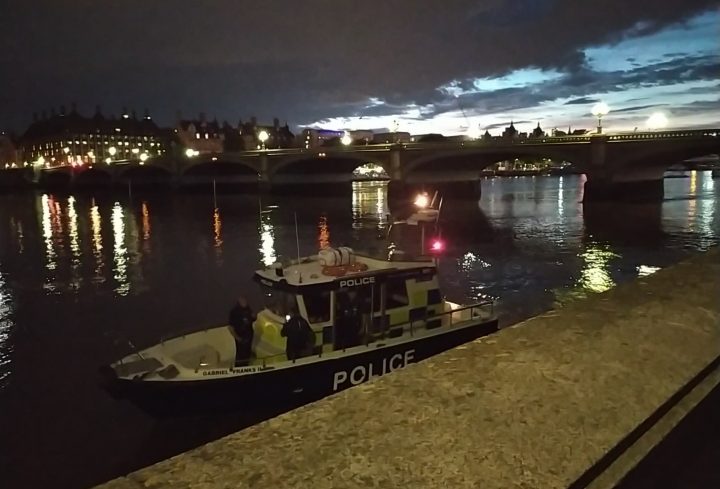 Similarly, when the group projected an image onto the Bank of England, The Canary understands that City of London police, as well as the same police officers from the car at Westminster, shut them down for the night. The a/political member, who prefers to remain anonymous so as not to detract from the collective nature of the group, explained to The Canary why London is an important site in which to carry out politically inspired art.

The Canary also interviewed Democracia, who designed the image of the riot copper, about the nature of their work, agit-prop and their latest London-based collaboration with a/political.

Explain the image being projected.

“It’s a riot police officer who asks [for] silence. This is a gesture that we saw in a demonstration in Spain and that we consider paradigmatic of the repressive function of the police in the face of legitimate demands from different communities or social movements. It’s an image that explains itself belonging to a wider work corpus we started with “Working Class” sculpture.”

Why are you projecting these images?

“Our intention would have to do with what has traditionally been understood as agit-prop at a time when control and repression have increased globally. This image has also been present in other contexts and places like Houston, Rome, Madrid, also in scenes of revolt like in the streets of Santiago de Chile during the popular confrontations against the government.”

“Democracia is an artistic collective formed in Madrid in 2006. Although it is made up of a permanent hard core… it is also composed of many other people who regularly or occasionally become part of it.

“The decision to work as a group springs from the intention of engaging in an artistic practice centered on discussion and on the clash of ideas and forms of action. The fact of working in a group establishes in itself an interest for intervening in the social sphere. In this sense Democracia works as a node of interests grouped temporarily for the development of the same objective.”

What does “enjoy the collapse” mean exactly?

” “Enjoy the Collapse” can be interpreted at various levels. On the one hand the impotence of the citizen in the face of events over which he or she has no capacity for action. On the other hand it alludes to accelerationism in the sense that only a collapse that generates a profound crisis can change the structure of the global system and provoke the transition towards a new productive, economic and social model.”

“Then you can “Enjoy the collapse” in a passive way, as a mere spectator, or in an active way by defining what kind of different society can develop from the collapse (energetic, economic, environmental, social) that we are facing”.

What other kinds of projects have you done?

“Basically we have developed projects of artistic action in public space as forms of direct action or more reflexive and aesthetic projects that find their platform of diffusion in the art system. We can say that the projects we work on would have to do with agit-prop (the classic agitation and propaganda, consisting of the diffusion of a message), the “construction of situations” that interfere with everyday reality and direct action when our projects are put at the service of a specific political or social movement with the will to help a concrete struggle.

“Some examples: recently we participated in an action in Santiago de Chile, in which a limousine labelled “Eat the Rich” and occupied by hooded protesters from the front line, drove through the high neighbourhoods of Santiago throwing out propaganda against the Chilean government, again using the phrase “Enjoy The Collapse”. Or in the organisation of a demonstration with the new Black Panthers in Houston through the use of poetry and political slogans. Besides, we have also collaborated with anti-fascist football ultras in the generation of merchandising and animations such as the Ultramarines de Bordeaux or Los Panzers de Valparaiso. However, you can visit our website www.democracia.com.es to get more detailed information”.

Where do you go next from here?

“Who knows. The best struggle is the one that is hopeless.”

The picture of the police boat is via Mohamed Elmaazi, all other pictures in this article and the featured image via Nick Beard, Courtesy of Democracia and a/political