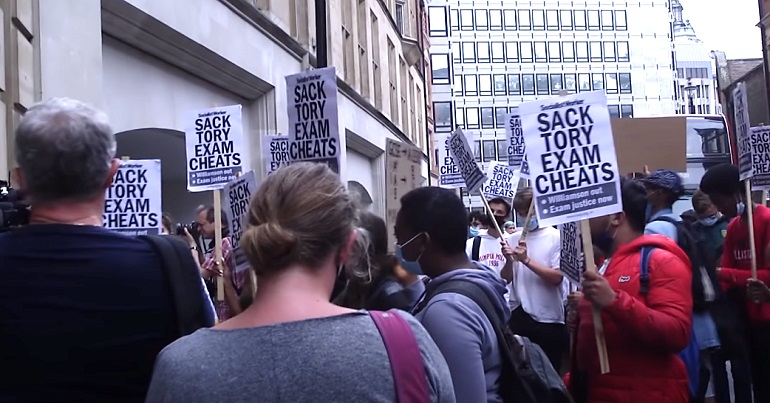 Amid the ongoing catastrophe of this year’s A-level and GCSE exam results, the government has left one cohort of students in an impossible situation. What’s more, many in this group have been left with no grades at all. This means they may have to resit the entire year, or retake their exams.

The Canary has extensively reported on the A-level crisis. As it reported on 19 August, education secretary Gavin Williamson:

is under intense pressure after he was forced to abandon the algorithm-based system for awarding A-level and GCSE grades in England.

The U-turn came too late for thousands of A-level students who have already made choices about universities based on the grades they were initially awarded, rather than the new system of using teachers’ assessments.

GCSE students will receive their grades on Thursday.

But amid this, the government has dramatically failed to adequately address the situation for so-called “private” A-level students.

The Twitter account JUSTICE 4 RESIT STUDENTS posted a thread which summed up the situation well. It wrote:

Who are private candidates?

They are students who have decided to resit the year because they wanted to improve their grades. They are home schooled students who haven’t had the opportunity to sit any exams. They can also be first time exam sitters.

What makes them different to ‘normal’ a-level students?

Most aren’t aligned with a sixth form or college like internal students. They sign up with a centre and study at home with / without a tutor until they take their exams at said centre.

So, the A-level crisis has left private students in an impossible situation. As JUSTICE 4 RESIT STUDENTS wrote:

What happened to private candidates during the A-level crisis?

[The] majority have been told they will not receive any grades and will have to take the autumn or summer exams. This means they will be forced to retake ANOTHER year and are two years behind the usual academic progression.

Several private A-level students spoke to The Canary. We have decided to keep their identities anonymous. You can also read more students’ stories here. One, whom we’ll call ‘Student A’, told us:

I’m a resit student who wanted to retake two subjects from my 2019 A-levels. I applied with an exam centre that I found last October and have been studying and revising so much that I’ve actually now… gotten headaches from staying up so late studying. I also had one of my old teachers predict my UCAS grades for me and have been working towards and above that for inspiration.

With the news of the exam cancellations, I was scared but thought that it would be okay as there must be a plan for students like me, right? I learned the hard way. It took months for us to even get a mention let alone a detailed statement on what would’ve happened to us. And when that happened, normal working class students like me were told to pay up thousands just to transfer to other centres to get CAGs [centre assessment grades] a week or two before the deadline. I begged and begged my old college, pretty much every other college near me and even my GCSE school to take me on and predict me CAGs but was denied brutally.

Another, ‘Student B’, told The Canary:

Many external candidates such as myself have been downgraded by the flawed moderated grades which had resulted in me being rejected from my firm offer that I have worked so hard to attain… CAGs have been given by my centre – based off my previous [exam] sitting. I was given those grades, took a year out to improve on the basis that the centre lacks up-to-date evidence regarding my academic performance as I am an external student…

l had intended to improve and worked so hard during my gap year to ensure I attained my predicted grades (AAA) at a minimum. Instead my options are left restricted due to CAGs that are based on the success / lack of success of previous performances of externals at the centre. Therefore, my grades remain the very grades that prompted me to take a gap year solely to improve my academic performance and successfully achieve my firm offer in 2020.

Meanwhile, ‘student C’ has written an open letter to their college, Williamson, and Ofqual:

Second time applying for Medicine, got a great UCAT score of 680 avg, 4 interviews, & 3 Offers – all to end up with nothing!

They say they feel “neglected, forgotten and abandoned by the education system”. In the letter, they also wrote:

Unfortunately, I didn’t get in the first time round and decided to take a gap year and retake / resit a subject so that I could improve my grades and also reapply to medicine. Taking a gap year was emotionally troubling and deeply stressful, knowing my friends and colleagues would surpass me and progress while I had to go through the entire process again. It required a great deal of resilience, persistence, and motivation to carry on despite this setback, but not without it taking a toll on my mental and physical health as part of it.

As with many A-level pupils in the past week, it’s the personal toll the experience is taking on these students which may be hardest to bear. Because for them, the situation has been brewing since earlier in 2020.

The government can “continuously ignore us”

Student A told The Canary:

Honestly, it took a huge toll on my mental health and I was in a state of depression for months. The thing is that I want to go to university this year. I am the first generation in my family going to uni and this is a pressure that me and so many people in my situation carry.

The government has done all it can to continuously ignore us because quite literally they can. We’re not big enough or known enough to make headlines or cause trouble to force the government and Ofqual to do what’s right here.

What hurts the most is that I’m already a minority in race, gender, religion and class. Education is the only way for me to succeed and make my way out of the burdens I already face. Getting the rightful A-levels I deserve, and being accepted by my firm University, is what will help me climb the social mobility ladder.

Meanwhile, student B echoed this sentiment:

As a result of such a lazy, inconsiderate and unjust standardised approach, external candidates such as myself had lost our offers to our dream courses and universities that we have sacrificed time, money and most importantly dedication… to achieve… through retakes we had paid to sit in our gap year. I simply cannot afford and do not deserve to take another gap year and be two years behind in my studies – based off decisions that have not been brought upon me by actions of my own. If I had under-performed after taking the 2020 exams, I’d accept the need to settle for less. But that was not the case.

I have worked so hard to be the first in my family to not only go to university but to study at my first choice university; studying my dream course. I will not settle for less based off of CAGs that do not reliably reflect my ability as an individual who has taken a gap year to acquire further knowledge and skills. Please recognise our concern and help us have our rights as students recognised.

Now, being told that I have to do this entire process yet again for a third time (taking another entire year out – a second gap year) is extremely troubling and anxiety-inducing. I don’t want to miss out pursuing my dreams of studying medicine because of something out of my control (the cancellation of exams due to the pandemic). The reason that I initially took a year out to retake / resit is because I know that medicine is what I am truly passionate about.

The Canary asked the Department for Education for comment. We specifically wanted to know whether or not it has any plans to look at the situation for private students, and why it hasn’t addressed the issue thus far. But the department did not respond in time for publication.

It seems unfathomable that an entire cohort of students, through no fault of their own, could be treated like this by the government. What also stands out from the three students’ comments is that they all feel at a disadvantage already, whether that be due to class, ethnicity or circumstances. Moreover, all seem determined to make successes of their lives – the very kind of attitude you’d think the government would want to encourage. But it’s paying little attention to the educational and emotional wellbeing of these students. The situation also reeks of the same institutional racism and classism that has infected the country’s education system for years. And unless something changes quickly, many people could be affected for the rest of their lives.