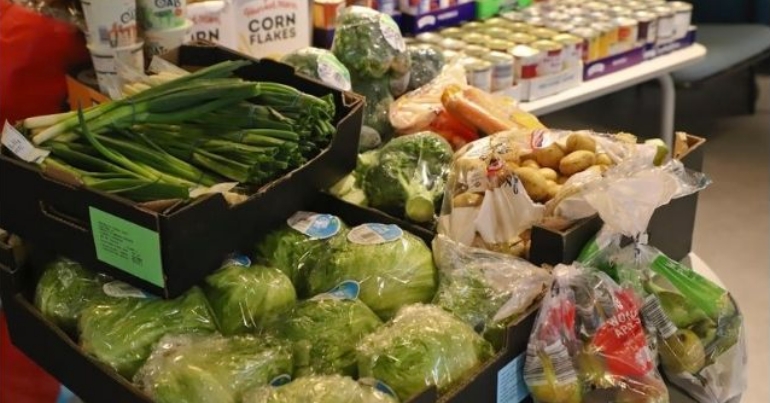 March is being commemorated as Women’s History Month, and The Canary has featured the important work of Black women such as climate activist Wawa Gatheru and dementia expert Rianna Patterson.

In the same vein, we recently spoke to Maia Thomas, a 22-year-old equality activist based in Exeter, Devon. Thomas has spent 2021 tackling food poverty. Her campaigning strives to fulfil a critical need which the local council and government are failing to properly address.

On 17 January, Thomas started up the grassroots project called Feed Our Community. The project aims to reduce food poverty and food waste in the local area. Through working with supermarkets and volunteers, the initiative puts together essential food packages before distributing and delivering them to anyone who’s struggling. This includes those from low income households, people who are on furlough, and anyone in emergency situations.

It’s as simple as dropping them a message. There are no questions asked or lengthy proof of income requests, and it operates as a helping hand to those in need.

I started this up with around £3,000 of my own money. I had hundreds of people waiting [for food packages] in the first week. Then I started a GoFundMe which has raised over £9,000 with all proceeds going towards food and other costs involved with the projects. Everyone that helps to deliver, and pack food packages do it for free.

In just 8 weeks, over 2,900 households across Devon received free food packages. And to help people break out of the poverty cycle, the project also provides access to free Zoom calls on “household and financial management, meal preparation and smart ways to shop”. It also helps with emergency top ups for gas and electricity.

New Government figures have revealed that a massive 37,485 children in Devon were living below the breadline in March 2019. This was even before the cost of housing was taken into account.

The overall number means that around one in every seven children in Devon is living in poverty (15%) – although that figure is higher in some areas than others.

Before the coronavirus (Covid-19) pandemic, many were already struggling to stay afloat and afford basic necessities. Now, the heath crisis has heightened the problem.

Devon’s level of food insecurity has risen over the past 12 months, with rates of over 20% in Mid Devon, North Devon, and Teignbridge. The scheme will mean almost 16,000 food vouchers will be distributed to those families in need and that qualify.

“It’s a crazy amount of pressure”

That’s the equivalent of “nine in a classroom of 30”.

Poverty has always been an issue. And although measures have been put in place to ease the impact of the pandemic, they’re not enough. For instance, problems still arise with support outside of holiday periods. And these schemes only target families with children who are eligible for free school meals. But there are many more people living below the poverty line, facing all kinds of hardship, who are also struggling to make ends meet.

What about after Easter? It’s a crazy amount of pressure because if I stop and the other food groups [charities] stop then we take on the guilt of people not eating. Whenever the GoFundMe runs out, I end up putting my own money into it when really it’s not solely my responsibility to feed Devon.

In September, according to research from The Trussell Trust:

But has it been turned around at all? Thomas said:

Food Banks often have a lot of red tape involved in partnering with them which can take a long time to process.

Thomas also talked about how she has tried to help those struggling to access food banks:

I help a lot of people from different ethnic minority backgrounds. Some have told me that in their culture it is so shameful to ask for help that they would rather go without. Breaking down the barrier and shame associated with asking for help is particularly important to me.

She went on to add:

One family I am helping has suffered in silence for years. English is not their first language and they struggle understanding a lot of systems and processes we have with food banks. They told me in the past when trying to contact the council they have had the phone hung up on them as they could not understand the person they were speaking to. Now I have helped them with funding applications, they are moving into a new home and are supported with food packages.

The UK government barely scratches the surface with its current initiatives to help families with children. And if the rampant poverty Marcus Rashford highlighted during the first wave of the pandemic wasn’t enough to show this country has a real problem with food insecurity, what will it take?’

An Open Letter to all MPs in Parliament…#maketheUturn

Each year people waste almost a billion tonnes of food

That’s almost a billion tonnes a year. Like Rashford, the Feed Our Community campaign is partnered with FareShare which redistributes “surplus food to charities that turn it into meals”. Thomas said:

Food poverty and food waste come hand in hand. Everyone should have access to fresh produce to make healthy meals, fresh fruit and vegetables. Alongside this – tinned meats, fish, pasta, rice, soups, breakfast items, toiletries and other essential items. Those needing food packages are always asked if they have any dietary requirements in advance to ensure they are as beneficial as possible to those who receive them.

“A blessing in disguise”

Thomas is a campaigner for several other organisations such as BLM Exeter Movement and Keep Devon Safe. She also works part-time in retail and is studying at university. But despite juggling many commitments and bearing the effects of the pandemic herself, she felt compelled to act. She said:

Lockdown for me has been a blessing in disguise, it has allowed me the time to do important work to help my community. When you know the difference is between someone being able to eat and not, you make time for it.

Last week, Thomas was granted the Ron Todd award for her equality work and for founding Feed Our Community. In future she plans to expand all the initiatives across the South West, collaborate with various charities and wellness groups, and push for government action. She’s an inspiration to all, and proof that no matter how small an idea, with the determination to create change anyone can make an impact.

You can donate to the project here.