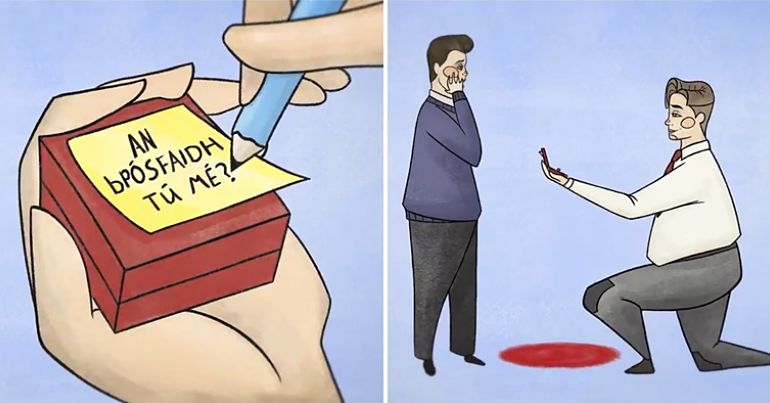 Earlier this week, the first ever Irish language pre-school (Naíscoil na Seolta) in loyalist east Belfast was forced to look for new premises. The cross-community school was to open at its original site in September. But following an online campaign of abuse, it had to change location. A school statement said:

Due to an ongoing social media hate campaign against some individuals and the integrated Naiscoil na Seolta, it is with great sadness that it is choosing to relocate to an alternative location.

The school premises in this area was only ever meant to be temporary, but the search for a new home had to be fast-tracked. The school said that the hate campaign:

was started and fuelled by those who are not connected to the school, nor are parents of our school and who are clearly not interested in facts and truth

But amidst all this, a heart-warming animation showed the need for places like Naíscoil na Seolta, and why fighting for its survival is so vital. Later in that week, the Turas project released a video entitled LGBTQIA+ Irish language love story:

Thrilled to share Chris' LGBTQIA+ Irish language love story. Third in our series, 'Ulster Gaeilge: It's Yours Too!'

Chris had no Irish a few years ago. But it came to shape the most important moment of their life ❤️

The protagonist of this animation Chris Moore asks:

How does someone go from having no knowledge of Irish, to proposing to their wife in Irish? This is what happened to Chris Moore, a gay Irish language enthusiast who, until a few years ago, didn’t have a word of the language.

My upbringing would have been staunchly Protestant. I was from the wrong side of the tracks to learn Irish. I shouldn’t have been anywhere near it.

Moore says they had always been interested in the Irish language. And when they heard about Irish language classes at Turas in east Belfast, they plucked up the courage to enroll. In the animation, they connect:

But Moore got a lot more from the language than that feeling. Because it gave them a way to propose marriage to their partner. They asked their friends how to say “will you marry me?” in Irish. To know their partner’s response, you’ll just have to watch the video.

It meant everything to me to be able to propose to my wife in Irish. It meant more for me to ask her in Irish than to ask her in English because it was like marrying the two sides of me.

I can’t separate being Irish from being gay. And for the two of them to fit, means I’m home, I’m safe and I’m happy.

Moore’s story was launched to coincide with Belfast Pride. And her animation, along with others, tells “the stories of the many diverse learners at Turas”.

Linda Ervine of Turas, who is also one of those behind the Irish language pre-school, said:

I love Chris’ description of the cosy jumper and feeling at home. I’m delighted that Turas has been able to create such a welcoming space. Chris is a fantastic learner, and we are thrilled to have played a small part in their wedding journey.

It also comes at the end of a week when so much disgusting hate was expressed online. Moore’s animation is the perfect response.