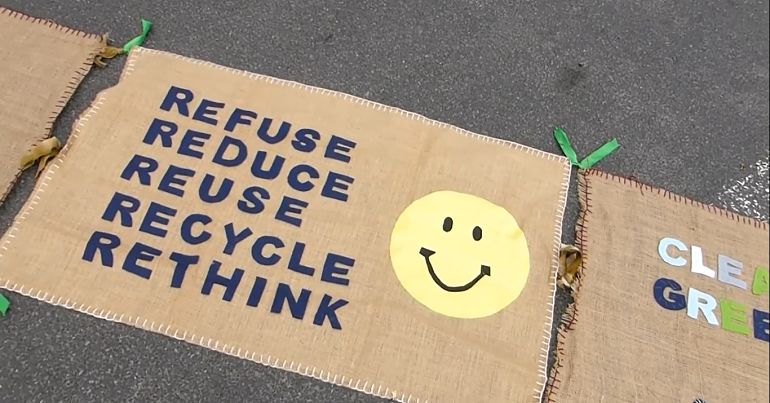 As reported by The Canary, young people opposed to the Cambo North Sea oilfield confronted Scotland’s first minister Nicola Sturgeon in Glasgow. However, as Sturgeon pointed out, aspects of energy regulation aren’t devolved to Scotland. So whether Cambo gets the green light or not is ultimately up to the Tory government in Westminster.

Yet despite the current climate crisis, a warning from the International Energy Agency against any more fossil fuel projects, and widespread opposition, the UK government appears set to approve the Cambo project.

But opposition to Cambo is likely to increase as we approach COP26, the UN climate change conference. In the lead up to the conference, which takes places in Glasgow from 31 October to 12 November 2021, another campaign group is making itself heard. And this weekend it took its powerful message to the Edinburgh fringe festival.

Stitches For Survival is:

a group of knitters, crocheters, stitchers and crafters from across the UK and beyond with a heart-felt message to the COP26 climate talks

It is time to put the Earth — the basis for our very survival — and not money, centre stage in political decisions. This is the time to take bold and binding action to stop the devastating climate havoc and ecological breakdown that is evident across the world.

The group took that message to the streets of Edinburgh this weekend:

Come and see some of our amazing panels for #COP26 at @Venue40 until Monday #ClimateCrisis #ClimateEmergency #ClimateAction #edfringe2021 pic.twitter.com/bj3YyubuL3

How it all started

We are knitting, crocheting, stitching and crafting 1.5 miles of climate messages for the negotiators to urge them to take bold and binding action together. Mass-craftivism to put the Earth centre-stage at COP26!

The length of the scarf represents the 1.5°C target in the Paris Agreement.

The Stitches For Survival scarf will be used for campaigning locally and nationally in the lead up to COP26. During the conference we will display it near the SECC conference centre where the talks are taking place.

After COP26 the scarf will be repurposed into blankets for refugee communities. Some of the more creative sections will be kept for an exhibition, and be used for ongoing campaigning.

The group has posted several examples of its work online:

Counting the weeks until all the wonderful panels will tell #COP26 leaders to lead 👇
Check out https://t.co/3MtUJ72tou if you've got a message to them 💚 #ClimateCrisis #ClimateEmergency #ClimateAction #Biodiversity pic.twitter.com/mp6NvuOD2l

We're not a Fringe Venue in our usual, indoor sense this year, but we're celebrating #EdFringe2021 with 3 special events. First up, @StitchesFor – fantastic craftivism for the planet, outside the Meeting House Aug 6-9, 11am-4pm #COP26Glasgow #quakers #craftivism More news soon! pic.twitter.com/YgbR3f8o3N

Wanting to see some more of our amazing panels? It's a trick question – of course you do! 👇 from the great Craftily Connected pic.twitter.com/wcI6IfSQTx

Stitches for Survival aims to use the assembled scarf to send important environmental messages and demand proper action on the environment. Such action would mean phasing out fossil fuels, creating a system that puts wellbeing ahead of profit, and legal protection for the planet.

Prime minister Boris Johnson is apparently hoping to make a big impression at the COP26 summit. But that appears to be more about his own personal image than the environment. And given even his summit spokesperson doesn’t think the Tories can do much about saving the planet, it would be hard to believe Johnson will take Stitches for Survival’s message on board.

But campaign groups can generate a lot of public pressure. And in doing that, Stitches for Survival could counter the climate crisis-denying nonsense of Cambo’s supporters. The next step would be to close it down all together. Let’s hope that message gets through, and this climate summit doesn’t become a COP out.