Lowkey is back speaking 'truth to power' - Canary 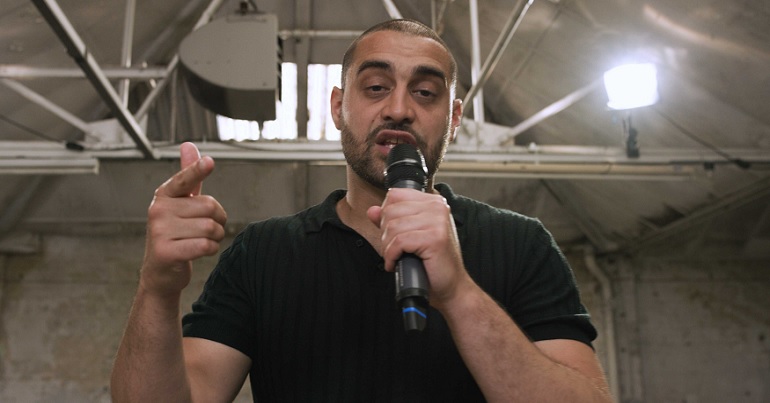 Musician, historian, and activist Lowkey has never been afraid to speak ‘truth to power’. Now, he’s taking it to the next level: launching an online show. And it promises to bring important stories to people that need to hear them.

Lowkey rose to prominence over a decade ago with the release of his first album Dear Listener. A British-Iraqi born in London, he was rapping from an early age, and Dear Listener and its follow up Soundtrack to the Struggle propelled him onto a worldwide stage. Following that, he played festivals and concerts both in the UK and around the world. After a hiatus to complete a degree, he returned to music. His album Soundtrack to the Struggle 2 had the huge tracks Ghosts of Grenfell and The Return of Lowkey. Now, he’s back with a brand-new show.

Truth to Power is a new online show. It’s a joint project between Lowkey and radical art organisation a/political and their new music label. The show is a fortnightly interview series being released on a/political’s YouTube channel. It said in a press release that:

Giving creative space to independent thinkers, a/political looks to speak to an ever-increasing politically engaged youth in a way that hasn’t been done before, where ideas are allowed to be freely expressed outside of a mainstream narrative.

Upcoming interviews include Pink Floyd frontman Roger Waters. Lowkey will also be speaking to Palestinian activist and former child prisoner Ahed Tamimi and independent journalist and author Matt Kennard. Lowkey will speak with Marcia Rigg too – the sister of Sean Rigg who died in police custody in London.

In the first episode, Lowkey spoke to Stella Moris.

Morris is the partner of imprisoned journalist Julian Assange. As The Canary‘s Pablo Navarrete wrote:

WikiLeaks founder and journalist Julian Assange faces a possible sentence of 175 years in prison if he’s extradited to the US from the UK. Famous for the work of WikiLeaks in exposing US war crimes among other things, Assange is… one of the world’s most prominent political prisoners

On Wednesday 11 August, Assange was subject to another court hearing. The US is appealing a UK court ruling that said the government couldn’t extradite Assange. Despite the ruling that he couldn’t be extradited, Assange is still in prison. As campaign director of Reporters Without Borders Rebecca Vincent tweeted:

Today at 10:30 am the UK High Court will begin to consider the US government’s appeal against the court decision opposing @wikileaks publisher Julian Assange’s extradition to the US. I’ll be in court monitoring for @RSF_inter and will have updates on this thread. #FreeAssange pic.twitter.com/J8HH1NQx8q

In a wide ranging interview with Lowkey, Moris talks about Assange’s story. She discusses a discredited key witness in the case who is also a convicted child sex offender. Moris calls them:

a fraudster who was already convicted of embezzling Wikileaks for 50 or 60 thousand… The key allegations against Julian have been fabricated by him… He admits he did that in exchange for total immunity.

“The most significant press freedom case of our century”

the most significant press freedom case of our century which raises the most fundamental issues about what it means to live in a democracy, about our ability to know what governments do in our name, with our money.

So, with just one episode under its belt, Truth to Power is already proving to be a must-watch show.

To the disillusioned: Lowkey is working for you

As Lowkey sums up:

To those feeling deeply disillusioned and disenchanted I would say there are powerful people that seek to demobilise you and depoliticise you. We aim to [do] the opposite. In a time when there seems to be a massive discord between the political discourse and the public discourse, we will be looking at issues which genuinely matter to people.

Truth to Power looks really promising. Lowkey has a way of being able to relay complex messages to people from all walks of life. And his new show will hopefully reach an audience that will benefit from this.