We all need to protest racist Tory legislation this weekend - Canary 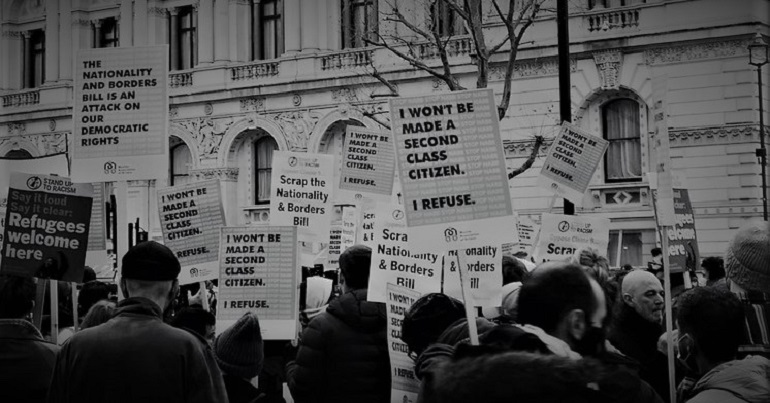 THIS ARTICLE WAS UPDATED AT 1:30PM ON WEDNESDAY 23 FEBRUARY TO CORRECT AN ERROR. IT PREVIOUSLY SHOWED AN INCORRECT ROUTE FOR THE MARCH.

A newly-formed campaign has organised a demo over a racist piece of Tory legislation. It will see numerous organisations working together to oppose the government’s Nationality and Borders Bill. With up to six million people possibly affected by the new law, the protest is sorely needed.

So ahead of the bill’s next reading in the lords on 28 February, the group has called a protest in London on Sunday. It is also highlighting and opposing the Police, Crime, Sentencing and Courts Bill which is also back in the House of Commons on Monday.

As I previously wrote, the Tories’ Nationality and Borders Bill is a:

nasty piece of legislation [that] aims to make it even harder for refugees to try and seek help and safety in the UK – trashing international law in the process. The bill will criminalise refugees and stop them arriving in small boats – including measures to let border control staff do so-called ‘pushback’ techniques which puts refugees at risk of drowning. It will also let the government strip people of their UK citizenship without even telling them. This would include people of Indian, Bangladeshi and Jamaican heritage.

The bill is overall inherently racist. So, a campaign group is taking action.

Our right to citizenship

Citizenship Is A Right (CIAR) is a new coalition, formed of various groups. Groups involved include:

The coalition says that:

We believe in a fair, humane and caring immigration policy, and unequivocally reject the Hostile environment – driven by racism, hatred, greed and open contempt for international law.

CIAR notes that the two bills:

are a continuation of a full-scale assault on the lives of so many. We call on everyone to rise for justice to defend our already fragile democracy and basic rights – and join us in our fight to defeat them.

As CIAR points out, currently UK law already allows governments to strip people of their citizenship. These bits of legislation date back as far as 1981. CIAR says that updates in 2014 allowed:

the Home Office to remove a naturalised citizen’s citizenship as long as they have “reasonable grounds” for believing the person has a right to citizenship of another country. This could render them stateless – and for some already has.

Now, it’s getting even worse. As CIAR notes, if the Tories make the Nationality and Borders Bill law:

Every person with foreign-born parents is under threat. Shockingly, this Bill would also give this Government the power to introduce primary immigration legislation without parliamentary scrutiny, known as the Henry VIII clauses. This is wholly undemocratic and immoral and this is what we are campaigning to end.

That’s six million people who CIAR refer to as being “under threat”. So, on 27 February, CIAR is taking to the streets.

The group has organised a demo from the Home Office to Parliament Square. CIAR says that:

we’re taking to the streets to make some noise and put pressure on the House of Lords to kill this bill which will strip dual citizens of their British passport without notice and criminalise refugees.

Other protests against the bills are being organised across the UK using the hashtags #KillTheBills and #DefendDemocracy, #CitizenshipIsARight and #RefugeesWelcome.

Zita Holbourne is the national chair of BARAC UK. She told The Canary:

BARAC UK has been campaigning for migrant and refugee rights since we were established in 2010. This includes warning of, and then in opposition to, the Windrush scandal and mass deportations. We also believe in practical solidarity. So, for the past eight years have organised regular humanitarian aid missions to support refugees stuck in limbo in northern France.

The [Nationality and Borders Bill] seeks to further reduce the rights of all these groups of people and many more.

BARAC UK is working with a number of groups to campaign against it. We are one of the 21 co-founding organisations of CIAR who have organised the demo on Sunday. This is our second one since forming in January.

Up to six million overwhelmingly Black and Brown people could have their citizenship stripped under the bill proposals. It seeks to create another Windrush scandal on an even larger scale.

So it’s imperative that we mobilise, organise and take action against it with urgency.

These bills reinforce attempts to undermine rights and liberties that are widely taken for granted in a liberal “free” society. Their full implications may not become visible immediately, or even under this government. They should be seen in the context of others already on the statute books, such as the Covert Human Intelligence Sources Act, enacted in March 2021, anti-trade union legislation in force since the 1980s, and other ongoing threats such as the silencing of pro-Palestinian voices through imposition of the IHRA [International Holocaust Remembrance Alliance] definition of antisemitism and the criminalisation of calls for BDS [Boycott, Divestment, Sanctions].

These bills will almost certainly pass into law, given the Tories’ huge parliamentary majority. Mobilisation in advance is vital to alert vulnerable communities to their potential impact and prepare for the battles ahead.

The Tories are currently attacking many of us on all fronts. But it’s the sheer scale of the assault of the Nationality and Borders Bill that is so shocking. With six million people potentially in the Tories’ line of fire over revoking citizenship alone, that’s around one in 11 people. Therefore, many of us will either be or will know someone personally affected by this. So – it’s each and every one of our duties to oppose this nasty, racist legislation.

See you on the streets on 27 February.