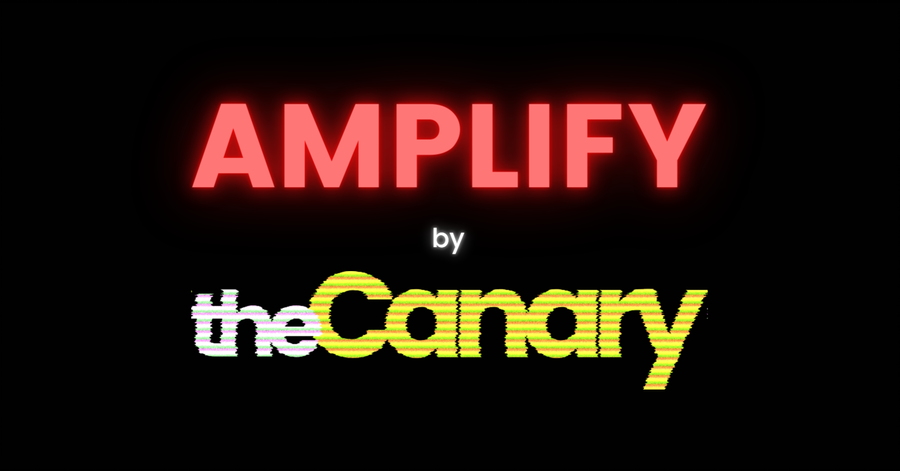 How often do you watch or read the news and think ‘what a load of shit’; ‘that’s not how it is’, or ‘why aren’t they telling the truth?’ At The Canary, we know how you feel. That’s why we’ve launched a new project called Amplify.

We’ve spent the last six years fighting the system to try and make the world work for everyone – not just for politicians and their mates. We’ve been arrested for our activism, had the government refuse to talk to us, and we think we’re on a ‘list’ at the Met. The government says some of our journalists are ‘domestic extremists’. We’ve pissed the establishment off, and that’s a good thing – right?

We’re lucky to be able to do this. Because the majority of the people who work at The Canary are from poorer backgrounds. Some of us grew up or currently live on council estates. We’ve been on benefits. Some of us have been addicts. Others are sick and disabled. Many of us are from minority groups. Most of us don’t have degrees in journalism.

But we’re not the norm in the media.

75% of all UK journalists come from middle-and upper-class families. 92% of them are white. Nearly all of them have degrees. It’s no wonder then that the rest of us feel like the media doesn’t really speak for us – partly because just 8% of journalists come from the poorest backgrounds. It’s a similar problem for young journalists, with 67% of media roles going to the over-25s – compared to 57% in all other professions.

So, if you want to get into journalism, then you have to come from a certain background – or be able to do an internship where you work for free for a billionaire.

That’s not fair. And The Canary wants to change things.

So, we’ve launched Amplify: a training and mentoring programme in media and journalism. The first round ran from January-March 2022, with 13 working-class, 16-25-year-olds. They all completed the programme on 13 March 2022. We’re beginning to publish their work now, which you can find here.

Now, we’re recruiting for round two. It will run between April and June 2022. And this time, not only will it be open to young, working-class people aged 16-25 but specifically for chronically ill and disabled people who are not in paid work. We really want to encourage disabled people of colour to send us an application.

You’ll link up with one of our journalists who’ll be your mentor for the next few months. You’ll take part in Zoom workshops on article writing and filmmaking. Then, with the support of your mentor, you’ll produce a piece of work that The Canary will publish – and pay you for, obviously.

You could produce an article like Eileanor Crilly, an Amplify round one participant, did:

Dying to get treatment, part one: eating disorder services fail to save lives

Or maybe you want to do a film – like this, where I met legendary film director Ken Loach:

If you’re interested, the first and most important thing is that this is about you being you. The Canary doesn’t exist to tell you what to talk about or how to talk about it. We want you to produce work about stuff that’s important to you: racism, police violence, benefits, being poor, the climate crisis – anything you feel passionate about or that affects you.

Second, this is not about turning you into a particular kind of journalist. This is about giving you the skills to find your own voice and style. We’ll teach you the basics: story selection, article or film construction, making your work accessible to everyone, and also how a 21st-century newsroom works. All your work will of course need to keep within Canary values and style requirements.

But it’s really about supporting you to find out who you could be if you wanted to make a living in the media.

Thirdly, Amplify is about creating new, better journalists. Established, corporate media doesn’t work in our interests; it only looks after the rich and powerful. That’s why we all need voices like yours to be amplified. Your views, your stories, and your experiences are just as important as anyone else’s. They deserve and need to be heard. That’s what Amplify is about, and that’s what The Canary will support you in doing.

Want to know more? Give me a shout. You can email me via steve.topple(at)thecanary.co or link with me on socials – it’s @MrTopple. But you need to be quick: our deadline for applications is Wednesday 30 March 2022 at 5pm. You can fill in the form here:

I’ll let all applicants know if they’ve been successful or not by the end of Thursday 31 March – ready for the launch event on Sunday 10 April.

Check out the overview of the project below:

Amplify: we’re recruiting for the second round now