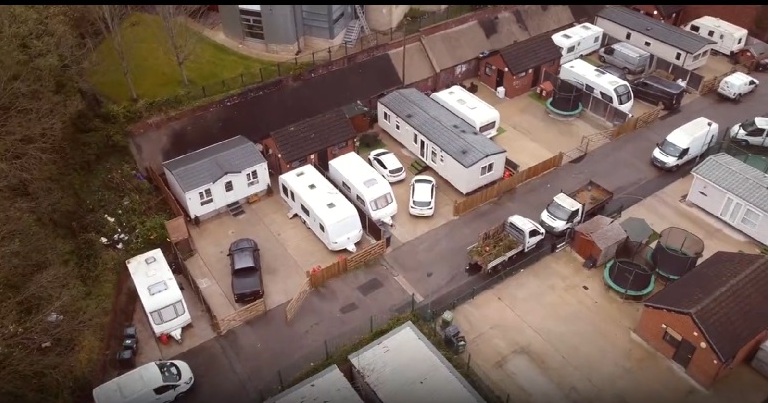 The Conservative party has recently passed legislation to stop travellers from staying in unauthorised encampments. The Police, Crime, Sentencing and Courts Act (PCSC Act) contains new measures that makes it a criminal offence if you’re “residing on land without consent in or near a vehicle” and “likely to cause serious damage or serious disruption”, or if you’re likely to cause “significant distress”.

In 2019, Lancashire county council voted to sell the Leighton Traveller Site in Preston, one of the authorised sites created for them in the late 1980s. In the event the new landlord evicted the residents the PCSC Act would make it harder for them to find a place to stay.

Local activists who observed these developments lobbied Preston city council to buy the site and run it as a co-operative. The campaign they started led to the city council buying the site in March 2022, enabling the residents to stay and have more of a say in how the site is run.

John Gavin is a resident and warden at the Traveller site. He predicted that the county council’s decision to sell the site would leave the families living there homeless. Gavin and two of the activists who linked up with him have spoken to The Canary.

Gavin described his and other residents’ initial efforts to reach local politicians:

The county councillors didn’t care. We petitioned every councillor in Preston, Liberal, Conservative, Green party. The only ones that got back to us were Mathew Brown (Council Leader at Preston City Council) and the Labour councillors.

He retold the story of his initial meeting with local activists soon before the county council reached its decision:

About a week before it I was thinking who we can contact now to get our point across, and I was there for about an hour just thinking. Then my wife said someone just knocked on the door.

Dave Crawshaw was one of the Preston Labour party members at the door who had heard about the case. Crawshaw told The Canary about the county council selling the site and the action he subsequently took:

I was present at the Lancashire County Council Cabinet meeting in September 2019 when the decision was made and was very shocked at the almost total lack of debate on the subject. The whole issue was done and dusted in about 5 minutes, and no one spoke out against the proposal … Within a few weeks we asked Preston councillors to adopt the site.

Crawshaw explained the co-operative model that the Council would use after it bought the site in March 2022:

It is called Leighton St Travellers Ltd so it is a company, but its articles of association are set up as a co-operative. So, for example, all the residents are entitled to be members of the co-operative and one of the directors is elected from the residents, so the residents have a voice and a say that they never had before … It would be more correct to say that Preston CC is our landlord although the rent is a nominal £1 per annum.

The residents pay rent as they did before, but the difference is that, instead of going to the council, the rent goes to the co-operative who are liable for maintenance of the site and buildings and for paying all the utility bills, insurance, council tax etc. We will not get any subsidy from the council.

In addition to maintenance being funded this way, the city council this June has applied to the Department of Levelling Up, Housing and Communities’ (DLUHC) Traveller Site Fund. The estimated cost of the entire project is £337,220.

Lancashire county council has responded to some of the assertions made in this article:

The decision was taken to seek new owners for the Leighton Street site as the county council has no statutory responsibility to provide sites for travellers, however it has always been our intention to include a covenant in any sale or transfer that the site must be retained for use by the travelling community.

The response to the public consultation about the future of the site made clear that many residents would prefer the site to be kept in public ownership and we are pleased to have come to an agreement with Preston City Council over its transfer, which will secure use of the site for current and future residents.

The activists The Canary talked to predicted the county council would sell the site to other travellers. But they also mentioned those who expressed an interest would likely want to evict the current residents.

Meanwhile, John Gavin praised businesses, the university, and unions for the role they played in lobbying the city council:

They got onto the councillors, they were sending emails, telephone calls, letters… Everyone said the Labour councillors contacted them back. But the Liberal and Conservative councillors didn’t acknowledge us.

In my opinion Preston Council differs from the vast majority of other councils because they have a genuine socialist agenda, where the people they represent are always put before political or financial gain.

The local Unite branch also paid for a computer for the sites’ residents to use for the running of the cooperative.

Contrasts with other councils’ approaches

Labour-led councils like Southampton have also taken a confrontational approach. This May, a Labour councillor called in armed police to prevent travellers from camping at a site.

The approach taken by the Preston Labour party, however, has convinced John Gavin to support them:

I would not be interested in any party but the Labour party and I have not voted in years… I have a completely different opinion now because of the Preston Labour party.

This campaign is notable due to activists in Preston observing developments in politics and being aware of the impacts on the community. The close relationship between Labour members, unions, and community organisations enabled councillors to quickly implement a solution. This in turn has enabled Preston to stand out in an environment where Travellers are subject to prejudice from the government, sections of the Labour Party, and other local authorities.