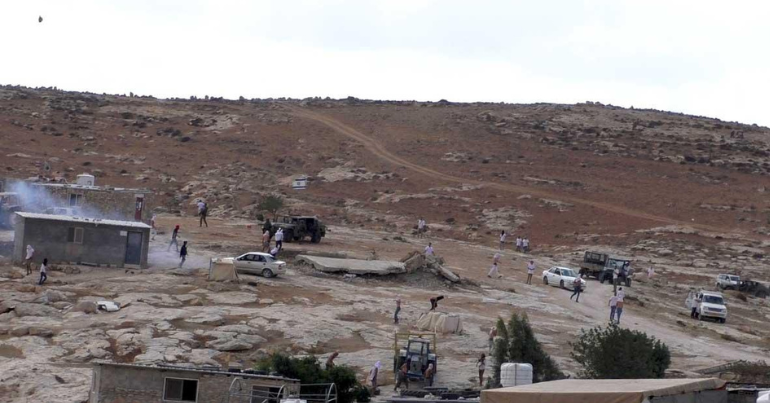 Masafer Yatta is a collection of small villages in the South Hebron Hills under siege from Israeli forces. It’s home to Palestinian residents whose very existence is under threat. In the early 1980s, this area was designated a military ‘firing zone’. This makes residents vulnerable to stray bullets hitting them or their houses, as happened in July this year, and any new structure – including animal pens, bathrooms or tents – could be demolished by Israeli forces at any moment.

In May, the Israeli High Court gave the go-ahead for the evacuation of the entire area by Israeli forces – a shocking decision that leaves the Palestinians here facing devastating dispossession. Just days after the ruling, Israeli forces moved in to demolish 20 structures in the area, and the other Palestinians living in the area remain under the constant threat of homelessness and evacuation. This ruling is only the latest existential threat to Palestinians in the West Bank and Jerusalem, following similar struggles against the threat of demolition in Khan al-Ahmar and Sheikh Jarrah in recent years. These two communities have managed to win stays of demolition in the Israeli courts – for now.

But for one Israeli group, the demolitions are not happening quickly enough. Regavim is a pro-settler organisation that advocates for the expansion of Israeli settlements in the West Bank and Jerusalem. The group is at the forefront of the battle to save – or destroy – Masafer Yatta, and is lobbying for the removal of Palestinians there. It claims that there was no historical Palestinian settlement in the area, and that the current villages have been constructed with the help of foreign humanitarian organisations. However, Israeli human rights NGO B’tselem states that Palestinians have lived in Masafer Yatta for many decades prior to the Israeli occupation of the West Bank in 1967.

Palestinian activist Tariq Hathaleen lives in Um al-Khair, a small Bedouin village near Masafar Yatta in the South Hebron Hills. He knows first-hand what Regavim can achieve when they deploy their tactics. He said:

In Um Al Khair specifically, the community oven was the victim of Regavim, where they made pressure on the Civil Administration [the Israeli state body that governs the West Bank] to demolish the oven and cut off the bread from 40 people.

That demolition, in 2014, was documented by the Good Shepherd Collective, and the video can be viewed here. When I spent time in Um al-Khair in 2019, he told me that Regavim flies drones above the village, monitoring their activity and notifying the Civil Administration of any new structure that they insist is illegal and should be demolished. Researchers have found that Regavim work closely with the Israeli government in the West Bank, effectively acting as a contractor in monitoring and surveilling Palestinian communities living in Area C. This is the area of the West Bank under temporary Israeli military and civil control according to the 1994 Oslo Accords, but which Regavim and the Israeli state have interpreted as an iron law. The Israeli state frequently demolishes Palestinan buildings in the West Bank, with the research group Shoal Collective reporting that over 30,000 Palestinians were made homeless by home demolitions in 2019.

Tariq tells me that Regavim:

focuses mainly on the law, and finding loopholes in it […] in the interest of the settlers.

Regavim mimics the approach of Israeli human rights NGOs that challenge the legality of settlements in the Israeli courts, by lodging what are known as ‘mirror petitions’ that challenge any Palestininan construction in Area C. Tariq says that it then:

exerts pressure on the [Israeli] authorities … forcing them to implement orders to demolish Palestinian homes in Area C, confiscate their lands and even arrest and imprison them.

The impact of Regavim’s work is to accelerate the dispossession of Palestinians from their lands and make Palestinian existence in places like the South Hebron Hills even more fragile.

Regavim was co-founded in 2006 by Bezalel Smotrich, from the West Bank settlement of Kedumin. Smotrich has served as a Member of the Knesset since 2015, and he is now running for re-election as leader of the Religious Zionist party. As well as pushing for the demolition and destruction of entire Palestinian villages in the West Bank, he also holds extreme homophobic and racist views. In 2006, he helped organise an anti-gay ‘Beast Parade’ in Jerusalem as a response to Gay Pride, and he has opposed marriage equality in Israel. Attempting to defend his abhorrent and intolerant views, Smotrich has said that conservative voices are ignored in Israel in favour of LGBT people. Smotrich has said that Arabs are ‘the enemy’, and notoriously called for the segregation of Arabs and Jews in maternity hospitals, saying:

It’s only natural my wife would not want to lie next to someone who just gave birth to a baby that might murder her baby in another 20 years.

Despite Smotrich’s extreme views, he served as Minister for Transport in Netanyahu’s last government, and Regavim receives funding from the Israeli state of up to 2 million NIS a year. It also received funds illegally from some settlement regional councils in the West Bank.

The growth of groups like Regavim is not a mere sideline in Israeli politics; rather, it is indicative of the lurch to the right in Israel in recent years. This is not a fringe organisation working at the edges of the Israeli legal system, but one that is central to the operation of the Israeli state and its efforts to exert full control over the West Bank. For Palestinians in the South Hebron hills and beyond, their very existence lies in the balance.

Featured image of an attack on Al Mufakara by Wikimedia Commons/באסל אל-עדרה via CC 4.0, resized to 770×403