How many Old Etonians does it take to destroy a country? | Alexei Sayle - The Canary 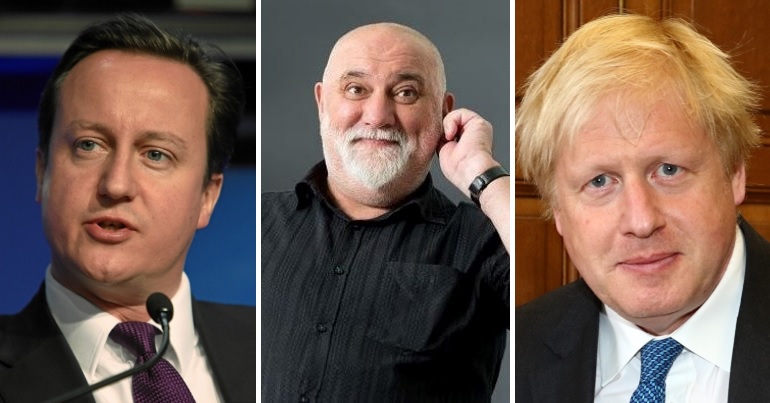 Apparently each time an Old Etonian becomes the Prime Minister of Britain every boy at the school gets a day off, as does every coke dealer in Central London. Honestly, given the number of psychopaths they turn out, the place should be placed in special measures. Old Etonian Boris Johnson’s government is moving rapidly ahead with all kinds of evil plans.

According to one of their recent election-winning proposals, the government would like everyone my age to carry on working until they are 85. So as an act of resistance, I have retired immediately and gone on a river cruise for a week up the Rhine, similar to the ones they advertise before “Midsomer Murders”.

We’ve just returned, and when people ask me what it was like, I reply- “Like Conrad’s ‘Heart of Darkness’ but with extra Australian racists.” It’s a bizarre experience floating along a giant river eating the strange “internationalist” cuisine they serve that comes from nowhere and often involves either a fish stuffed inside another fish or culinary collisions such as “Beef teriyaki goulash with tempura falafal cous cous.”

Travelling up the Rhine, one thing that struck me was how extensive the evidence of the damage done by the Second World War still is, and that got me thinking about what an utterly mad business war is. We accept it because it has always happened, but I mean what an insane way to settle a trade dispute or to make you feel better about yourself! To invade your neighbour, bomb everybody and destroy everything.

Now one of the many amazing things about Jeremy Corbyn when he comes to power is that he will be the first leader of a major industrial nation in modern history who is personally anti-war and who is not in the pocket of the massively powerful arms industry. To my mind this is one of the major reasons for the ferocious negative response to the prospect of a Socialist Labour Government, all the lies, misinformation and false accusations.

But think what that could mean for our nation? At the moment, thanks to BAE Systems and its subcontractors, Britain is possibly the largest dealer of death in the entire world. But under Jeremy Corbyn, we could make all manner of beautiful things that aid humanity rather than killing it, and how much better we could feel about our nation because of that? I am so passionate about this prospect that if you don’t like the idea I’ll fight you.