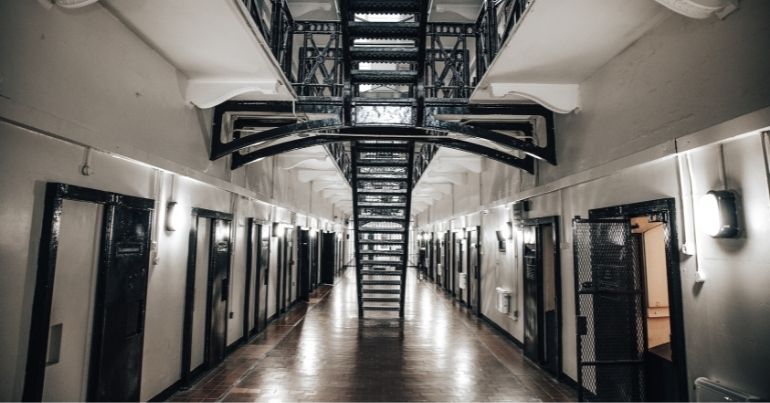 A demonstration was held on New Year’s Eve outside HMP Eastwood Park in Falfield, near Bristol.

New Year’s Eve is traditionally a day of solidarity with incarcerated people, but Bristol’s NYE 2022 was different, as people had heard the news that another person had died in custody shortly after Christmas. The anger was visceral.

Prisoners at Eastwood Park reported that a woman had died after a fire started in her cell. They said that they could hear her screams as the cell burned, and that prison staff did nothing to extinguish the blaze.

The Canary contacted both the Ministry of Justice (MoJ) and the fire service for a comment about what happened. Avon Fire & Rescue Service said that they had responded to a fire at the prison on 26 December. The MoJ said that a woman – named as 48-year-old Clare Dupree – died on 28 December, and said that:

As with all deaths in custody, the Prisons and Probation Ombudsman will investigate.

The MoJ claims that all “procedural efforts to put out the fire took place”. However, this statement completely contradicts the accounts from inside the prison.

Officers accused of doing ‘nothing to extinguish the flames’

ABC alleged that the officers (or ‘screws’) did nothing to try to put the fire out:

Just after Christmas, Clare Dupree died after a fire started in her cell. Prisoners in several wings heard her screams for help, but the screws did nothing to extinguish the flames. Women shouted out for the officers to help Clare, but they would not open the door of Clare’s cell, and failed to put a firehose through the cell’s hatch.

Under prison regulations, prison staff are supposed to be trained to use Respiratory Protective Equipment (RPE) in order to respond to fires inside prisons. The policy allows trained staff wearing RPE to enter a cell where a fire is taking place – if it is safe to do so – in order to remove prisoners. The prisoners’ accounts suggest that this did not take place.

Many cell doors are fitted with ‘inundation ports’ for prison officers to insert a hose in case of fire. However, ABC claims that this didn’t happen either.

We asked both Avon Fire & Rescue Service and the MoJ what specific measures had been taken to prevent Clare’s death. Neither made any further comment.

‘We feel deep anger and sadness’

Bristol ABC has invited Clare’s family and friends to contact them:

We didn’t know Clare, but we want to invite her friends and family to reach out to us. We hate the system that killed Clare, and we hate HMP Eastwood Park. Although we never met Clare, we feel deep anger and sadness at her death.

ABC stated that at least four people have died in custody at HMP Eastwood Park during 2022. One of them was Taylor, a trans prisoner who took his own life after serving 14 years of an indeterminate sentence with no end date in sight. The second person whom the group named was a woman called Kayleigh who, like Taylor, committed suicide soon after allegedly receiving a beating from officers:

Clare was at least the fourth person to die in Eastwood Park’s custody in 2022. Some of us knew Taylor, who cut his own throat and bled to death at Eastwood Park in July 2022. Taylor had faced violence and transphobia from officers. Guards beat him viciously just weeks before he killed himself. You can read more at https://bristolabc.org/riptaylor/

The same week that Taylor died, another prisoner named Kayleigh took her own life. She too had been the victim of a violent assault by officers just before her death.

The MoJ claims that there were three deaths at Eastwood Park in 2022. An MoJ spokesperson told the Canary:

The Prisons and Probation Ombudsman is investigating the three deaths in custody at HMP Eastwood Park in 2022, as they do with all such cases, and our thoughts remain with their families and friends. It would be inappropriate to comment before their investigations conclude.

The Independent Monitoring Board reports that a further death in custody – of a person who had been recently remanded – took place at Eastwood Park in July 2021.

Independent Monitoring Board ‘concerned’ about level of self harm

ABC’s figure of four deaths in custody in Eastwood Park during 2022 is double the two deaths recorded by the Independent Monitoring Board (IMB) during their reporting year ending in October 2020.

In its last published report from 2021, the IMB said it was “concerned about the levels of self–harm and violence” at Eastwood Park, and that it had to “stop short of reporting that prisoners were treated humanely” because of the lengths of time people spent locked up. The time people spent in their cells had gone up as a result of the Covid-19 pandemic, but the increase has continued long after the end of coronavirus lockdown restrictions.

Recorded self-harm incidents reached over 200 during one month in 2021. The IMB also expressed concern that a prisoner with an acquired brain injury had been segregated for over 1200 days. This is despite the UK Supreme Court acknowledging that the Council of Europe’s Committee on the Prevention of Torture advises that segregation for punishment purposes should be limited to just 14 days.

‘Murdered by the state’

The ABC statement said that violence and sexual violence by officers at Eastwood Park is common:

Attacks by screws are common in Eastwood Park, and so is sexual violence. Taylor and others have shared with us how women have been forced to give oral sex to officers in exchange for drugs being brought from outside.

We put these allegations to the MoJ, but had not received a reponse by the time of publication.

ABC said that it holds the prison responsible for the deaths that have taken place in its custody. In fact, it sees Clare, Kayleigh, and Taylor’s deaths as murders “by the state”:

like Taylor and Kayleigh – Clare was murdered by the state. Their names – and their murderers – should not be forgotten.

The group said that it is afraid for other friends and comrades currently imprisoned at Eastwood Park:

We are actively involved in supporting friends and comrades in HMP Eastwood Park right now – and we are scared of what this rotten institution might do to them. We want to invite anyone whose loved ones are imprisoned in Eastwood Park to get in touch, so we can support each other. Solidarity is strength!

Clare’s death has – up until now – not been reported in the media. This is an example of the callousness and apathy endemic in the mainstream press towards prisoners. The fact that this violent death in state custody went unreported for so long is deeply disturbing. It is not acceptable for prison deaths, skyrocketing levels of suicide and self harm, and isolation to the point of torture to become normalised.

As an institution, prison – like the police force – is a tool that helps maintain the power of the existing ruling class. The violence of prison is predominantly felt by working class people, people of colour, and other structurally oppressed groups. If we want to stand with the oppressed, we need to envision a society without prison, and stand against the injustices that prisoners are facing right now.

Around the UK, local community organisers have been establishing Copwatch groups to counter the violence of their local police forces. We need similar local initiatives to be set up in every community to defend ourselves against the violence of prisons.

It’s important that we honour the memory of Taylor, Clare, Kayleigh, and all the incarcerated people who have lost their lives behind prison walls. We can do this by not standing idly by while more of our comrades are killed by the carceral system. We need to show up for our friends inside, and fight for the abolition of prisons.

Featured image via Unsplash, resized to 770*403