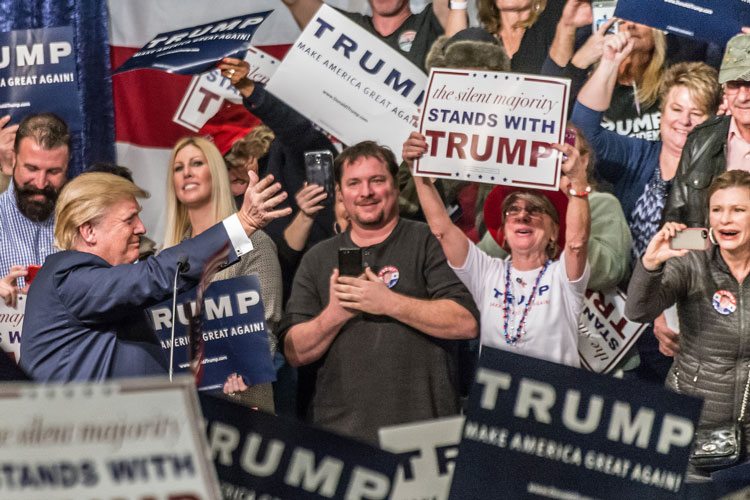 At a rally in Wilmington on 9 August, Donald Trump made a statement about Hillary Clinton; perhaps a threat, perhaps a throwaway joke, or perhaps a genuine call for “unification” as his team is claiming. He said that Clinton wants to “essentially abolish the Second Amendment” – the right to ‘bear arms’ – and that if a President Clinton got the chance to pick liberal Supreme Court judges, then there’s “nothing you can do, folks”. He then added: “though Second Amendment people” – i.e. people who like guns – “maybe there is, I don’t know”.

Everyone except Trump’s campaign crew appears to believe he was covertly calling for Clinton’s assassination, or at the very least inciting violence. Overnight, there was popular uproar about his divisive and dangerous rhetoric, along with calls for him to be officially investigated and his campaign ended.

Trump’s comments have been gradually losing their ability to shock. But this one might be particularly inoffensive, in context. Trump’s ignorant and immovable stance on America’s (read: his own) greatness, and dominance in the face of ‘competition’, is the product of a culture that has always legitimised violence as necessary, and a ‘solution’ to things we don’t like or agree with.

And perversely, his comments about the Second Amendment are arguably closer to its original meaning than the current reigning interpretations.

‘Presidents should not suggest violence’

This is simple — what Trump is saying is dangerous, a person seeking to be the president of the United States should not suggest violence in any way.

Trump’s camp, on the other hand, are insisting he was talking about the great patriotic spirit of American gun owners, and their collective democratic ability to elect him. Trump’s communication adviser Jason Miller said:

It’s called the power of unification – 2nd Amendment people have amazing spirit and are tremendously unified, which gives them great political power.

The Secret Service, tasked with protecting presidential nominees in the months running up to an election, tweeted:

The Secret Service is aware of the comments made earlier this afternoon.

“Second amendment people” include not only individual gun owners but also the five million-strong National Rifle Association (NRA), and the wider gun lobby. Granted, this group has a lot of money, and therefore a lot of power in American political life. But whether or not Trump was referring to the democratic power of millions of politically active NRA members or a potential assassination of Clinton is unknowable because of his inability to distinguish between political work and bandying about dog-whistle comments.

A ‘dog whistle’ comment is so-called because of its ambiguity and subtlety, enough that its ultimate meaning is never entirely detectable. This phrase has been frequently used to describe Trump’s rhetoric, and Rolling Stone magazine called his latest comments “Stochastic terrorism“:

Stochastic terrorism, as described by a blogger who summarized the concept several years back, means using language and other forms of communication ‘to incite random actors to carry out violent or terrorist acts that are statistically predictable but individually unpredictable.’

Let’s break that down in the context of what Trump said. Predicting any one particular individual following his call to use violence against Clinton or her judges is statistically impossible. But we can predict that there could be a presently unknown lone wolf who hears his call and takes action in the future.

Stated differently: Trump puts out the dog whistle knowing that some dog will hear it, even though he doesn’t know which dog.

The problem appears not to be that Trump was designating violence – that’s part of the Commander in Chief’s job, after all. It’s that he was doing it against the grain of ‘democracy’. But it could be argued, from a crooked angle, that he was suggesting it in the name of ‘freedom’.

Numerous texts, from the Bible to Nietzsche, have been used to justify everyday and extremist violence. The American Constitution is another of these. Arguably its most contentious part, the Second Amendment is not as simple as merely allowing people to own and use guns:

A well regulated militia, being necessary to the security of a free state, the right of the people to keep and bear arms, shall not be infringed.

Interpreted one way, this constitutes a right to temporarily choose to take up arms alongside your well-regulated neighbourhood militia at a time when you are being directly threatened by a tyrannical government, in order to protect the collective rights of the people.

The interpretation held by many today is that any American must be able to own a Tec-9 assault pistol or a fully automatic AR 15, regardless of harm caused, simply because they want one.

Assuming that Trump was suggesting someone could shoot Clinton, interpreting Hillary’s “anti-2-A” stance as tyranny, he could have been simply noting that ‘American patriots’ could protect their ‘free state’ and its constitutional rights.

That said, considering his overblown regard for the wielding of power against ‘the weak’, and for himself, it’s clear to the majority that Trump was not advocating a revolution by the people against tyranny but quite the opposite: absolute loyalty from his followers.

The Second Amendment demonstrates that even seemingly clear statements can be easily and chronically misused. And there’s no reason to treat the potential for Trump’s comment to do harm as an exception.

Whether or not any one of Trump’s outrageous comments is intended to cause harm, divide or oppress is irrelevant. His mode of working – a careless use of oppressive language and his carefree denial of the implications of it – fosters violence and division anyway.

It legitimises similar behaviour throughout society. One of Trump’s advisors recently called for Clinton to face a firing squad due to her ‘treasonous’ actions regarding the email server scandal.

Violent domination in the name of ‘freedom’ is an unfortunate pillar of American, and British, history, that continues to wholly pervade Western culture. It manifests itself in our popular culture, in rape culture, and in many military operations. Trump’s entire attitude to the world around him is one of domination. He is a hyper-manifestation of a culture of dominance.

The best politicians are clear, fair, and uphold integrity. Mistakes are easily made in public speaking, and plenty of other ‘legitimate’ political candidates come to mind when talking about politicians who are terrible at the job. But the fact that Trump actively ignores and/or denies his repeated breaches of the most basic standards of decency is just one signal that he is genuinely unfit to lead. A 26th mistake is not a mistake. It’s a habit.

To show why the defence that Trump is “just joking” doesn’t work, Jason P. Steed created a thread to explain the social function of supposed “humour”. It begins here:

1. I wrote my PhD dissertation on the social function of humor (in literature & film) and here's the thing about "just joking."

Neither is Clinton a model politician, of course; she has also said brutish and unacceptable things, and is sorely representative of imperialist Western culture. But perhaps the only thing more frightening than this year’s choice of candidates is that Trump’s continual ‘gaffes’ are only now seeming to dent his popularity. It was over a year ago that he suggested Mexicans were all rapists, and then repeatedly defended the comment by asking “who’s doing the raping?” over and over again.

It’s confusing, frightening, and painful to consider that since that moment his campaign only soared, leading us here. Watching him race towards potential leadership of the most powerful nation in the world. And he’s doing it with the support of an entrenched culture of violence that we must also learn to curb.