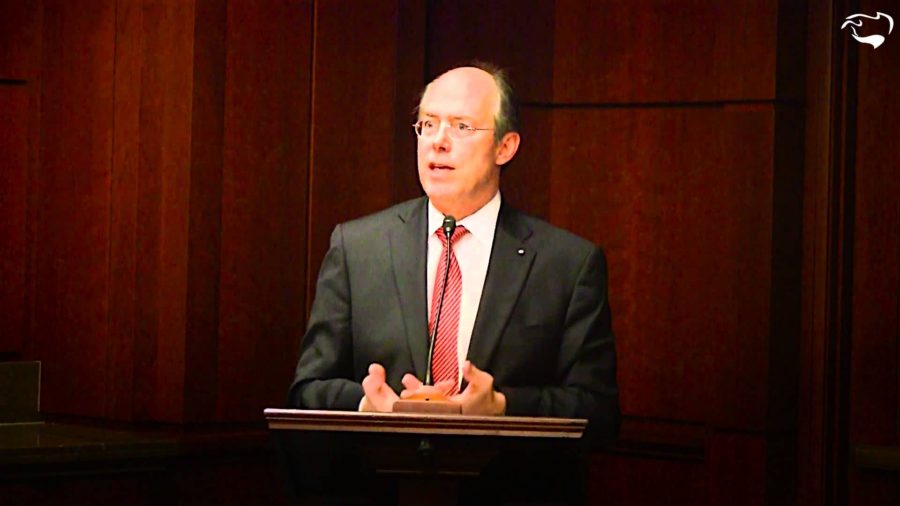 Republican presidential nominee Donald Trump has once again claimed that both President Obama and Hillary Clinton “founded ISIS” – a charge which first stirred controversy earlier in the summer when Trump tweeted an article stating that the administration had joined Gulf allies in supporting al-Qaida in Syria.

But Trump’s own top foreign policy adviser, Joseph Schmitz, teamed up with a Saudi prince in a bizarre and illegal private initiative to arm rebels in Syria in 2013.

According to a 2014 Wall Street Journal (WSJ) investigation, Schmitz – previously a Bush-appointed Pentagon Inspector General and former executive of discredited private military contractor Blackwater (since renamed Academi) – was at the center of a private endeavour to move a massive cache of weapons from Ukraine to Syrian rebel territory via an unnamed Saudi financier:

On their own, the Americans offered to provide 70,000 Russian-made assault rifles and 21 million rounds of ammunition to the Free Syrian Army, a major infusion they said could be a game changer. With a tentative nod from the rebels, the group set about arranging a weapons shipment from Eastern Europe, to be paid for by a Saudi prince.

Schmitz was in direct contact with then Free Syrian Army (FSA) commander Gen. Salim Idris. Schmitz hoped his deal with Gen. Idris would be a first step toward potential future assistance from Blackwater founder Erik Prince himself.

Schmitz described Idris to the WSJ as a “moderate freedom fighter”, in spite of the fact that at the very time the plan was in motion, right-wing media was screaming about Idris’ multiple public statements suggesting an ambiguous battlefield partnership with al-Qaida.

Gen. Idris’ own northern commander of the Aleppo military council in 2013, Col. Abdul Jabbar al-Okaidi, boasted in public statements at the time that:

My relationship with the brothers in ISIL is good…and al-Nusra Front [al-Qaida in Syria], which perhaps constitutes ten percent of the Free Syrian Army (FSA) in Aleppo or Syria…

Idris and Okaidi were the very men that Joseph Schmitz stood ready to arm through a mysterious Saudi middle man before the whole private venture was reportedly shut down by a CIA official who intervened in Amman, Jordan.

Vice President Joe Biden, in remarks given at Harvard in 2014, would blame US allies Saudi Arabia and others for the rapid rise of Daesh (Isis/Isil), as the kingdom was confirmed to have continuously armed the most radical groups in the Syrian war.

Schmitz, whose plan centred on Saudi support, is well known in Washington for his “neo-crusader” rhetoric which envisions the world as a civilisational battleground between Christianity and Islam. In a July 2016 interview with Breitbart News Daily radio, he said that the Obama administration had allowed the Muslim Brotherhood to embed itself in the US government at “very senior levels” and that Trump would solve the crisis:

What you’re gonna see is, instead of our Commander-in-Chief hiring the Muslim Brotherhood to advise them on the enemy, you’re going to see Donald Trump hiring the very best experts he can find, regardless of political party.

But Schmitz himself was getting in bed with the Muslim Brotherhood. Ironically, at the very time in 2013 that Schmitz initiated his plan to arm FSA militants, a man named Ghassan Hitto took over leadership of the Syrian National Coalition (the opposition political bloc representing the FSA). Hitto was widely reported to be “the Muslim Brotherhood’s man” in Syria.

Schmitz continued to boast about his initiative to arm militants in Syria even after Gen. Idris fell under suspicion for having allowed a large warehouse of western-supplied military equipment to fall into the hands of the al-Qaida affiliated Islamic Front (Idris had pledged support to the Islamic Front just prior to the group’s takeover of the supplies).

The Canary reached out to Joseph Schmitz for comment on this story but its questions went unanswered.

As Trump continues to rail against perceived secret support of the Muslim Brotherhood and supposed jihadist sympathisers within American political ranks, he should look no further than his own foreign policy adviser.

– In the UK, join your local Stop the War Coalition to protest escalation in Syria.