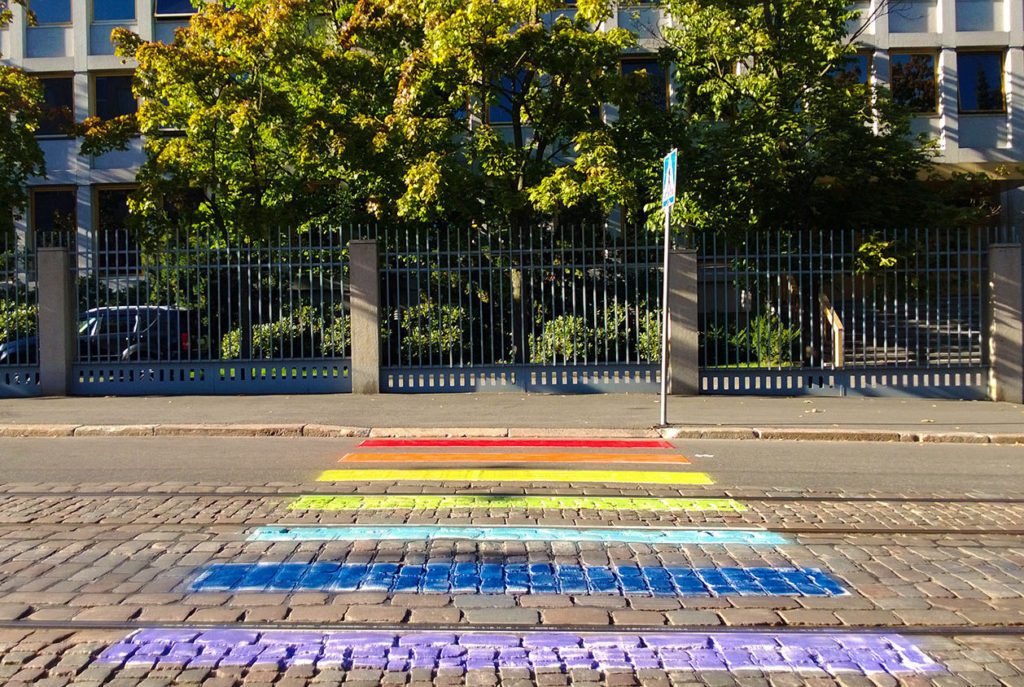 A right-wing news editor has caused outrage at the Olympics after posing as a gay man on the dating app Grindr in order to ‘out’ dozens of athletes.

Nico Hines, London Editor of The Daily Beast, gave specific details of countless individuals who had approached him via Grindr and other apps. In doing so, he may have put some of the sportspeople’s lives at risk.

What happens in the village…

In recent years, much has been made of the Olympic village’s reputation as being a hotbed for promiscuity, and of the large numbers of condoms supplied to the athletes in residence.

Many of these athletes hail from personal circumstances and/or countries which are repressive towards homosexual people. Some may well have chosen to keep their sexual preferences private.

The cosmopolitan and nonjudgmental environment of the Olympic village might understandably seem a safe place. Somewhere for happy and exhilarated sportspeople to finally ‘be themselves’. This is an understanding described by Olympic gold-medallist swimmer Summer Sanders as the ‘second motto‘ of the Olympics:

But Hines saw this safety and seclusion as something to be shattered in the interests of a sensationalist ‘scoop’.

He may well have been forgiven for writing an article focusing on promiscuity and sexual attitudes if he had tackled the subject openly and honestly, been upfront, or offered anyone willing to discuss the matter anonymity.

Instead, he grossly infringed on personal privacy by deceitful means, even naming the athletes in the process. The lure of such a sensationalist story was apparently too pervasive to ignore, regardless of the consequences or whose lives might be ruined as a result.

Too little, too late, for the athletes?

Backlash against the article was furious, and widespread. The Washington Post has since described it as:

The Daily Beast came under pressure to remove it from their website. But their editor, John Avlon, initially refused to do so, choosing to stand by both the piece and the writer. Avlon later gave way, and removed the publication of athletes’ names. But the essence of the story remained.

A day later, the article was finally removed entirely. The link is now replaced with a formal apology from the editors at The Daily Beast, which reads as follows: 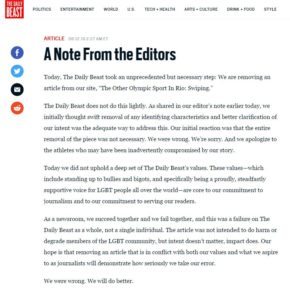 The Daily Beast should be commended for putting its hands up and admitting to a fairly heinous mistake. But it is hard to imagine how anyone could have believed that publishing the article was a good idea in the first place. At best, it demonstrated a blase attitude towards the difficulties and challenges faced by the LGBTQ+ community. At worst, it was a quite callous and unethical decision to endanger the careers and personal lives of LGBTQ+ athletes, possibly even inciting hatred against them. All simply to garner readership.

The site’s retraction can in no way lessen any damage already done by the public ‘outing’ of these athletes.

When the media goes too far

In the competitive fields of news and media entertainment, journalists and writers undoubtedly face a challenge in sourcing stories and headlines that will spark interest. Particularly with the stark growth of online readership.

The internet has widened the playing field and a handful of media giants no longer have an unchallenged monopoly over the market. This should be viewed as a positive thing that enables a more balanced and less propagandist narrative.

But it also requires independent news organisations and writers to follow their own journalistic standards very carefully. They have to question the ethics/mandate behind why they are writing. There are many worthy motives to choose from: to inform and to reveal truth; to challenge; to entertain; to evoke personal responsibility; to politicise readers and to increase perspective. But when the motive is simply to demonise or turn a spotlight on one specific and potentially vulnerable group, simply for a great headline, questions should always be raised.

Private issues such as sexual inclination should not be considered ‘fair game’, or in any way a justifiable focus of media attention. But unfortunately, it’s a symptom of the 20th/21st century ‘cult of celebrity’. The general public has an enormous appetite for familiarity with those who are famous. Starting with Hollywood film and music stars, the almost voyeuristic interest today stretches out into a multitude of different industries. Often to those who might wish to be acknowledged simply for what they do rather than how they live. In short, not all those in the public spotlight wish to be ‘celebrities’. And media outlets don’t always have the right to make them so.

Perhaps the appetite can be justified for multi-millionaires and media stars. The ‘elevated’ who live like kings and queens among us. Also, for those who would flaunt their personalities and lifestyles in public view, or on ‘reality’ television. In the realm of politics, there is a somewhat justifiable desire to accurately ‘know’ a candidate. It’s a yardstick by which to measure the authenticity and motives of the policies they pioneer.

But to demand personal knowledge and invade the privacy of Olympic athletes, most of whom hail from modest backgrounds and means? That’s going too far, and it’s an abuse of The Daily Beast’s readership platform.

– Take action with Hope not Hate to help create a modern and inclusive Britain.

– See other Canary articles related to the issue of homophobia.