Chelsea Manning just got punished with a form of torture, for being suicidal - Canary 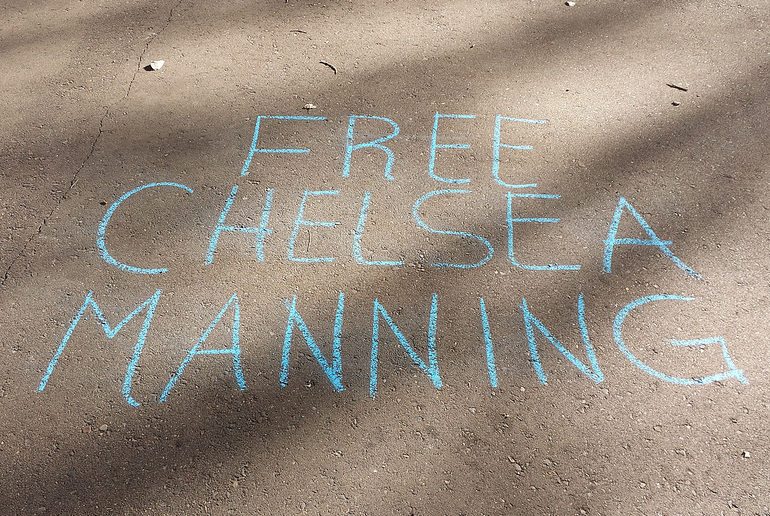 On 22 September, renowned whistleblower Chelsea Manning stood before an administrative disciplinary board, which decided whether or not she should be punished for her suicide attempt earlier this year.

Manning was sentenced to 35 years in the male military prison Fort Leavenworth in Kansas in 2013 for leaking secret documents relating to the US war effort in Iraq and Afghanistan to Wikileaks. She came out as transgender shortly after being sentenced.

Since receiving her diagnosis, Manning has been battling with the US military to get the treatment she needs. Now, she has been sentenced to 14 days solitary confinement for trying to kill herself.

There were three charges against Manning relating to her suicide attempt: “resisting the force cell move team”, “conduct which threatens”, and the possession of “prohibited property”.

What this meant in practice is that Manning was unconscious when the force cell team discovered her (this, apparently, counts as “resisting”), that attempting suicide threatens the “good order, safety, and running of the facility”, and that she had a book in her cell that did not have her name in it.

Because it was a disciplinary board hearing rather than a court hearing, Manning had to represent herself. Fight for the Future explains:

Chelsea must prepare her defense completely on her own, and will appear in front of the three person panel alone. She is not permitted to consult with or have an attorney or other advocate present during the hearing. The hearing itself could last for hours and there will be no transcript or account of the proceedings available to the public beyond what Chelsea herself is able to convey.

In an op-ed for The Guardian on 20 September, Manning described the process as “rather stressful“. Ultimately, she was found guilty on the second and third counts. Though eventually sentenced to a fortnight in solitary, she initially faced indefinite confinement – potentially for the rest of her sentence.

In 2015, the United Nations (UN) Special Rapporteur on torture, Juan E. Méndez, said of the practice of indefinite solitary confinement:

[It] inflicts pain and suffering of a psychological nature, which is strictly prohibited by the Convention Against Torture.

Isolating someone from all human contact seems especially cruel when the reason for this punishment is a suicide attempt. Manning has described how “talking to family and friends” is the main thing that keeps her going.

Manning has explained that it was her treatment at the hands of the US military that led her to the point of desperation that preceded her attempt. She said in a statement:

I was driven to suicide by the lack of care for my gender dysphoria that I have been desperate for. I didn’t get any. I still haven’t gotten any.

At the time Manning came out as transgender in 2013, Dr Randi Ettner evaluated and diagnosed Manning. She wrote:

were Ms Manning’s gender dysphoria to be properly treated all of these symptoms would be attenuated or eliminated.

Ettner recommended a treatment plan that included hormone replacement therapy, and for Manning to be allowed to express her gender identity through wearing her hair long. Ettner also concluded that Manning should undergo gender-affirming surgery.

The US military has been less forthcoming. Though Manning has since succeeded in getting access to hormones and cosmetics, she is still required to comply with male military standards including keeping her hair short. As she explained in 2014:

For this reason, Manning is constantly being reminded of the person she is not. She said:

In my daily life, I am reminded of this when I look at the name on my badge, the first initial sewed into my clothing, the hair and grooming standards that I adhere to, and the titles and courtesies used by the staff. Ultimately, I just want to be able to live my life as the person that I am.

In September 2016, Manning began a hunger strike in response to the military’s continued refusal to allow her access to a surgeon. After five days, she revealed that she was bringing the strike to an end. She explained:

I was shown a memorandum with my name on it that confirmed the military is moving forward with my request. Everything that they have presented to me leads me to believe that they are going to provide the care that has been recommended by my doctor.

Unfortunately, Manning has had no time to celebrate. The same week she found out she was going to get access to surgery, she also found out about the hearing. Since then, she has been doing all she can to prepare for it.

The reality for transgender prisoners

Manning is very clear about one thing – her experience is not unique. She said:

I am not alone in my struggle. Suicide pervades the trans community. The risk among our trans siblings with no or inadequate treatment is staggering. In comparison with the general population, the risk is a full order of magnitude higher. While a specific suicide rate among trans prisoners is not available, it is estimated to be significantly higher than among the community outside.

Placing transgender prisoners in facilities for the gender they are not, dead-naming and misgendering them, forcing them to comply with standards that do not fit their gender, and enacting psychological and physical violence against them is all part of the structural abuse experienced by trans people the world over. Manning has been battling this system since her imprisonment, and it is likely that she will continue to face barriers to living as the person she is.

But one thing is for sure. Punishing a vulnerable woman with solitary confinement simply for being suicidal is a form of abuse.