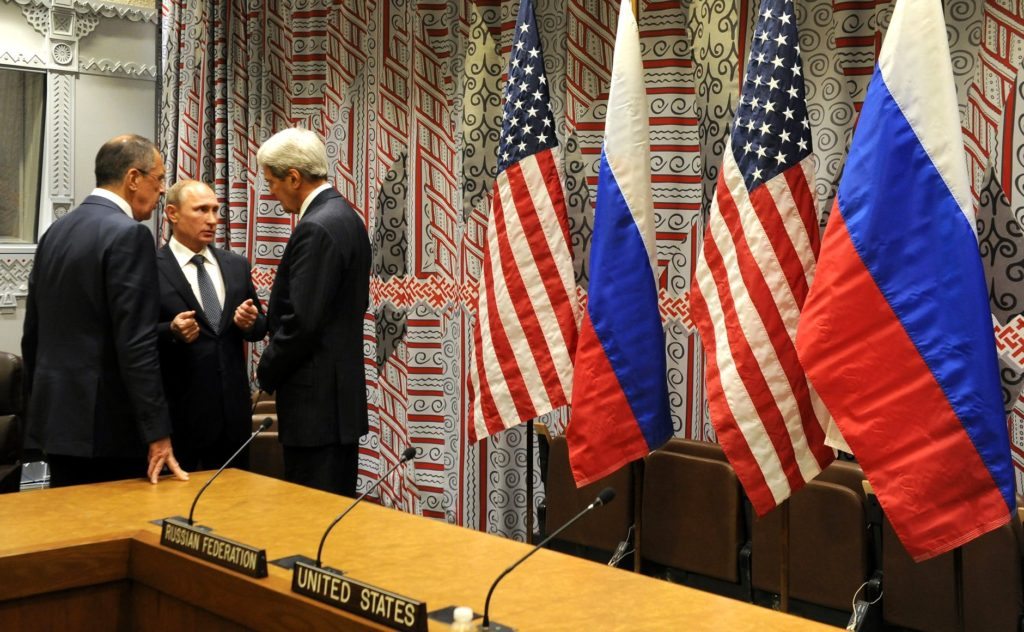 Things are getting scarier by the minute in Syria. Just when it appeared that a new plan for Russian-US cooperation might take effect, the deal unravelled, leading to tense and bizarre moments at the UN. A week of escalation then followed, as each nation’s warplanes came closer and closer, a UN aid convoy was hit, and propaganda wars raged in the world’s media. As one blogger put it:

This is playing with fire in a room full of dynamite.

The latest tensions began on Saturday 17 September, when US aircraft bombed Syrian government troops engaged in fighting Daesh (Isis/Isil) in Deir Ezzor. At least 62 Syrian government personnel were killed, and over 100 were wounded. Tensions had already risen in mid-August when the Syrian army came into direct conflict with Kurdish-led YPG/J forces (whose efforts have also been focused on fighting Daesh, with recent advisement from US special forces) in north-eastern Syria. When the Syrian Air Force scrambled jets to the area, the US threatened to shoot down any planes coming near the US military advisors who were on the ground.

Western coalition planes in some areas over Syria are now enforcing what might be called de facto no fly zones. What has for the past few years been a complex proxy war between Russia and the US is now on the verge of breaking into an all-out war between the international powers and the regional governments they back.

Showdown at the UN

While the US was quick to accept responsibility for hitting Syrian government positions in Deir Ezzor, calling the strike an accident, Russia called an emergency UN Security Council meeting that same day to condemn the attack.

Russia’s representative to the UN, Vitaly Churkin, suggested that the strike was an intentional provocation which resulted in Daesh’s advance on the city. US ambassador Samantha Power angrily stormed out of the closed-door UN session, denouncing it as a Russian “stunt”. An irate Power said to reporters gathered in the hallway outside the UN meeting:

Even by Russia’s standards, tonight’s stunt – a stunt replete with moralism and grandstanding – is uniquely cynical and hypocritical.

Days later, President Assad charged the US – which is reportedly investigating the incident – with an act of “flagrant aggression“.

On the Monday following the Deir Ezzor incident, a UN aid convoy was attacked as it was delivering supplies in Aleppo. Civilian aid workers were killed in the process. Russia was quickly blamed in international media outlets for the strike, as the US alleged that its aircraft were operational in the immediate area. Russia firmly denied that either its own forces or those of its Syrian allies were responsible, offering varied explanations as the week progressed, including that nearby rebel mortar fire had hit the vehicles.

Adding to the confusion was the UN’s own initial public statement on the strike. The first official press release said “airstrikes” had hit the aid convoy, but this was quickly changed to a less conclusive “strikes”. This update was reportedly made after Russian protests, and as headlines quick to condemn Russia and Syria spread around the world. UN spokesman Jens Laerke attempted to clarify:

Currently, what could be described as a public relations war is ensuing between the US, Russia, and each side’s regional allies. Russian-aligned outlets are promoting the Russian version of the UN convoy attack, while emphasising the earlier US strike on Syrian troops. And Western sources already seem to have forgotten the ‘accidental’ attack on Syrian troops, while condemning Russia and Syria for an ‘intentional’ strike on the Aleppo aid convoy. At the same time, The New York Times published a piece examining the recent history of “accidental” US airstrikes amidst the “fog of war”, claiming:

There are no known instances in the last 15 years of American-led forces deliberately targeting noncombatants or allied troops in airstrikes.

US Secretary of State John Kerry, in scathing remarks before a special session of the UN Security Council, described the Russian view of events in Syria as “a parallel universe”, and warned that Syria’s future is “hanging by a thread”. He called for aircraft to be grounded over designated ‘humanitarian’ areas of Syria, which amounts to a ‘no-fly zone’. Russia rejected the proposal as a potential threat to the sovereignty of its Syrian allies.

In a US Senate hearing over the crisis, America’s top general said that an all-out war would be required to enforce a no-fly zone over Syria. General Joseph Dunford, Chairman of the Joint Chiefs of Staff, testified that:

Right now… for us to control all of the airspace in Syria would require us to go to war against Syria and Russia.

With tensions at an all-time high, and acts of war being openly discussed, the world should pause and consider that another single incident in Syria could be the spark that ignites the dynamite of a world war.

Both the US and Russia already have large high-tech bombers flying over Syria with increased regularity. For a little perspective on where we may be headed, see the below recent footage of a US B-1 bomber operating in the region.

Will we witness ‘bombs away’ in an open war among major powers, or will saner minds prevail?

– Watch [free] the important documentary Leading to War which chronicles how the public was misled about the invasion of Iraq.

– Join your local Stop the War Coalition to protest greater escalation and war in Syria.

– See other Global articles from The Canary and more on Syria here.