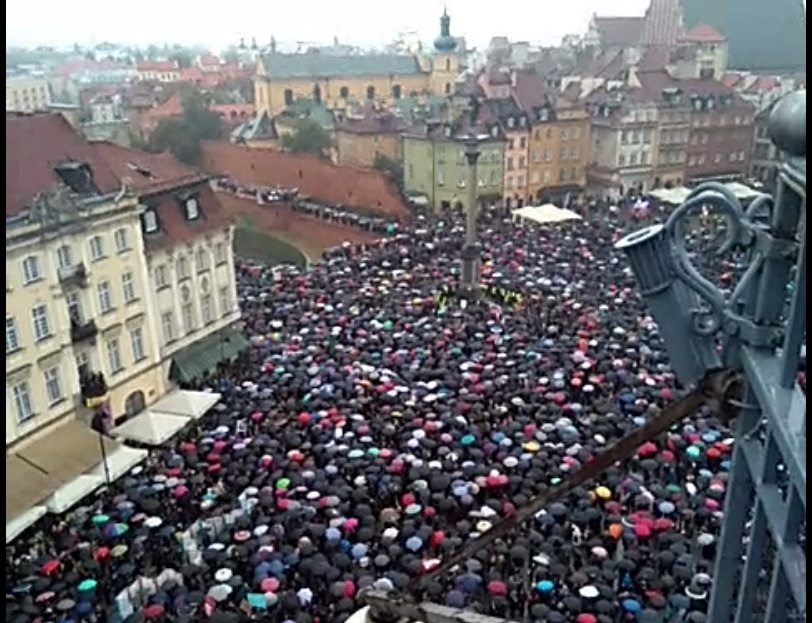 Women in Poland held an all-out strike on 3 October in response to proposed abortion legislation that would completely outlaw the procedure.

Currently, abortion is permitted in circumstances where the life of the foetus is threatened, there is a grave threat to the mother, or the pregnancy was caused by rape or incest. But if the new act is passed, all abortion will be criminalised. Women who have terminations could face prison sentences of up to five years, and doctors found to have assisted a termination could also face jail.

For many women in the country, this is a restriction too far. There’s also a concern that the new rules may place women who suffer miscarriages under suspicion. Poland is a predominantly Catholic country, but as reproductive rights activist Krystyna Kacpura described in The Guardian last month:

even Catholic women are appalled at the move by the Law and Justice party to restrict our already limited reproductive rights. “Not one step further,” goes the rallying cry.

In response, pro-choice activists called for all women in the country to strike. The day has been called ‘Black Monday’ or the ‘black protest’ because activists say they are in mourning for their reproductive rights. Many are wearing black to signify this.

Initial reports on 3 October suggested that some businesses had closed to let their female employees participate. The city hall in Częstochowa, reportedly one of the most Catholic cities in Poland, reported that 60% of women had not turned up to work.

Events took place around the country, and Polish women and journalists were sharing photographs and videos from the streets on Twitter (using hashtags related to the protest):

So far, thousands are thought to have joined the protests. And there have also been solidarity protests across Europe, from Berlin to Helsinki.

Women in Poland, you're not alone!

Hundreds are protesting alongside in Berlin at the moment.

Where did it come from?

The proposal for the ban originated with a conservative advocacy group called Ordo Iuris, and was submitted to the government by the Stop Abortion coalition as a “citizen’s initiative”. Because the petition reached over 100,000 signatures, it had to be considered by Poland’s parliament.

Because many people in Poland are religious, support for restrictions on abortion is high – as many as 74% reportedly support the legislation as it stands. But according to a poll by Ipsos, 50% of citizens support the Black Monday strike. And judging from photographs on Twitter, more than a few of them were out on the streets.

The legislation is still being considered for now, but whatever the eventual outcome, Polish women achieved something admirable on 3 October, showing that you don’t have to take injustice sitting down.

– Sign the open letter in solidarity with Polish women.