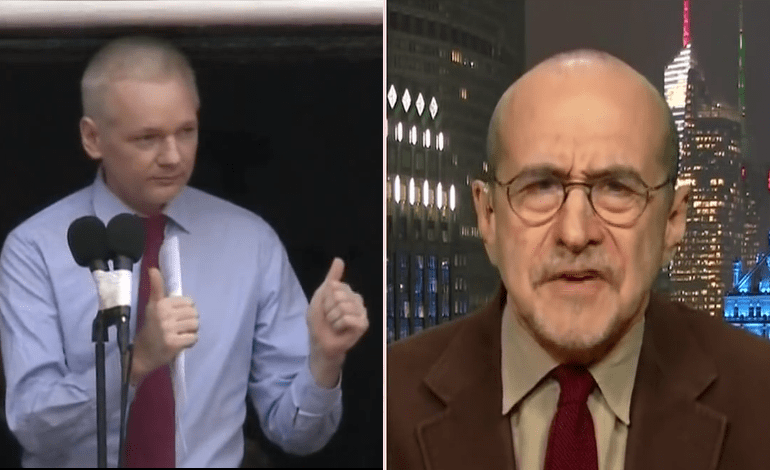 Mark Crispin Miller, Professor of Media Studies at New York University (NYU), revealed what he views as the real ‘fake news’ in a blistering attack on the mainstream media:

Fake news is a problem because the corporate press itself pumps out so much of it.

Miller on The Guardian

The author and academic made the comments on RT America. He appeared on the channel to discuss how The Guardian recently misrepresented an interview with Wikileaks founder Julian Assange. Miller claimed:

It’s just the latest propaganda salvo in a long attempt to, basically, demonise Julian Assange and punish him for his inconvenient truth telling.

He also expressed how many might react to the news that The Guardian is distorting the truth:

Well it was on the one hand shocking to discover that The Guardian, which… has always been a reputable paper and one of the flagship outlets of the liberal media in Britain and the United States, would run a piece highlighting two bald-faced lies.

In The Guardian’s viral article, writer Ben Jacobs claimed Assange had given “guarded praise” of incoming US President Donald Trump. And he asserted that Assange had said his whistleblowing site was not needed in Russia because an “open and competitive debate” exists in the country. These are the “bald-faced lies” Miller speaks of.

The journalist that Edward Snowden entrusted with the NSA leaks, Glenn Greenwald, was first to rubbish both these claims at The Intercept. Greenwald points out that interviewer Stefania Maurizi did not even ask Assange whether he had any support for Trump. Rather, she asked what the Wikileaks founder thought Trump’s presidency means. Neither did Assange suggest that Russia had “open and competitive debate”, notes Greenwald.

These two claims bore no relation to the actual interview that the reporter for The Guardian was purporting to paraphrase. This was an interview that Assange had done with an Italian journalist, who is outraged at this complete and total misrepresentation of the interview she did with Assange.

The interviewer, Maurizi, expressed her fury in a tweet:

.@ggreenwald I am completely furious about how my interview with Julian #Assange has been distorted and strumentalised

Backing Maurizi, the professor was dismayed at how far this misrepresentation travelled:

Hundreds of thousands of people now have picked up the propaganda from The Guardian and are convinced that Assange said these things which were calculated, really, to defame him; to discredit him.

Miller went on to say that this type of false reporting is not uncommon in the corporate press:

These claims in The Guardian are just one example among countless cases of fake news that [have] been successfully propagated as truth. I mean I can’t even begin to catalogue all the nuggets of fake news that have been used to keep the war in Syria going.

Who else is getting sick of all the #FakeNews posturing from mainstream media hacks who were doing it before social media was even invented? pic.twitter.com/kYGjXWosQz

There was no Iraq link to 9/11. And there were no WMDs. Yet the media lapped up the government’s carefully coordinated propaganda campaign uncritically. The Chilcot Report found many mainstream media articles leading up to the invasion of Iraq to be utter fabrications.

In his talk with RT, Miller argued that there’s a double standard at work here. The point being that the very corporate journalists rallying against ‘fake news’ are sometimes responsible for spreading it themselves.

– Play your part in the ongoing media revolution by reading and supporting new media organisations that do better. Please add more that you like in the comments: