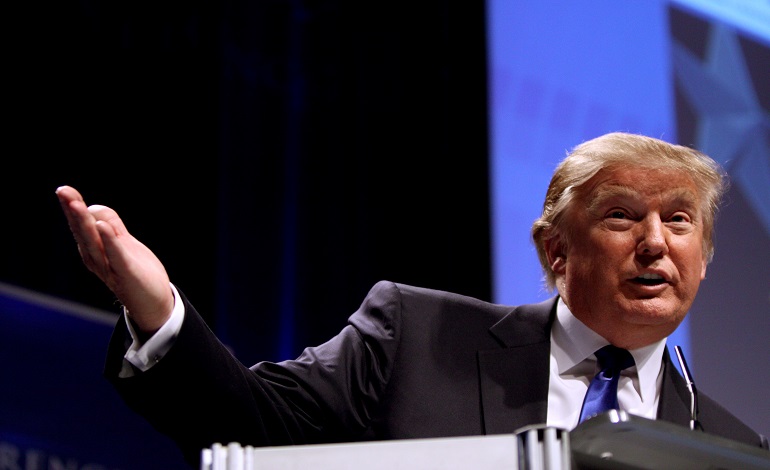 Of the various inaccuracies, bigoted comments, and downright lies spewed by Donald Trump during his election campaign, none became more synonymous with his attitude than “build the wall”. It was one of his earliest promises, a veritable bedrock of his candidacy. And the biggest stipulation to this wall along the Mexican border was that Mexico itself was going to pay for it. Trump literally got his supporters chanting it over and over again.

The whole point was that such ‘vital’ and ‘necessary’ tightening of US security wouldn’t cost American citizens a dime. The following clip from a rally in Vermont in January 2016 shows Trump making these specific assurances to his audience:

I’ll tell ya who’s NOT gonna pay for the wall: Vermont.

It will come as little surprise to many, then, that Trump has already asked Congress to foot the bill.

Trump first reneged on wanting to ‘lock up’ Hillary Clinton. He did that within mere days of his election victory. Having built his campaign almost entirely upon vilification of the former First Lady, her apparent untrustworthiness, and his insistence to see her “in jail”, he immediately U-turned in dramatic fashion. No longer intent on pursuing criminal charges, he even now referred to the Clintons, saying: “I don’t want to hurt them, they’re good people”.

As far as ‘draining the swamp’ was concerned, Trump later crowed to an audience in Iowa that he’d “hated” the slogan and found it “hokey”. That only later did he start saying it ‘like he meant it’. The President-elect doubtlessly just thought of this admittance as continuation of his candid rhetoric, but in fact he’d just casually admitted to the fact that he parrots words without meaning them. That he’s a liar.

In the same speech, Trump admitted:

you’ve been hearing me say the system is rigged, but now I don’t say it any more because I won. OK, it’s true. Now I don’t care.

He didn’t try to argue his election was fair and legitimate. Trump really doesn’t care. He is just fine with alleged corruption, as long as it works in his favour, achieving his goals. He doesn’t even shy away from acknowledging it. Unless you claim the Russian government was involved, in which case system rigging becomes positively out of the question.

Just in case there was any remaining ambiguity, Trump has made it very clear that he intends to refill the swamp. With pretty much the worst of the worst. The ranks of his cabinet are filled with corporate interests from the oil, tobacco, finance, and pharmaceutical industries. So once again, he’s doing the exact opposite of what he promised his supporters.

Now, the American taxpayer has been asked to pay for the wall. The cost will be tens of billions of dollars. To those voters who placed any stock in Trump’s election manifesto, it really is the most unashamed slap in the face. The very foundation of everything he claimed to stand for was a lie. Mexico was never going to pay for his wall, and he would have known that all along.

Trump’s support hasn’t dwindled in the face of pointblank lies and U-turns, so perhaps extorting the electorate is just a natural progression. What exactly will it take, for the American people to realise they’ve been had?

Trump has since tweeted, naturally, that the media are not telling the full story:

The dishonest media does not report that any money spent on building the Great Wall (for sake of speed), will be paid back by Mexico later!

The congressional liaison for Trump’s transition team, Chris Collins, backed up the US President-elect, saying:

I don’t think it’s that difficult for Donald Trump to convince Mexico that it’s in their best interest to reimburse us for building the wall.

The keyword to note there is “think”. In the world of politics, such a term is just about as ambiguous and unaccountable as it gets.

Not to mention, it’s highly unlikely that a sovereign nation would simply agree to pay for another’s building-works, especially after the event. Why would they? Particularly when the price has not been agreed in advance, and the purse strings were entirely at the discretion of another government. It seems almost wishful thinking. A bit like the UK’s hopes for Brexit.

That is, of course, unless Trump plans to ‘demand’, rather than “convince” Mexico. How might he do that? Whether it takes the form of sanctions, a trade embargo, tensions at the border, or God forbid even military action, the bottom line is that, one way or another, Trump plans to choke the money out of America’s neighbour. If not, he’ll have already made the American people pay for it. It makes little difference to him, after all.

By then, of course, Trump may well have denied ever saying anything about Mexico paying for the wall in the first place.

– See The Canary‘s previous articles on Trump’s wall and Mexico’s response to the US President-elect. Also see our other articles on Donald Trump and the US elections. All at The Canary Global.