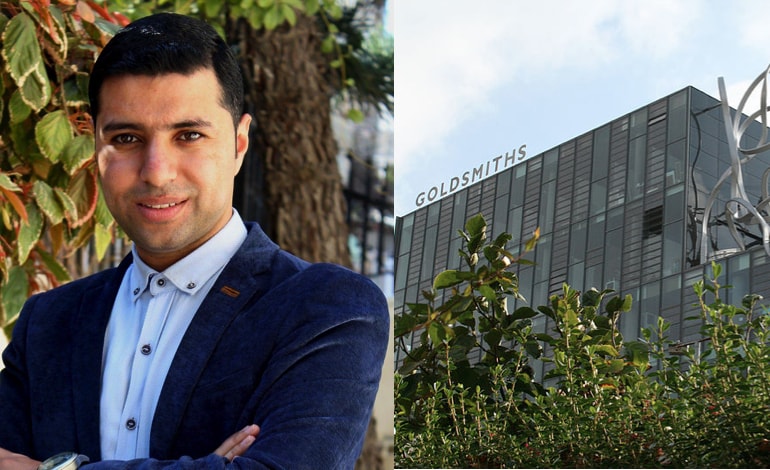 On 4 October, Theresa May told the Conservative Party Conference that, as Brexit gets underway, “the government is choosing a global Britain”.

And an hour before she spoke, a group of students put that speech into action by giving a newly arrived student to the UK a warm welcome that everyone – including Theresa May – could learn from.

On 4 October, Mohammed Awad landed at Heathrow Airport from Amman, Jordan. Coming from the Gaza Strip, he will study linguistics at Goldsmiths, University of London as a ‘humanitarian scholar’.

Until 1 October, however, he didn’t know if he could come to the UK and start his course. Because, as the Israeli and Egyptian governments control Gaza’s border crossings, people in Gaza need an exit permit to leave.

But after pressure from activists, foreign media, students’ unions, and an MP, Awad got approval from Israel’s Coordination of Government Activities in the Territories (COGAT) to exit Gaza. And he made his way to Britain.

After Awad landed, students from the Goldsmiths Palestine Society met him at Heathrow to welcome him. And they would take him out to eat in the evening.

And 200 miles away, Exeter Friends of Palestine had also welcomed him:

Exeter Friends of Palestine say congratulations to Mohammed Awad of Gaza, Palestine, who only today was awarded his exit…

The Canary learned from Israeli non-governmental organisation Gisha, and from COGAT, that Ahmed Agga and Amani Hania also received approval to leave Gaza on 3 October and study abroad. But others had a different fate.

Gisha told The Canary that Omar Alshawa, who had received acceptance from Imperial College London, did not get his exit permit in time.

And according to the Palestinian Civil Affairs Committee (PCAC) in Gaza, 239 people wanting to study abroad still had travel requests pending as of 26 September – out of 342 such applications in 2017.

On 2-3 October, The Canary asked COGAT about the application status of Agga, Alshawa and Hania; as they had to leave Gaza on 3 October to start their courses abroad.

A COGAT spokesperson told The Canary:

The residents [sic] requests were received at the Ccoordination [sic] and Liaison Administration to Gaza for the dates 17.10 and 24.10. Therefore, they have been taken care of in accordance to the request of the Palestinian authority. Upon receiving the requests, they were transferred for security evaluation.

The Gaza Strip is under the control of the terrorist organization Hamas that calls to perform terrot [sic] attacks against the State of Israel. Hamas is trying to take advantage of Israel’s aid for Gaza residents to transfer money to terrorist infrastructure, explosives and more. Nevertheless, *in order to assist the residents of Gaza*, Israel coordinates their crossings only after performing security evaluations in order to ensure the security of Israeli citizens.

The US and the EU have designated Hamas as a terrorist organisation. But the party is also the democratically elected government of Gaza, and labels itself “a national resistance movement”.

Gisha and PCAC spokesperson Mohammed Meqadmeh told The Canary that PCAC has to submit applications to COGAT at least 40 days in advance. So PCAC sometimes gives an exit date which is later than when a student needs to leave because, if it gives a date that is too soon, COGAT rejects the application.

Gisha also told The Canary that applications for study abroad must include all of the student documents; so COGAT knows when someone’s course starts, and when their student visa from the other country expires.

When it comes to exit permits, Shai Grunberg from Gisha told The Canary:

Israel’s ongoing and significant control over many aspects of the lives of Gaza residents comes with a legal responsibility to respect and protect the right of the people affected by that control.

In many cases, it is blatantly clear that no effort is made to strike a reasonable balance between legitimate security concerns and the right of residents of Gaza, including recognition of Israel’s responsibility to maintain normal life in the Strip, make the necessary arrangements for the prompt and smooth travel of students, and allow all those who need to travel to do so.

If Theresa May’s government really wants a “global Britain”, it can and should start by following the example of Awad’s welcoming committee, and defending the right to free movement of Palestinians and others around the world.