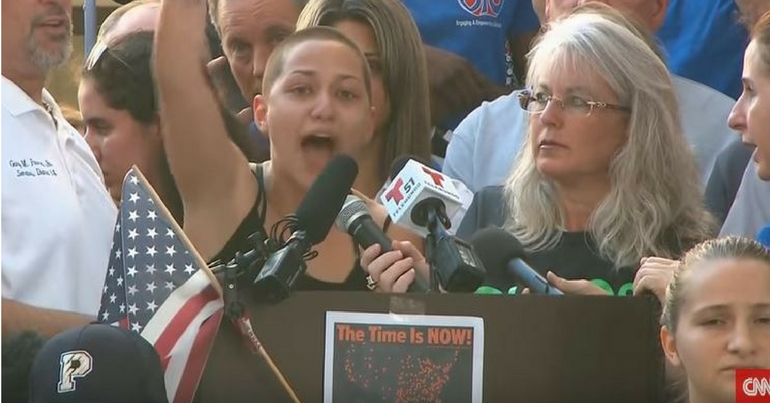 Emma Gonzalez is a student at Marjory Stoneman Douglas High School in Parkland, Florida, where 17 students and teachers were killed on 14 February. She gave an incredibly powerful speech at a rally in Fort Lauderdale in which she called out all the excuses for inadequate gun control:

Nothing and nobody was spared in her blistering attack:

Politicians who sit in their gilded house and senate seats funded by the NRA telling us nothing could have ever been done to prevent this. We call BS.

They say that tougher gun laws do not decrease gun violence. We call BS.

They say guns are just tools like knives and are as dangerous as cars. We call BS.

They say that no laws could have been able to prevent the hundreds of senseless tragedies that have occurred. We call BS.

That us kids don’t know what we’re talking about, that we’re too young to understand how the government works. We call BS.

Emma Gonzalez didn’t have a Twitter account before the shooting. At the time of writing, she has over 783k followers. By contrast, the NRA has over 568k. It’s clear where the momentum lies.

Before the 2016 presidential election, the NRA spent over $50m in political advertising in favour of candidates who supported gun ‘rights’ and against those who supported gun control. This included over $11m in ads for Donald Trump. It’s therefore no surprise that Trump has consistently refused to support any kind of gun control. He prefers the “big and very inexpensive” deterrent of arming teachers:

Armed Educators (and trusted people who work within a school) love our students and will protect them. Very smart people. Must be firearms adept & have annual training. Should get yearly bonus. Shootings will not happen again – a big & very inexpensive deterrent. Up to States.

There have been 291 school shootings in the US since 2013, according to monitoring group Everytown. After major tragedies, the support for gun control rises, at least temporarily. But the power of the gun lobby has meant that Congress has done nothing to tighten up gun control.

Walking out and standing up

But this time something is different. Students nationwide are standing up and saying enough is enough. All over the country, students have walked out of their classes. Students took part in a ‘lie-in’ in Washington DC to call for gun control. And a nationwide protest on 24 March is expected to attract half a million people to Washington DC alone.

All these events are led by young people. They are standing up and speaking out with power and dignity for the very basic right to be safe in school. And they’ve clearly touched a nerve in a nation devastated by gun violence.

By contrast, those in the NRA can only look on and spit fury as they sense the new mood. NRA chief executive Wayne LaPierre has blamed the problem on, amongst other things, the “failure of family”, “the national media” and “so-called European socialists”. Anything, other than guns. He can’t be happy that his organisation has been out-twittered and out-manoeuvred by an 18-year-old anti-gun activist.

The NRA is on the back foot at last. A young woman is making sure of that. Perhaps gun control in the US is finally on the agenda.

– Support March for our lives.