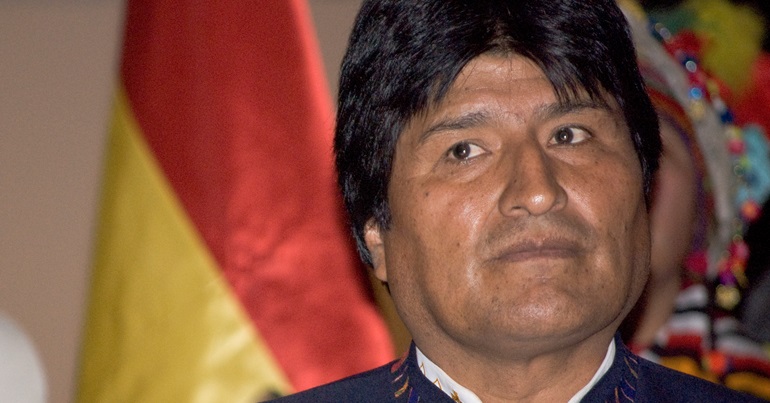 Bolivian president Evo Morales, whose government has overseen improving living standards and a dramatic reduction in poverty while in power, has been re-elected. This is yet another blow for the ongoing US campaign to get rid of left-of-centre governments in Latin America and boost their austerity-supporting opponents.

Right-wing hits out despite “no evidence” of irregularities

With around 99% of the final vote counted in the presidential election, Morales had secured almost 47%, defeating his nearest rival Carlos Mesa by over 10% and thus delivering a first-round victory. Mesa is a neoliberal former president with close links with the US. Both Mesa and the US have declared they will not recognise the result.

The US wasted no time in attempting to delegitimise the election, and the mainstream Western media has joined in. The Washington-based Organisation of America States (OAS) issued a statement as the count was still happening, expressing “concern” at the “hard-to-explain change in the trend of the preliminary results after the closing of the polls”. This is actually easily explained by the fact that rural areas, where there are greater levels of support for Morales, take longer to report their results. Mark Weisbrot, co-director of the Center For Economic and Policy Research, condemned the OAS statement for having “absolutely no evidence – no statistics, numbers, or facts of any kind”.

This blatant interference aimed to undermine a democratic election that numerous international observers have scrutinised and praised.

Meanwhile, US-backed right-wing opposition groups in Bolivia have staged violent protests, including burning down electoral offices, in a coordinated attempt to derail the democratic process. Morales denounced this destabilisation campaign as an internationally-supported coup plot.  The US had previously backed the ‘media luna’ coup attempt of 2008-09 and provided funding to opposition groups involved.

When Morales was first elected president in 2006, he pledged to end neoliberalism, which had kept Bolivia locked into underdevelopment and economic stagnation. And his economic policies have since ushered in a national transformation. From 2006 to 2017, for example, his government slashed Bolivia’s poverty rate from 48.1% to 24.7% – lifting millions of people out of poverty. It achieved this by building a new model of development that embraces the dynamic role of state intervention in the economy, and had increased the proportion of Gross Domestic Product (GDP) directed towards investment from 14.3% in 2006 to 21.4% by 2015.

This new economic model has seen Bolivia’s economy grow an average of 3.2% per capita between 2006 and 2018. Last year, Bolivia led Latin America with one of the region’s highest economic growth rates, at 4.7%. This is exceptionally high economic growth to sustain against the backdrop of the 2008 financial crash and the 2014 crash in commodity prices, which promoted deep economic crises and an economic slowdown elsewhere in Latin America. It also starkly contrasts with the approaches of right-wing governments in Argentina, Brazil and Ecuador, which have embraced austerity with disastrous consequences.

The increase in state investment that has driven Bolivia’s economic development and poverty reduction has been possible due to both the nationalisation of strategic sectors of the economy and the financing of the Central Bank, which coordinates with the Bolivian government to direct investment. In particular, Morales has increased resources available for social programmes and investment by nationalising the oil and gas industry. During the first eight years of his administration, “government revenue from hydrocarbons increased nearly sevenfold from $731m to $4.95bn”.

This additional revenue makes it possible to invest in sustainable industries, as part of Bolivia’s plan to diversify the economy and reduce dependence on raw materials and fossil-fuel exports. On 1 October 2019, the first electric car to be manufactured in Bolivia was unveiled. The country has one of the world’s largest known reserves of lithium – a crucial component for the production of electric cars. Rather than just export this raw material unprocessed, Bolivia is investing in creating industry and high-quality jobs – including building a state-owned factory to produce batteries for electric cars.

Morales also has further ambitions to develop Bolivia, with goals to eliminate poverty and achieve food sovereignty by 2025.

US quest to reverse Bolivia’s progress

Washington, however, is intervening in Bolivia with the hopes of installing a right-wing government to privatise the country’s natural resources and industries. The last time Bolivia had a US-backed president was in 2005, when Carlos Mesa was in office. Neoliberalism failed to develop Bolivia’s economy, with per capita GDP basically stagnant for a quarter of a century.

When Mesa resigned in 2005, half of the Bolivian population languished in poverty and Bolivia’s economic affairs were directed by the US. This was exemplified by the fact that the controversial International Monetary Fund (IMF) had their offices inside the building where Bolivia’s Central bank was also housed. In his resignation speech, Mesa dismissed the idea of nationalising Bolivia’s natural gas as “unviable” because the US and World Bank “have told us so”.

To understand what would happen to Bolivia if the US successfully removed Morales from office and installed a right-wing stooge, one only needs to look at what is happening in Brazil. Since the US-backed Jair Bolsonaro became Brazilian president in January 2019, he has unleashed a radical neoliberal offensive, including aggressive privatisation.

The US offensive intensifies

This year’s Bolivian presidential election has taken place against the backdrop of Donald Trump’s big offensive against left-of-centre governments in Latin America.

The US has coordinated a campaign that has attempted to blame the Amazon fires on Evo Morales instead of the real culprit, Jair Bolsonaro. A Guardian article claimed Morales was a “murderer of nature“. The fires that affected the Chiquitanía area of Bolivia were rapidly extinguished after Morales mobilised the full resources of the state. Bolivia has subsequently launched an initiative to reforest the areas affected. Right-wing opposition protests in Bolivia in the run-up to the election, meanwhile, were presented on social media sites as mobilisations against Morales’s environmental record – when they were in fact demanding more regional autonomy and led by social forces representing agribusiness.

The idea that Morales is anything less than a world leader on fighting climate breakdown is absurd. In 2016, Bolivia spent more than any other country in the world on renewables as a percentage of its GDP. Bolivia is also serious about meeting its Paris Climate Agreement commitment to increase “the share of renewable energy to 79% by 2030 from 39% in 2010”. Bolivia is one of the nations least responsible for today’s climate chaos, and has called for a global carbon budget to be agreed that fairly distributes the world’s remaining carbon budget, with 89% going to the developing world.

Bolivia victory a boost for progressives in Latin America

The latest re-election of Morales is not just a victory for the left in Bolivia; it’s also a boost for all progressive forces in Latin America struggling for a better future and against US interference. But Trump will not give up, and his administration is now likely to intensify its intervention against Morales. The left’s success in Bolivia, however, is another sign that 2019 could be the year that the tables turn again in favour of the Latin American left.