CoP19: CITES needs to step up protection of endangered primate 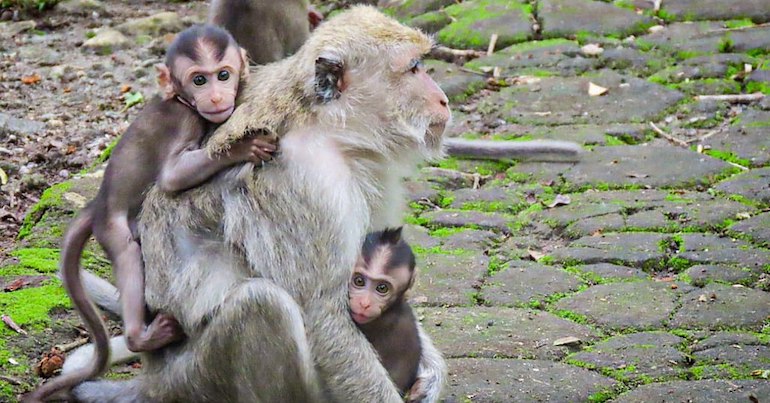 The global wildlife trade body must reevaluate the protections it provides to long-tailed macaques, according to wildlife- and primate-focused nonprofits. They made their case for reviewing current safeguards for the species during a side event at the Convention on International Trade in Endangered Species of Wild Fauna and Flora’s (CITES) conference of the parties (CoP19), which took place between 14 and 25 November.

The International Union for Conservation of Nature (IUCN) declared the long-tailed macaque endangered earlier this year. Despite this, CITES hasn’t yet reviewed the protections it offers the species.

Born Free and Action for Primates, among others, organised the side event at the conference. It aimed to raise awareness of the population trends and conservation concerns for long-tailed macaques. Most of all, given the event’s location and audience, the organisers wanted to draw attention to the threats that trade poses to the species.

CITES regulates the international trade in almost 6,000 wild animal species, and lists them in three appendices. These listings ostensibly relate to how at risk the included species are, and the trading rules differ accordingly. It currently lists long-tailed macaques in Appendix II. However, the IUCN updated its Red List assessment on the conservation status of long-tailed macaques in March. It determined that they are now endangered, in no small part due to the wildlife trade.

In particular, the medical research industry uses long-tailed macaques for toxicology and biomedical research. This use has grown in recent years, resulting in a “marked increase” in international trade, the event organisers said.

Trade for research is unsustainable

The IUCN Red List assessment warned that the trade in long-tailed macaques for research is a significant threat. According to trade monitors, countries such as Indonesia, the Philippines, Cambodia, and Vietnam, among others, have been exporting high numbers of them for many years in an “extremely unsustainable” way, the Red List highlighted.

According to materials distributed by the wildlife groups at the CoP19 event, China declared the greatest amount of exports between 2011 and 2020. Mauritius is another key exporter. Meanwhile, the primary destinations for the primates during that period included the US, Japan, some EU member states, and the UK.

The materials indicated that, according to CITES trade data, countries traded more than four million long-tailed macaque “specimens” between 2011 and 2020. The data suggested that 439,624 of these specimens were “live”, meaning that the trade likely involved at least that many individual primates. The actual total could be higher, as the term ‘specimens’ can refer to living individuals even if the data doesn’t explicitly include the term ‘live’, due to inadequacies in the CITES trading system.

As the Australian nonprofit Nature Needs More has pointed out, the CITES permit system is predominantly paper-based, rather than electronic. This archaic system carries a high risk of permit fraud, and lacks the capacity for real-time reporting, which enables “massive abuses of the legal trade system”, the non-governmental organisation warned. Nature Needs More is calling for widespread reform of how the wildlife trading body operates, including bringing the permit system into the 21st Century.

The international trade in long-tailed macaques isn’t exempt from the risk of such abuse. Most traded individuals are meant to be, for example, captive-bred. The wildlife groups found that CITES trade data showed 71% of live exports between 2011 and 2020 had this designation.

But Action for Primates’ co-founder, Sarah Kite, told the Canary that the increased demand in recent years, along with a Chinese ban on long-tailed macaque exports due to the Covid-19 pandemic, has:

intensified the pressure on wild populations in countries where the long-tailed macaque is native, raising concerns about an illegal trade and the validity of captive breeding claims by supply companies.

Action for Primates supports a ban on the global trade in long-tailed macaques for research and testing, Kite said.

Such concerns about illegality came to a head recently, when the US indicted eight people, including Cambodian officials, over their alleged involvement in a long-tailed macaque smuggling ring.

The indictment alleges that the Cambodian officials conspired with the owner and employees of a Hong Kong-based company – Vanny Bio Research – that supplies primates for research. They stand accused of smuggling potentially thousands of wild-caught long-tailed macaques through the company’s Cambodian facilities under the pretence that they were captive-bred.

According to Science, the US-based contract research company Inotiv – which owns Envigo Global Services and Orient BioResource Center – is among those that received primates from Vanny Bio Research. Contract research companies provide research services to the pharmaceutical and biotechnology industries.

Action for Primates’ Kite also said that it’s not just illegal activity that is negatively impacting wild populations of long-tailed macaques either. Wild individuals are legally captured in the countries they live in for use in laboratories. Additionally, these captured primates can end up in breeding facilities in those countries, with their offspring exported to laboratories overseas. These offspring are known as F1 primates in trade terms. Kite warned that this legal trade:

puts pressure on wild populations, especially as the numbers of macaques captured for domestic use as opposed for the international trade are unknown, because they are not required to be reported to CITES.

Due to the threats the species faces from trade, both legal and illegal, along with its endangered status, wildlife groups made a number of recommendations for CITES at the event.

These included that CITES parties, meaning countries, should use the CITES mechanisms at their disposal to ensure that “accurate and timely information” is available on the species’ conservation status in their source countries, as well as the impact and details of trade.

Not a silver bullet

They further called for CITES to commence a review of the trade in captive-bred operations specifically to determine whether such operations are acting responsibly. Born Free’s head of policy, Mark Jones, told the Canary that:

We would hope that the major importing countries would support the inclusion of the species in the review, in order to help provide them with confidence that claims of captive breeding are credible, particularly given the recent US indictments of Cambodian officials.

Finally, the groups have called for CITES to consider whether long-tailed macaques would benefit from an Appendix I listing. This listing provides the highest level of protection that CITES offers.

Kite pointed out that while the uplisting wouldn’t end the commercial trade in captive bred primates, it would:

at least enable greater scrutiny of the legitimacy of claims made by captive breeding facilities.

Given the clear issues with the trade in long-tailed macaques and their now-endangered status, there is no reasonable justification that CITES could come up with to refuse these demands.