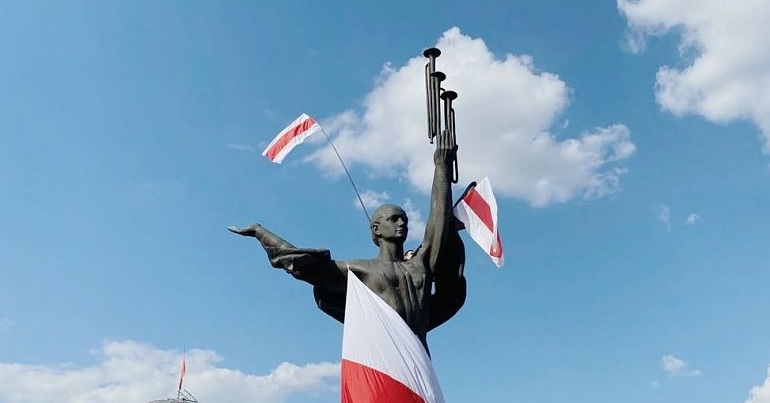 Correction: This article was updated on 15 November at 14.36 to clarify the fact that asset freezing implemented by the UK was done in line with EU legislation. The UK must uphold EU sanctions as a current member state.

The latest in The Canary‘s #FollowTheMoney series focuses on the EU’s freezing of the assets of the president of Belarus, Europe’s ‘last dictator’. The EU has frozen Alexander Lukashenko’s assets on the grounds of human rights violations.

An investigation into the Belarusian presidential election by the Organization for Security and Co-operation in Europe (OSCE) has also concluded that it was not genuine and did not comply with basic standards.

The OSCE Office for Democratic Institutions and Human Rights stated:

The observations by local monitoring organizations and citizens, as well as international observers with good reasons found the presidential election fell short of fulfilling the basic international requirements for genuine elections. Accordingly, the allegations that the presidential elections were not transparent, free or fair were found confirmed.

The investigation also said that the Belarusian government is responsible for human rights violations that were “systematic” and “proven beyond doubt”.

As the UK government detailed on its website, the OSCE investigation found “overwhelming evidence” that:

The elections were falsified

The OSCE investigation also said that the Belarusian government is responsible for human rights violations that were “systematic” and “proven beyond doubt”. It stated:

Regarding the allegations related to major human rights abuses, they were found to be massive and systematic and proven beyond doubt. It is particularly worrying that the well-documented cases of torture and ill-treatment in the crackdown by the security forces on political dissent have not, as yet, resulted in anybody being held accountable, which confirms allegations of general impunity, also due to the absence of fair trials in political cases.

The freedom of the press in Belarus has been a concern, which the investigation also highlighted. It stated:

The freedom of the media and the safety of journalists are under massive attack, as are the freedom of assembly and association and the right to liberty and security. However, elections and human rights abuses are related to each other. Without democratic and structural reforms, it cannot be expected that necessary legal reforms will have the desired effects.

They refused to let investigators into the country

The Belarus government refused to comply with OSCE’s investigation or to let its investigators into the country.

The UK government confirmed the obstruction and condemned its behaviour. It stated:

The UK condemns the efforts made by the Belarusian regime to undermine the independent investigation, including its refusal to cooperate with the fact finding mission or to allow the mission to enter Belarus. We strongly encourage Belarus to reverse its decision and engage constructively with the OSCE.

Europe’s ‘last dictator‘, Alexander Lukashenko, was re-elected in 9 August and has spent 26 years in power. Following his recent re-election, the EU froze the assets of the president of Belarus on the grounds of human rights violations.

The Office of Financial Sanction Implementation (OFSI) confirmed that Lukashenko has been sanctioned under the Global Human Rights Sanctions Regulations 2020.

Alexander Lukashenko…is ultimately responsible for the violence against protestors and journalists that have followed the disputed election result.

Lukashenko has not called out violence and has expressed support for security services. President Lukashenko has therefore been responsible for serious violations of human rights in the weeks following 9 August and has been involved in promoting such violations.

The gang’s all here

Lukashenko is not the only name on the list. Joining him is his son National security advisor, Viktor Lukashenko and the president’s Chief of Staff, Igor Sergeenko.

Together, they are the latest additions to a growing list of officials sanctioned by the EU, which also includes the president’s press secretary, the head of main directorate of law and order protection and prevention at the Ministry of Internal Affairs, the former state secretary of the Security Council, and the chairman of the KGB.

UK calls for a new election

Foreign secretary Dominic Raab has called for a new presidential election in Belarus. He said:

We pushed for this independent investigation and it has exposed the fraud at the heart of the presidential elections and the despicable actions taken by Lukashenko’s regime to suppress the Belarusian people.

New elections which are free and fair must now be organised, and those responsible for the violence against demonstrators held to account.

As one of the 17 countries that triggered the OSCE investigation in September 2020, the UK government has stated that it is committed to protecting human rights in Belarus, including the freedom of the press.

The OSCE has urged the Belarus government to cancel the results of the presidential elections that took place on 9 August 2020 because of the “irregularities at all stages of the process”. It recommends that the government announce a new election which upholds international standards.

In total, the OSCE have issued 65 recommendations to the Belarus government with a further nine being issued to the rest of the world.