Revealed: the government policy advisor with links to the far-right - Canary 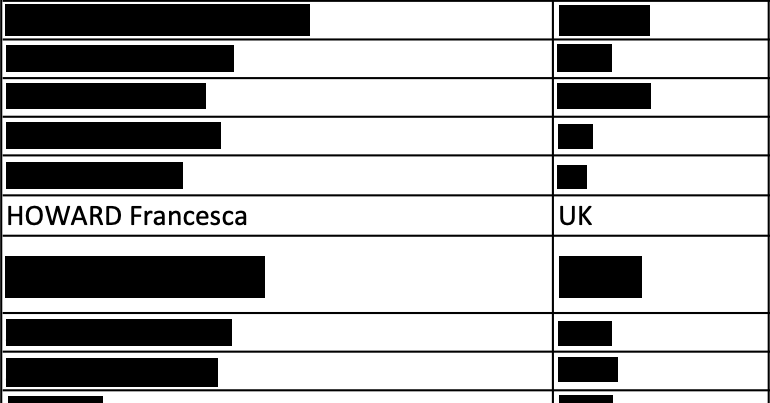 A policy advisor at the Department for Digital, Culture, Media and Sport (DCMS) has a history of far-right associations, The Canary can reveal. The DCMS is led by Nadine Dorries.

Francesca Howard previously worked for UKIP, and currently works for the government in cyber security. And there is a trail of association with extreme far-right figures, including to a Swedish party of Nazi origins, which raises serious concerns.

Members of the House of Commons are required to list secretaries and assistants in a register. Howard’s name appears in a register from December 2021. Her LinkedIn page also confirms that she worked as a research assistant, sponsored by Conservative MP for Nuneaton Marcus Jones, for nearly two years.

But Howard previously worked for UKIP at the European parliament and it is during this time that she formed connections with concerning groups.

An anonymous source has shown The Canary documents which list Howard, alongside others, who worked in coalition with UKIP under the Eurosceptic Europe of Freedom and Direct Democracy (EFDD) group. These documents show that Howard worked for UKIP during UKIP’s involvement in the EFDD.

During the eighth European Parliament (2014-2019) the EFDD was made up of several right-wing parties, including the far-right Sweden Democrats. The Sweden Democrats have neo-Nazi roots, and one of its founders was a member of the Waffen SS. As of summer 2021, it held 60 seats out of a possible 349 in the Swedish parliament. The party claims to have divested from its Nazi roots. But it’s also expressed the view that Islam is the biggest threat since WWII. It additionally wants to bring immigration down to nearly zero.

Our sources also provided The Canary with a photo showing Howard posing, amongst other UKIP staffers, with a member of the Sweden Democrats. In 2016, Hope not Hate published an article that featured UKIP figures, including Howard, with Carl Joel Ankar. As Hope not Hate wrote:

Pictured above is Carl Joel Ankar, formerly of the extreme-right Sweden Democrats, enjoying a drink with key UKIP organisers Jamie Illingworth and Francesca Howard. The jolly scene was uploaded as EFDD/UKIP staffer David McClure’s Facebook cover photo on 29 May 2016.

The Sweden Democrats is a far-right party that had to ban members from wearing Nazi uniforms to their meetings in 1996.

In documents seen by The Canary, an EFDD staff register lists both Howard and Ankar. The same article from Hope not Hate explains Ankar’s background:

Ankar was first investigated by European Parliament authorities following comments made on the hate website Flashback in which he called his former teacher “Jewish swine”, expressed support for apartheid and blamed domestic abuse victims for their “inability to absorb verbal criticism”. He has also written online that he trained to be a lawyer in order to better prosecute “leftish muppets and crooked Jews”.

The Canary reached out to DCMS with questions. We asked why Howard was able to take up a position in government having associated with far-right figures. A DCMS spokesperson said:

Public trust in civil servants is at an all time low. From PPE contract-related cronyism to scandals about government staff (from press officers to civil servants to MPs) breaking lockdown rules, there is a massive erosion of public trust for those in office.

Howard’s appointment to DCMS only adds to this lack of trust. It also raises a fundamental question. Given the background checks needed to work at parliament, it should be inconceivable that Howard’s background wasn’t examined. If that is the case, did DCMS take any steps to ensure that Howard no longer associates with far-right figures? Or perhaps, more worryingly, they just didn’t care.